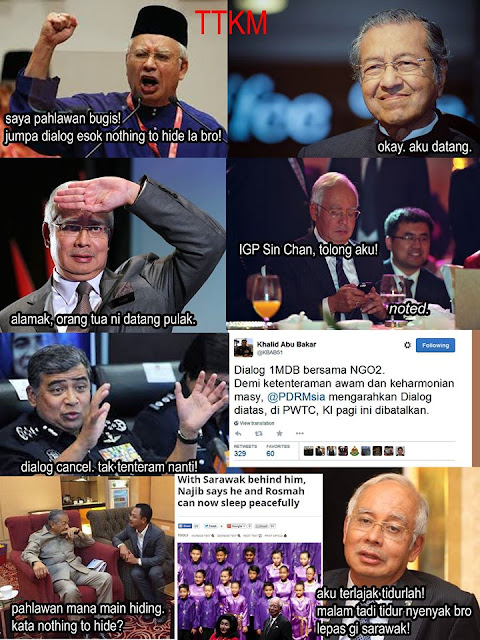 And so it has come to this : Tun Mahathir was stopped by the powers that be from talking about the goings on in Najib Razak's government - specifically about 1MDB. You can be rest assured that the police got their instructions to stop Mahathir talking directly from Seri Perdana and you know who lives in Seri Perdana : Rosmah Mansor and her effeminate companion, Najib Razak.

As usual, instead of using his brains to think about what it is that he should or should not do with Mahathir, Najib was sitting on it.

Yes ladies and gentlemen, Najib's brains is where his anus is!

To stop Mahathir from talking takes monumental courage or monumental stupidity and to make a decision on something as monumental as this within 48 hours of it happening will not do justice to the incident....but let us try.

Right of the bat we now know who is in charge of this nation. Certainly not Tun Mahathir!

No lah not even Najib Razak!

Najib Razak simply do not have the balls nor the gumption to do anything like this. He must have had the riot act read to him over breakfast this morning by the First Lady and by the end of that lecture Najib knew his days as her husband would be numbered if he did not do as she told him to do.

And so Najib must have tweeted to the biggest tweet of them all, that Police Inspector General (aka PIG) and told that tweet of a PIG to send his men to stop the old man from speaking to the NGO's about 1MDB at the "Nothing to Hide" dialogue. The one that Najib was also suppose to turn up at.

Did Najib stopped to think what doing that would do to him?

Of course he did not and cannot...remember his brains is in the same spot at his anus and he was sitting on it - so how can he think when he is sitting on his brain?

First you had to go and ask your cabinet colleagues to either support you on 1MDB or resign.

When you do that all that you are doing is to confirm that there is dissent within your cabinet re 1MDB.

Genuis may have its limit but stupidity does not - and nothing demonstrates the truth of that statement than Najib instructing the Police to stop Mahathir from talking.

Aisehman Najib, you are going to make a martyr of the old man! 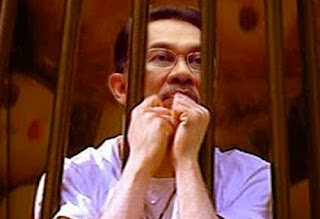 You have already made Anwar Ibrahim into one. Now you want to do the same to Mahathir? One martyr against you is not enough? You want two?

Now what can Mahathir be thinking of doing next?

Will he shut up or will he be thinking how does he get himself arrested and become a martyr!

Your guess is as good as mine but the only way he can top his signature move : leaving Umno, is to get himself arrested!

And from there you and me can sit back with some keropok and kuachi, a glass of ice tea or kopi O ice and watch the proceedings amongst the Umno guys get really hot and heavy!

Think of it....putting a 90 year old ex Prime Minister in the lock up for being a threat to national security! 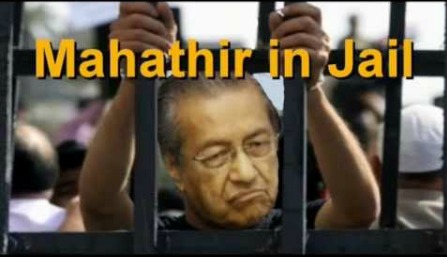 Where will Najib lock Tun Mahathir? In the VBIP ward at IJN or the GH?  Or will the AG designate Mahathir's  house as a temporary lock up zone and literally put the old man under house arrest?

Will they allow the other Tun in the family, Tun Siti Hashmah to stay with her husband in their own house or just allow her to visit him during visiting hours?

Jesus Christ my mind boggles at what will now happen even in the very first few minutes of hearing about Mahathir being prevented from speaking to the NGO's  and yet I am sure that the only thought on this idiot of a Prime Minister mind must have been what he would have to face at home if he did not do what Rosmah wanted him to do.

Back in those days when Najib and Bruce Willis still had hair, Najib was a randy bastard sowing his wild oats in Port Dickson and places unknown. Today he is just an old bastard under the thumb of a seriously domineering Flom who gets her kick from pushing our prime minister around! - steadyaku PAS should not rush its decision whether or not to "divorce" DAP, cautioned Selangor delegate Shafie Ngah.

He said it is not sufficient to debate the motion, raised by the ulama wing, in this muktamar alone.

"The motion is good, but think carefully. It is very easy to divorce someone, (just say) 'Aku ceraikan kau' (I divorce you).

"But what of our children, our property, the hopes of the Malays to see PAS and Islam advance forward, what of that?" he asked when debating the president's policy speech.

He proposed the debate on the motion to be held at a special muktamar, similar to the one held when PAS decided to join Pakatan Rakyat.

"Bring this to a special muktamar, let us discuss this for two days and two nights. It is not enough to debate this for 30 minutes," he said.

Shafie was referring to the motion approved by the Ulama council on Wednesday, to formally cut off ties with DAP.

Shafie, who is also the Bangi assemblyperson, said PAS should not be fighting with Pakatan, especially in Selangor where they have almost defeated BN entirely.

"Selangor Umno, and BN dah mampus (dead). Let us meet them and bury them deeper in the next general election.

"But let us not fight with Pakatan, we are not focusing on the right thing (to capture Putrajaya), he added.

Meanwhile Johor PAS delegate Mohd Mazri Yahya felt that the problem with PAS and its leaders, is the inability to control emotions.

"The problem with us, our members and our leaders, is that we have a problem controlling our emotions.

As such, he said PAS' disciplinary committee should nip the problem in the bud before it gets worse. - mk