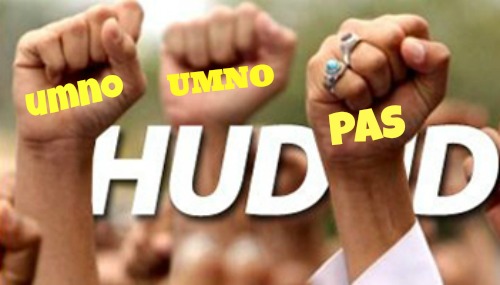 PAS president Abdul Hadi Awang's Private Member's Bill to pave way for the implementation of hudud won't discussed in the Dewan Rakyat without the consent of the Yang di-Agong Pertuan Agong.

Culture and Tourism Minister Nazri Abdul Aziz said any bill related to religion must receive the green light from the Conference of Rulers before it is brought to Parliament.

"At the federal level, the Agong is the penghulu (head) of Islam.

"How can we discuss a bill on hudud when the Agong has not even been briefed? That is kurang ajar (insolent)," Nazri, who was former law minister and former minister in charge of parliamentary affairs, told Malaysiakini in an interview on Saturday.

He said the right move would be for Hadi, the Marang MP, to seek an audience with the Agong to discuss the matter.

However, Nazri could not confirm if Hadi could have obtained the green light by now.

In 1993, the Kelantan government passed an enactment stipulating punishment, such as death by stoning, death by crucifixion and amputations, among others.

However, the law could not be implemented as the Syariah Courts (Criminal Jurisdiction) Act 1965 limits the syariah court on imposing a maximum jail term, caning of up to six strokes of the rotan and a maximum RM5,000 fine or a combination of penalties.

Hadi tabled his Private Member's Bill on March 19 to have the Act amended. As of today, there is no sign that the bill will be debated during the current session of the Dewan Rakyat.

Nazri said while he does not strictly oppose hudud, despite having called those discussing the implementation of hudud "stupid" because it was unconstitutional, he said he was against PAS being disrespectful of the nation's institutions.

"I say 'no' because they are not respecting the system. They need the Agong's consent first," he said.

Once the Agong gives the green light, he said, Umno MPs would be compelled to vote for Hadi's bill.

'I am enlightened, they are not'

However, even with Umno's support, Nazri said there was no way Hadi's bill could be passed because a two-thirds vote is needed to amend the Federal Constitution.

"I see no way this can be done. I am enlightened, these people (in PAS) are not. I was telling them not to waste their time," he said.

Moreover, Nazri said, on matters concerning religion, BN would not use its whip to compel non-Muslim MPs to vote for a bill.

"There should be a vote of conscience," he said.

In view of this, Nazri concluded that it was likely that Hadi was pushed for the implementation of hudud for his own political reasons only.

On the 12 Kelantan Umno state assemblypersons who voted for the bill to amend the Syariah Criminal Code (II) Enactment 1993, Nazri said it was the right thing to dos, since the Sultan of Kelantan Sultan had supported it. - mk

Engineer jailed and fined for up skirt video...