Speaking at a forum at the KL Chinese Assembly Hall, the said her father underwent a minor procedure this morning at Kuala Lumpur General Hospital, where a small polyp in his kidney was detected.

“Hopefully, it is not cancerous as it is very small,” she said, adding that a histopathology would be carried out soon to determine the true nature of the polyp.

According to her, Anwar had been experiencing irregular blood pressure and black stools for some weeks now.

She also said that while his deteriorating health condition was brought to the attention of the prison doctor, Anwar still had to wait for clearance from Home Minister Zahid Hamidi before proper medical treatment could be sought at the hospital.

She also said her family had written numerous times to the doctor and prison authorities but ended up waiting three weeks before the Home Ministry gave Anwar clearance to go to hospital.

Anwar underwent an MRI scan and had an X-ray taken for a bad shoulder on Tuesday and is due back in prison tomorrow, Nurul Nuha said, adding that biopsy results will only be out next week.

Speaking on behalf of her family, she pleaded with the Home Minister to refrain from denying her father medical attention in the future and to put politics aside in view of her father’s fragile health at this moment. - fmt

“I would like to once again repeat that repayment of the debt does not absolve the borrowers from responsibility for losing the money in the first place.

“The money is not lost through bad businesses but has simply disappeared. Somebody knows how the money disappeared and who has the money now. But that somebody is not telling,” he said in his blog posting today.

He said that the restructuring plan which was presented to the Malaysian Cabinet last Friday would not erase the fact that money borrowed by 1MDB has disappeared, and that the Malaysian government will lose billions of ringgit.

“Part of the loan may be redeemed but a very substantial amount will remain. Certainly the restructuring will not result in the lost money being recovered,” he said.

He also repeated his warning that Prime Minister Najib Razak will have to face legal actions for his role in the 1MDB's losses.

“There is too many evidence of cover-ups by politician and civil servants. When Najib is defeated and I believe he will, in the next election, there will be no stopping the legal actions which must follow.

“I hope the restructuring will help but unless the lost money is returned, paying off debts will absolve no one,” said Mahathir who had been calling for Najib to be replaced in order to save Umno and Barisan Nasional.

He had blamed Najib's weak leadership and incompetence in the problems besieging 1MDB which reportedly has debts amounting to RM42 billion.

Last week, the government announced that apart from the restructuring plan, Abu Dhabi-based IPIC will invest US$1 billion in 1MDB to allow the firm to pay off debts to a group of syndicated banks.

Mahathir also questioned the nature of this investment in 1MDB.

“It is not a loan as claimed by the 2nd Finance Minister. Certainly it is not a free gift. What does IPIC get for its US$1 billion from 1MDB. It must be the assets of 1MDB,” said Mahathir.

He added that IPIC may be putting in another US$3 billion into 1MDB.

He said that 1MDB had purchased government land at a cheap price, even suggesting that the price paid by 1MDB for government land reflected an abuse of authority. He added that the right thing to do was to pay the market price of the land before it was developed or disposed of.

He also pointed out that if IPIC pays US$4 billion to 1MDB, effectively IPIC will become the owner of the assets of 1MDB.

“1MDB actually gets nothing as the money from IPIC will go towards paying the interest and loans of 1MDB to reduce the total loans of RM42 billion to a smaller amount.

“On this smaller loan 1MDB would still have to pay interest until money is found to pay off the principal. So, how does this restructuring benefit 1MDB?” he asked.

He said that the IPIC investment in 1MDB meant the government had lost control of 1MDB to IPIC, and any development of the land would accede to IPIC.

“The deal would result in the Malaysian government losing billions of ringgit unless market price is paid for TRX and Bandar Malaysian land.

“1MDB would still have to pay interest on the balance of the loan and eventually billions of ringgit to settle the loans. Having lost the most valuable part of its assets, how does it raise money?” he asked again.

He also said that 1MDB would still have to sell off the power plants but added that since 1MDB paid higher than market value for the plants, it will not be able to list it or sell at the purchase price.

“It will have to lose at least RM3 billion simply to get rid of the plants,” he said. - berita daily

In the wake of an overwhelming show of support in Sarawak and the chief minister serenading him with praises, Prime Minister Najib Abdul Razak is confident of sweet dreams with his wife Rosmah Mansor tonight.

But it could turn into a nightmare when dawn breaks.

For tomorrow promises to be a day of days since the talk in town is that Dr Mahathir Mohamad would come face-to-face with Najib in a dialogue session.

The organiser claimed that Najib confirmed his attendance while Mahathir's aide revealed that the former premier would most likely be present.
If this is the case, expect fireworks at the session themed "Nothing to Hide" since Mahathir has accused the prime minister of having much to conceal.

Knowing Mahathir, he would not let an opportunity slip to grill, roast, smoke and bake Najib in the presence of the media.

Furthermore, it is touted as a no holds barred event, where participants can quiz the prime minister on all issues, such as the 1MBD conundrum and even his personal wealth.

Since Mahathir called for Najib's head to roll, numerous quarters have suggested a public debate, which the former premier has agreed to but the prime minister keeps evading.

Hence, observers are taking the claim about Najib willing to attend the session with a fistful of salt.

Detractors often state that the prime minister cannot face the heat on his own, and therefore requires a public relations team to script his words and orchestrate his actions.

Love or loathe him, Mahathir, on the other hand, has an admirable trait, which is his courage. And this has not mellowed with age nor has his razor-sharp mind.

Perhaps, Najib has awoken the snoozing lion within himself, given how he has warned his detractors not to underestimate him.

Furthermore, the prime minister proclaimed that the blood of warriors is coursing through his veins.

So is Najib now prepared to lock gaze with his nemesis instead of battling him through his blog and speeches, which violates the warrior code?

Some also claim the session could be a trap for Mahathir, with the aim of embarrassing the former premier in public by raising and exposing contentious issues during his tenure?

Hot on the heels of PM's ultimatum

The dialogue session comes hot on the heels of the prime minister's ultimatum to his ministers to either walk with him or walk out the door.

But that is no surprise, for such a drastic action would require an important facet - a backbone. Since a large number of political creatures happen to be invertebrates, quitting is not an option.

Deputy Prime Minister Muhyiddin Yassin has remained silent on the matter while Najib's cousin Hishammuddin Hussein dismissed rumours of his resignation, which followed a stir caused by his three conditions - 1) rationalisation of 1MDB,  2) accountability if there is wrongdoing, and 3), transparency on (conditions 1 and 2).

The defence minister, however, did not disclose his next step if the conditions are not fulfilled, preferring instead to elaborate on his unbreakable bond with Najib.

The question of accountability also revolves around the prime minister, who chairs the 1MDB advisory board, since his green light is required for all important decisions.

It was interesting to note Rural and Regional Minister Shafie Apdal's response when quizzed on whether he would resign.

Refusing to do so, he argued there is no reason to resign for asking questions on matters of public interest.

In other words, Shafie meant that those who cannot answer the questions should quit and not those who posed them. Perhaps, he had Najib in mind.

And now, Ahmad Zahid Hamidi has revealed on which side of the fence he stands.

Calling on ministers to do the "honourable thing", the home minister, who himself should have resigned after the FBI letter saga, told his colleagues to quit if they cannot agree with the boss.

For Najib and his lieutenants' sake, hopefully none of them subscribe to the warrior code of 'bushido', which would require them to disembowel themselves. - mk 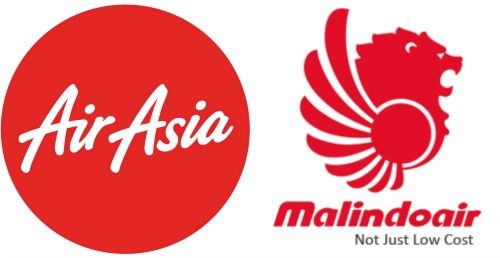 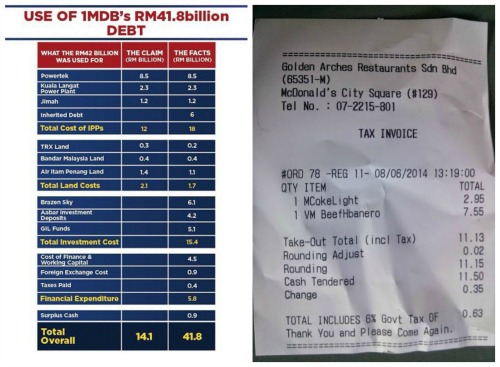 When I spend $11.15 at McDonalds I get more information from the receipt McDonald gives me as to what that $11.15 was spent on than the above information from 1MDB that list out where RM41.8 billion of our money went! - steadyaku47