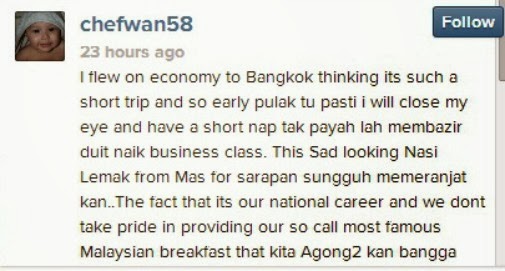 “I flew on economy to Bangkok thinking its such a short trip and so early pulak tu pasti i will close my eye and have a short nap tak payah lah membazir duit naik business class. This Sad looking Nasi Lemak from Mas for sarapan sungguh memeranjat kan..The fact that its our national career and we dont take pride in providing our so call most famous Malaysian breakfast that kita Agong2 kan bangga serata dunia and to show case this on international flight without the proper timun and kacang serta ikan bilis nampak macam miskin sangat sarapan Malaysia ini. Kita orang Malaysia sudah pasti la tahu akan quality Nasi lemak serta pilihan lauk2 that goes along with it but hey….what about all that international travellers. Seriously i feel sad that our Msian Breakfast can suffer its own image so misleading to the point where i felt the need for them to realised how serious this can be. Why la so much in consistency when it come to serving This dish at various destinations? Why my flight ticket cost me rm850 tu maka its not business class enough ke that i am serve Nasi and Sambal with telor that make my breakfast so mcm ” Telanjang la” Come on la Mas tak kan kita nak selalu membebel pasal simple basic thing of serving the country national heritage food and dah macam pahat serta pemukul? Why sent letters to act on my complain and appology and then repeat back the same mistake? Hello am i being to difficult here or being sensible to request for a normal Nasi Lemak?” 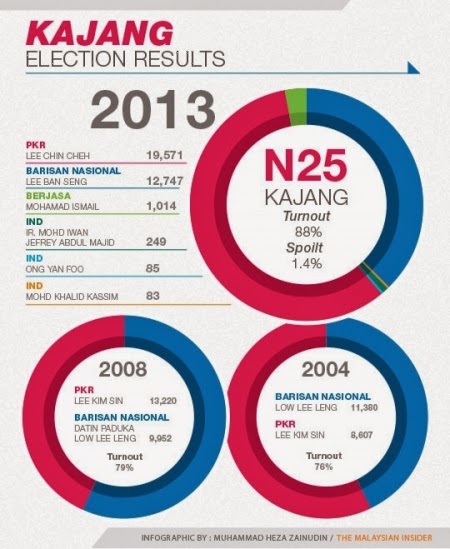 Kajang bid not to distract from sodomy case...

The decision by PKR de facto leader Anwar Ibrahim to contest in the Kajang by-election is not to divert attention from his sodomy case appeal this month, but to bring Selangor to greater heights, a senior academician has said.

Universiti Malaya Centre for Democracy and Elections (Umcedel) director professor Mohammad Redzuan Othman (left) opined that Anwar is already immune to court cases as he has faced a slew of them since 1998.

"Since 1998, Anwar has been in and out of courts and I do not think his move to contest in Kajang is to divert the attention away from then prosecution's appeal to his sodomy II acquittal as he is already used to being in and outside of courtrooms and has even served jail term.

"The fact is, the people are also aware of other high-profile cases like the Port Klang Free Zone (PKFZ) scandal and other matters that sees the failure of the prosecution (to garner convictions) and government's handling of them (by not appealing) compared to Anwar's case," he told Malaysiakini.

Redzuan said the bigger picture of Anwar's move to contest in a Selangor state seat is to consolidate Pakatan's position and to ensure the opposition retains the state in the next general election.

The prosecution's appeal will be heard on Feb 12 and 13 at the Court of Appeal. Whether Anwar is convicted or acquitted again, legal proceedings will probably go on.

Certain quarters like former MCA president Dr Chua Soi Lek, have said Anwar's decision to contest in the Kajang by-election is to divert attention from the sodomy appeal.

The matter was also raised again yesterday in Umno owned daily Mingguan Malaysia in quoting Perkasa vice-president Zulkifli Nordin, who was once with PKR.

This, would also help resolve the feud between Khalid and PKR deputy president Azmin Ali (right), he said.

The Social Science faculty dean who is an advent political observer, added Khalid lacks the political acumen to counter the threat posed by BN.

He also pointed out the seizure of the Al-Kitab bibles, failure to address rising house prices, and the uneven roads and potholes in the state, are problems Khalid have yet to solve despite entering his second term.

Redzuan said there have not been much improvement in race relations following the seizure of the bibles.

The economy is also not in good shape following a drop in the prices of rubber and palm oil, and the hike in prices following the withdrawal of subsidies.

PKR party insiders also say that Khalid's failure to address the water issue in the state is another reason why the party is massing against him.

“I think Anwar sees that Selangor should be a model state for Pakatan and the other states in the country as they view the development in the Klang valley with much interest.

"If Anwar is successful in solving the issues here, it would reflect well on him,” he said.

“If he manages to make improvements in all these aspects, it would also improve the opposition's chances in the next polls and pave its way to Putrajaya.

"Khalid (left) is seen not pro-active in resolving some of these problems as he is not a politician but a corporate leader. Anwar is seen as an international figure who has the top-down approach to reach out the people,” he said.

Redzuan also sees Khalid as being loyal to Anwar, to the point of relinquishing the Selangor MB's post, as he had announced the opposition leader's candidacy in a show of solidarity.

However, he said BN may have a tough time if it decides not to contest in this by-election, as it would be deemed weak.

"If it puts up an Umno candidate, it will receive a backlash as a MCA candidate is traditionally named. But if they put up a candidate from MCA, it may not get the full Chinese support.

"So BN is seen as truly placed in a corner in this contest," said Redzuan.- malaysiakini