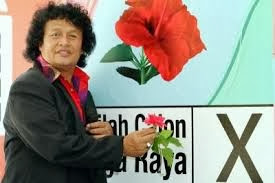 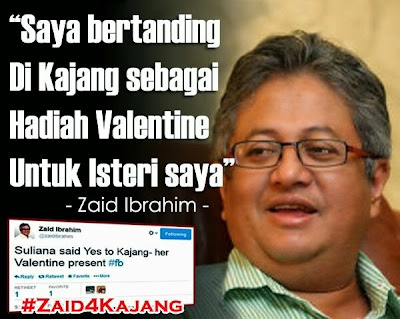 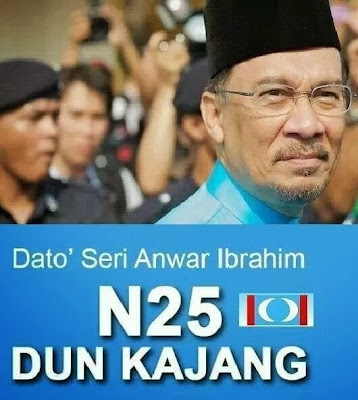 Zaid Ibrahim - a wise court jester for Kajang? Why not...

Well, why should that be surprising? News reports have speculated that the former de factor law minister may be throwing his cap into the ring in Kajang.

This is based on the latest entry "Mulling over Kajang", in his blog he themed Zaidgeist, a pun on zeitgeist, the German word which speaks of the spirit of the age, the underlying idea or concept that influences fashion or intellectual thought of a particular time.

In the posting, Zaid wrote that he may be joining the fray, if only to use it as a platform to air his ideas for a better Malaysia and to nudge the hands of policymakers.

First off, why not? The more the merrier as people say and Zaid really does have ideas that seems well rounded and grounded, or perhaps he just knows what to say. He is a politician after all.

Zaid's pondering came in the wake of the cult of detractors drawn to the sleepy 'satay' town by the gravitas of Opposition leader Datuk Seri Anwar Ibrahim who is contesting,

Like so many ronins, the masterless samurai of Japan's past, looking to ‘kill’ Anwar, the erstwhile Yojimbo or Nameless One of Malaysian politics, hoping to please the BN, and perhaps gaining tenure and stipend in the armies of the ruling coalition too.

And Zaid with his on and off again camaraderie with Anwar also seems likely to gravitate to the scene as stated in his blog, as an independent.

It is unlikely that his 'principles' will allow him to join the ronins who canvas for BN support, he himself having left the ruling coalition on principle after apparently failing to move for legal reforms.

But having just less than amicable ties with the opposition after his abrupt departure from there as well and after claiming he had failed to move for structural reforms and unity within the pact, he probably won't be expecting support from that quarter either.

Despite Zaid's exuberance in this new idea, I doubt it will mean anything more than just another drop in the Malaysian political maelstrom.

For Zaid, despite the sense that he often makes in his opinions, has exhibited a lack of gumption to carry through with what he preaches in the past. When he fails to get his way, he quits.

And that is the point, he preaches but never does, he speaks of good ideas but he doesn't play well with others and doesn't seem to have the patience or commitment to follow through.

His short term experiment and later disenchantment with obscure political party Kita, is another case in point, as they say, third time's the charm.

Given that Kajang too is a semi-urban seat, a small town just slightly bigger than Hulu Selangor, it does not speak well of his chances of not losing his deposit.

Then again, Zaid clearly said he had no illusions of winning, his main contention was being heard beyond the platform of his blog, and feeding the dialogue for nation building.

So perhaps he should go off on a limb in Kajang, as even though what Zaid says may not be the zeitgeist of our time, he does have this knack for saying the right things and encompassing the mood of the moment.

The third voice if not the third force, the wise court jester if not the outmoded Don Quixote.- Hazlan Zakaria, The Ant Daily

Tiong Lai,if Anwar is responsible for Ops Lalang, what about Najib..

If PKR de facto leader Datuk Seri Anwar Ibrahim is the one responsible for causing the infamous Ops Lalang crackdown in 1987, then what about the role of Prime Minister Datuk Seri Najib Razak who defended the former’s actions during that period?

That is why MCA president Datuk Seri Liow Tiong Lai may be treading a dangerous path by “reminding” the Chinese community in Kajang that Anwar was the one who caused Ops Lalang because he deployed teachers who did not comprehend Mandarin to Chinese schools.

Political observer Lim Hong Siang told theantdaily that if Liow persisted in using this argument as reported, then he would also need to defend Najib’s position during that period as well.

“If the same standard is applied, then he would be hitting out at Najib as well as the latter defended Anwar during Ops Lalang. Najib was the Umno Youth chief then and he organised a rally to defend Anwar during that period.

“If Liow is going to attack Anwar using this issue, then how is he going to defend Najib who was there defending Anwar then? If you want to use this issue to attack him personally, then the same standards should apply,” he said.

It was reported that in a Kampung Baru stadium rally in 1987, Najib had addressed thousands to counter demonstrations by Chinese-based parties and education boards over appointments of education officers in Chinese schools.

It was reported that Najib had allegedly led the rally and in his speech, vowed to bathe the keris with Chinese blood but he denied making those remarks when questioned by the opposition in parliament.

Liow was reported to have blamed Anwar for suppressing Chinese education in 1980s when the latter was the education minister which stirred dissatisfaction within the Chinese community and ultimately resulted in Ops Lalang where 108 politicians and activists were arrested.

“Memories of the crackdown are still fresh in the minds of the Chinese educationists. From what happened, we can see that he (Anwar) is a man with many promises, but can’t deliver them.