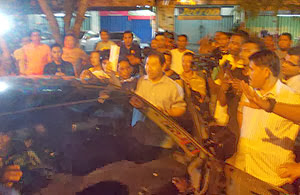 A scuffle nearly broke out in Bukit Gedung last night as PKR director of strategy Rafizi Ramli was about to leave the site after giving a ceramah on the forthcoming Kajang by-election and the ill-effects of the goods and services tax (GST).

After speaking to reporters for about five minutes following his 40-minute ceramah in the Bayan Baru neighbourhood, an elderly man approached Rafizi to hand over a memorandum on housing problems in the state.

According to the man, a house in Waterfall Garden will be demolished at the end of the month, on Feb 28.

It is learnt that the house - which allegedly faces demolition by the authorities - belongs to Najib Darus, 62, who had been in the area last night to ask for Rafizi's help on the matter.

The incident which happened around midnight was witnessed by Penang Deputy Chief Minister I Rashid Hasnoor, while others present were Batu Uban assemblyperson T Jayabalan.

Plainclothes policemen were present and managed to prevent the groups from attacking each other.

Others in the group are often seen taking part in anti-Pakatan rallies in the state since the coalition took over power in 2008. 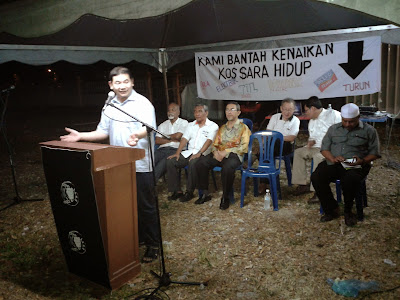 However, the Pandan MP, heavily guarded by his supporters, including Bayan Baru MP Sim Tze Tzin, carted him away, pushing through the crowd to the Toyota Camry that was waiting to send him off.

As he entered the car, tension rose as the PKIM members began to surround the vehicle, expressing dissatisfaction that the MP did not stay longer to engage with them.

Rafizi then got out of the car and said, "I have received your memorandum and will look into it."

He then told the group not to behave badly as people often thought Umno supporters usually do.

As the car ferrying Rafizi left the scene, a shouting match began between the group and PKR supporters, there was some pushing and shoving but it stopped short of breaking into a fight as the crowd started to disperse.

When one of them shouted that Malay houses were demolished, one from the other team shouted back, "Are you Malay?"

As PKIM’s Aminah (left) was leaving, she said: "He (Rafizi) says he wants to meet the people but when the people come, he is afraid."

The former PKR Penang Wanita chief, now a vocal critic of the state government, was accompanied by her husband, Mohd Rofi Osman, a staff of the Penang Municipal Council’s Health Department.

Earlier, Rafizi told reporters that the timing of the sacking of more than 20 contract employees by a Selangor State Development Corporation (PKNS) subsidiary was "not opportune" as PKR was gearing up for the Kajang by-election.

"But it is okay. If anything, it is an example of how we stick to trying our best to be transparent. We have to be extremely transparent about it and let due process take course," Rafizi said.

"Politically, of course, it is not an opportune time. It allows for speculation to fly," he added, referring to PKR deputy chief Azmin Ali's allegation that the sacking was Selangor Menteri Besar Abdul Khalid Ibrahim's way of using state powers against his rivals.

"But while I think the timing is not opportune, in normal circumstances, it could just be a restructuring matter that would have gone unnoticed," Rafizi said.

Endless talk of Khalid being forced to quit

PKR de facto leader Anwar Ibrahim is to contest the Kajang by-election, which has been fixed for March 23. Nomination day is March 11.

The seat became vacant with the abrupt resignation of Lee Chin Cheh of the PKR on Jan 27 to make way for Anwar to contest the mixed Selangor constituency.

The by-election has given rise to endless speculation that Khalid will be forced to resign as menteri besar to make way for Anwar, while Anwar and Azmin have been criticised heavily by all quarters for causing the ‘Kajang Move’ to solve PKR's internal feud.

"These are all speculation... speculation that Khalid is this and that...Khalid has denied he will resign, Anwar has denied it and there is nothing on paper. The question never arose until we were criticised," Rafizi said.

On Anwar's potential entry into the Selangor government, Rafizi reiterated that one must not underestimate the issue of "political legitimacy".

Even if Anwar is merely an assemblyman, being a part of the Selangor state legislative assembly gives him the full legitimacy to confront Umno, Rafizi added.

"It may not be a big issue for the public but every time Anwar speaks about Selangor, Umno immediately ridicules him, saying he is just a RM1 economic adviser," Rafizi explained.

"It is also a culture in Pakatan Rakyat that we (the member parties) do not interfere in what happens in the state. We cannot tell them what to do and be seen to overstep the state government in confronting the political games of Umno," he added.- malaysiakini