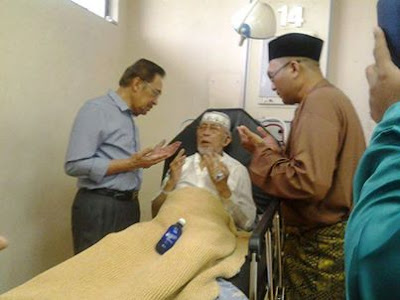 Malaysian prime ministers display fascinating quirks and characteristics; Dr Mahathir Mohamad assumes the role of the Pied Piper of Hamelin who leads the children (Malays) to a catastrophic end; Abdullah Ahmad Badawi is like Rip van Winkle who slept when he should have been working to improve the nation; and Najib Abdul Razak appears to act like Nero who fiddled while Rome burned.

Najib’s entry into politics is a lacklustre, predictable story which might explain his inability to inspire the nation. His role in undermining Malaysian democracy is pivotal.

He places more emphasis on sound-bites and slogans, than on sound policies. Najib is English educated, and a well travelled man. Some consider him a roué but he comes from a family with an impeccable political pedigree. The reason he failed as PM is simple.

At the age of 23, Najib became a career politician, when he was elected unopposed as MP. The seat was vacated when his father, Abdul Razak Hussein died. Najib was propelled into politics during the psychedelic 70s when wine, women and song preoccupied the young men of that era.

What would these tender, youthful Malay men from the pampered classes know about the real world? Najib’s appointment was a stunt, contrived to capitalise on his father’s popularity. He lacked experience.

What practical and useful advice could Najib give the people of a nation which had been independent for barely two decades? Two years before he became an MP, rural villagers were starving, because of falling rubber prices. How would he advise these communities when he was a greenhorn himself?

In the book, ‘Awakening: The Abdullah Badawi Years in Malaysia’, Abdullah talked about reform. Despite being in agreement with him on the need for change, Najib’s inaction is probably caused by fear.

He is also hampered by his father’s reputation. It is alleged that in previous by-elections, posters of Abdul Razak were displayed, to remind the electorate that Najib is his son. Only an insecure person would trade on his father’s image to prop up his own.

What was GE13 all about, if not change? Before GE13, Najib claimed that he would accomplish all manner of things. Post-GE13, he and some of his cabinet members gave excuses that it would take another five years to tackle these same issues. If Najib felt that he was not up to the task, then he should have left the job of change to Pakatan Rakyat.

Today, Najib may have agreed with Abdullah about change, but claimed that it would take a long time. He hasn’t even started the process of change.

This writer disagrees with Najib about change taking a few generations. In a previous article, I wrote that ‘Najib could be our Super Hero’, and said that the change which Najib dreams about could be almost instant.

The first 11 steps might be those listed below. I am sure you can think of many more.

First. Detain Mahathir for treason. Remove him and put him in solitary confinement before he faces trial. Najib may be surprised to see how the nation would be solidly behind him.

Second. The chairperson and deputy chairperson of the Election Commission (EC) should also be arrested for treason. It was the collusion of the EC which allowed cheating and bribery at elections.

Third. The attorney-general, the inspector-general of police and the head of the Malaysian Anti-Corruption Commission (MACC) are to be held for crimes against the state.

Not everyone in the civil service is corrupt. Many civil servants confide that they are disgusted by the orders they have to follow. Najib should promote senior staff members who are persons of principle and known to be free of corruption.

The police, the army, the judiciary or other institutions cannot simply be disbanded as this will lead to a state of anarchy, like after the invasion of Iraq. Good people with potential to lead will soon assume control. We have enough laws. They just need to be consistently enforced.

Fourth. Make the police, judiciary and media independent. With a free press, the people may learn the truth. An independent police and the formation of the Independent Police Complaints and Misconduct Commission will improve the performance of the police. True justice might finally be dispensed.

Fifth. Detain the warlords in Umno-Baru (most are involved in money politics anyway) and immediately remove their sources of income, such as the taxi-permits which are allegedly awarded in bulk, to companies belonging to politicians and their cronies.

Without money, these people will have less opportunity to plot and scheme. Umno-Baru politicians will learn the hard way, the truth of the saying, “No money, no talk”.

Sixth: Work with Bersih and the relevant NGOs which have compiled a dossier of corrupt politicians and BN cronies. They have slogged hard for the evidence. All Najib need do is to investigate, confirm and enforce.

Seventh: Provide a period of amnesty, so illegal immigrants can save themselves from being deported, but return home voluntarily. Most GLCs are run by cronies. The money trail should lead to their agencies which benefit from cheap labour on plantations, and deprive locals of jobs.

Eighth: Reduce the Prime Minister’s Department from 45,000 people to 450. This might focus people’s minds and make them concentrate on their jobs. A special unit should be set up to recover the money, lost because of corruption and illicit outflows. This money can be returned to the treasury.

Ninth: Abolish the NEP and ensure that needy people, regardless of race, religion and ethnicity are helped. Abolish quotas for university places and award scholarships to the best Malaysian students. Why should other nations profit from our brain-drain, whilst we collect the dregs of other countries?

Tenth: Provide a grace period for politicians and their cronies to ‘sing’ about their colleagues’ crimes. The first 20 people could be given immunity from prosecution, unless murder has been committed. Perhaps a reduced sentence in the most severe of criminal acts could be considered.

Eleventh: Replace the mullahs who serve only Mahathir and Umno-Baru, with learned clerics who will foster good community relations and help the nation.

Malaysia is in a perilous state because one man, Mahathir, stands in the way of the prime minister. Mahathir wants to preserve his legacy. He claims ownership of Malaysia. He has succeeded because not even one prime minister has been courageous enough to stand up to him.

Mahathir triumphs because many Umno-Baru politicians are unwilling to admit the severity of the Mahathir problem and are afraid of the dirt that he could reveal about them.

Once Najib has initiated the few steps necessary for change, he should call for fresh elections in a year’s time.

If he knows he has been a good leader, then the electorate will vote for him.

Who knows, the rakyat might be thrilled to be liberated from Mahathir, and be willing to close one eye to his wrongdoings? Perhaps, the new independent judiciary could be lenient with him, if he is found guilty of criminal activities.

Malaysian history would take a different course if Najib were to start the process of change. Elections should not be bought by doling-out wads of cash or giving freebies. Elections should be won when voters respect a party and its convictions.-mariam mokhtar,malaysiakini