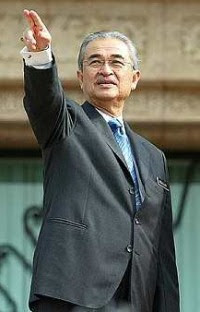 Sin Chew Daily interviews Pat Lah. This what Pat Lah got to say;

Sin Chew Daily asked the prime minister how would he rate himself over his performance for the past four years?

Abdullah was smiling when he said he cannot “mark his own exam paper” but it should be left to the people to do it. However, frankly speaking, he believed he has carried out a number of short, medium and long term planning in different areas. And some of them are going on smoothly. Therefore, he rated himself under “satisfactory”.

“I can only say in this way. I'm currently implementing promises I made since my term of office. Some promises require long period of time to be implemented while some require a specific timing. My conclusion is, I'm starting to implement my promises and some of them require some period of time to be carried out.” "Therefore, he rated himself under “satisfactory”."

“When I first took the office, I focused on improving the public delivery system and concerned about the efficiency of state government and other government departments services. When I was in Davos, New Zealand for the World Economic Forum last month, many foreign leaders personally praised that Malaysia's economic development has achieved good performance.”

“ I have implement four economic corridors by now and I'm going to implement the fifth economic corridor in Sarawak on 11 February. I've took the office for less than four years, I'm still satisfied with my performance and achievements. But for greater satisfaction, I need to work harder.”

“Everyone knows Anwar is good in double-dealing. He denounces Malays in front of Chinese and scolds Chinese in front of Malays. This is his nature.”

Anwar seems to be ambitious and intends to play a more important role. For this, Abdullah said: “ He might have the intention to show his talent in different fields and he is the best. But don't forget, Anwar says differently in front of different people. His words are inconsistent with his deeds. You can tell by just looking at his past records.”

“ Those who has a little understanding about Anwar will know his nature. Go and have a look at his past records.”

Abdullah Ahmad Badawi pointed out that racial issues are endless in a multi-ethnic country.

“I don't think there is a great resistance. The problem is many people still like to stir up racial issues. This is the most difficult problem we are facing,” The Prime Minister said the biggest resistance he faces in efforts to promote racial unity.

Abdullah said: “The increasing oil prices will certainly affect Malaysia. Following that, it is impossible for Malaysia to escape from the global turbulences. He added that the United States economy will surely affect the Malaysian economy. The difference is to what extent the impact would be. It is also his great concern. In addition, the local ethnic issue is also an issue the country leader must carefully deal with and be concerned of. 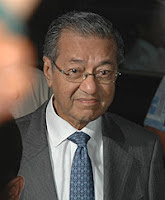 “I have never been affected by his remarks. It doesn't distress me. It has never interfered with my work, and I will still continue to work to ensure that each project is successful.”

However, he was unwilling to respond to any criticism by Mahathir.

He made the gesture of “switch off the radio” and continue to work under quiet environment.

He has instructed all concerned departments to be fair and to deal with the issue in accordance with the law. As for the temple, he had also stated clearly in the Cabinet meeting that the Chinese religious issue will be handled by the Malaysian Chinese Association (MCA) leaders. Meanwhile, the Indian religious issue will be handled by the Malaysian Indian Congress (MIC) leaders. Even though the central government has formulated policies, some state governments are still not sensitive towards local issues. Abdullah promised that “any sensitive issues will be settled through Barisan Nasional (BN) as we are going to cooperate with the state government”. 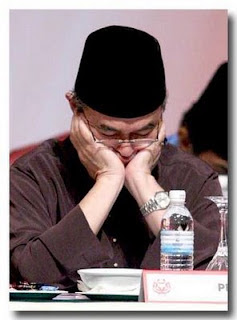 On Member Parties Of BN Coalition Support Each Other....

“Umno is willing to give support if MCA and Gerakan face any problem. Similarly, if Umno faces any problem, MCA will give a helping hand too. This is the essence of BN, you can see its members parties are supporting each other.”

Asked about BN's Chinese-based parties candidates were ridiculed that they dare only to contest in Malay constituencies, Abdullah said: “ the truth is BN fights in every constituency within the country. Since it is an elections, it is seldom possible to win hands down. Therefore, this is a very stupid argument.”

(Only stupid UMNO diehards clamours about this.)

On The Opposition’s Accusations Are Baseless....

Referring to the accusations of Democratic Action Party (DAP) which claimed that voting for Malaysian Chinese Association (MCA) and Parti Gerakan Rakyat Malaysia (Gerakan) means supporting Umno to implement unreasonable and bias policy, the prime minister said: “Do not make any statement that thinks MCA, Gerakan, Malaysian Indian Congress (MIC) and even Umno are bodoh (idiots), and pointed that they have no fighting spirit, dare not to voice out and do not help to improve the status of the various ethnic groups. These are policies to raise racial sentiments to fish votes and support.

When being asked to comment on the accusation that said MCA and Gerakan dare not to voice out their views even on unfair policies, Abdullah said it is an insult to them. “The Cabinet is not a one voice hall. They are not 'yes men' either! It is unfair for the opposition party to claim that they are useless, have no fighting spirit and not serving the people.”

(Only when Hishamuddin brandish his keris kontot,as the UMNO goons dance to the tune of tarian kuda kupang, the MCA & Gerakan will start their koontow moves.)

Cleaning up corruption is not a simple work. People like to hear sensational news about the punishment of the corrupt.“The problem is that Malaysians would like to see someone taking the rap for such corrupt practices. The people like to read in the news that anti-corruption officials are doing something.”

He explained some investigations into corruption cases have yet to be completed. The media should not report on the story before these cases are brought to court because it would embarrass the people under investigations. "I have become Prime Minister for less than four years and the anti-corruption work has restored the public confidence. We strengthen the ACA and increase its manpower. We bring the offenders to court according to the complaints we received.”

(If you only go after the ikan bilis while the big jerung like Rafidah,Ali Rustam, Adnan Mansor,Shahidan Kassim,etc, etc, are promoted and kept within reach, obviously corruption cleaning will never work in bolehland,Pat Lah!)

On The Chinese Apprehension.....

He agreed that under the government's affirmative action policy, Malays have been more confident than before. At the same time, he also feels that the Chinese are increasingly insecure in participating in the national development opportunities. 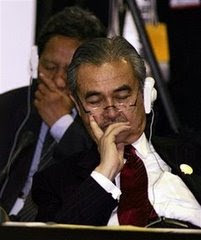 Abdullah said that what he wants to do is to pay attention to and respect the principle of equity and fair distribution in the implementation of the re-organisation of the community.As for the problem of the lack of security among the non-Malays, Abdullah thinks that he must first explain the reason the government implements this affirmative action policy. Abdullah also stressed that since the NEP had ceased to exist, then we can only continue the spirit of equitable distribution of national wealth on the national development policies to assure the country balance development. No ethnic group will be left out.

(Then explain why Hindraf is going on a warpath with your adopted brother Samy Vellu?)

This sleepy head PM must be half asleep,while doing his interview with the daily. The replies were standard and there were nothing new that Pat Lah could divulged. What more can we expect from this guy.......... Lets throw his gomen out.....

Hi Nice Blog. Shout to the world that you are quitting. For those who are dare to quit enough to quit their bad habits like smoking, drinks, drugs etc.. We guaranteed Money back if you are failed.