The RCI is adamant of their refusal to allow Anwar on the witness stand...

The Royal Commission of Inquiry(RCI) setup on behest of Pak Lah to investigate the Lingam video clip is facing a credibility crisis after sitting for more than three weeks and with more than a dozen of witnesses being called to testify.

The very first day of the RCI’s sitting, Anwar had similarly applied for Haidar to disqualify himself on grounds of potential conflicts of interest. Anwar had said that Haidar was a trustee at the Perdana Leadership Foundation which is headed by ex-premier Mahathir Mohamad and Vincent Tan; whose name was mentioned several times in the video clip, is also a trustee in the same foundation were witnesses at the inquiry.

On Tuesday's sitting the RCI panel members barred Anwar from participating in the proceedings. Their decision was based on Anwar's refusal to appologise for his remark which the RCI deems it to be contemptuous. 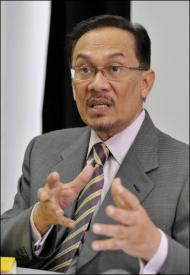 Earlier Anwar,thru his lawyer Karpal Singh has asked Haidar to recuse himself from the proceedings despite a revelation that he was a relative to a Ahmad Fairuz, a key witness in this inquiry.

Karpal: This could have been disclosed by the chairperson at the outset of the inquiry. It’s unethical for a judge not to disclose his relationship with an important witness. If you could confirm the facts...

Haidar: Yes, the facts are correct but their relationship ended 30 years ago.

Karpal: That makes no difference... the fact that there is a relationship.

Haidar: That relationship terminated 30 years ago. Where are the authorities (to support the application)? As Karpal read out a few cases to support his argument, he pressed on to question Haidar.

Karpal: I wish to know why you didn’t disclose at the beginning. The public has the right to know. I am sure Mr Chairperson knows these case laws well...

Haidar: I am not aware of all the case laws.

Karpal: Why you didn’t disclose? 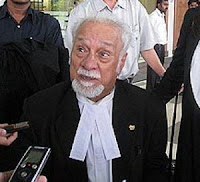 Haidar: I will hear your submission first.

Karpal: It was unethical...

Haidar: Let me look at it (the authorities).

Karpal, then went on to cite few other case laws to support his argument that Haidar and Fairuz’s relationship was “sufficient to show real danger of a likelihood of bias”. He also rebutted Haidar who said the relationship ended 30 years ago. “You share a common niece, how can you say that it’s been terminated, how could it be? It can’t be,” said Karpal.

An interesting fact about the RCI is that four of its panel members somehow or other were involved directly or indirectly in Anwar's previous trial that saw Anwar being incarcerated.

The Lingam inquiry revealed that the former CJ Mohd Dzaiddin was angry with Eusoff Chin for not recommending him the "tunship". In order to makeup with this frustration,the other way the "tunship" could be awarded was to please Mahathir; he with Steve Shim and Haidar simply did that by turning down Anwar's appeal in July 2003.

Haidar and Steve Shim are the current RCI panel members. It must be very embarrassing to face Anwar at this point of time. So are they trying to find alibis so that they wont come face to face with Anwar? or are they worried that Anwar gonna to spill more shits about their role in the so called conspiracy designed by their grandmaster, Mahathir?

Lets vote the BN gomen out.

good morning ppl. I'm actually into shoes and I was looking as far as something that singular make. The prices due to the fact that the sneakers were approximately 200 bucks on every page. But finally I set this site selling them for the benefit of half price. I exceptionally like those [url=http://www.shoesempire.com]prada sneakers[/url]. I will definetly order these. what do you think?