Khairy, the next MP for Putrajaya & Education Minister..... 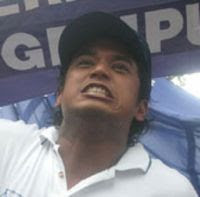 Rumours has it that Pat Lah's son-in-law,Khairy a.k.a Kera Jalanan want to contest the Rembau state seat and if he wins he will be the next Menteri Besar of Negeri Sembilan. But,he faces stiff opposition from certain UMNO groups in Negeri Sembilan.

Another source says that,Pat Lah's son-in-law Khairy a.k.a Kera Jalanan is also keen in vying the Putrajaya Parliament seat and if he win, he will be appointed the Education Minister. As Education Minister, he is set to be the next UMNO Youth leader, replacing Hishamuddin Tun Hussein, who is tipped to be the new Johore's Menteri Besar. The incumbent Putrajaya ex-MP Adnan Mansor is now embroiled in the Lingam video clip episode, is most likely to be drop.

It seems that this Kera Jalanan is so keen to be the next Minister of Education coz the Ministry is a huge gold mine,waiting to be exploited, where he gonna drain billions into his account. You guys out there are forewarned, please dont blame us for the mishaps later. So dont waste your votes by voting BN.

Must we just to wait and see....lets do something before he ruins the teaching profession and sells the Education Ministry to some unknown mee seller from Singapore.

(gonna take an election break,will be back soon)
Posted by ali allah ditta at 6:30:00 PM

Sorry if this comes as an intrusion but there is an effort to get as many bloggers as possible to blog about bloggers whom are running for public offices on one particular day. One blogger candidate per day.