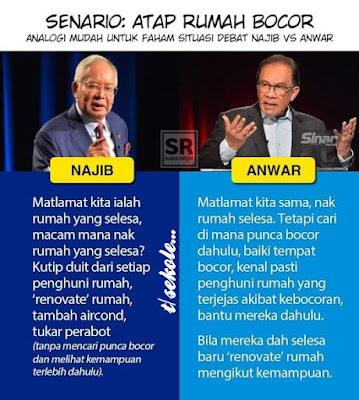 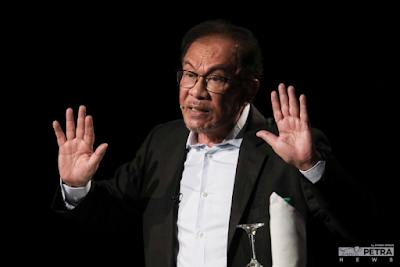 Win or lose? Immaterial...
Describing open live debates as a hallmark of a modern democracy, opposition leader Datuk Seri Anwar Ibrahim said it is an “opportunity for leaders to lay out issues and suggestions to allow the people to decide who has better solutions”.
He told The Vibes that future debates should not come with conditions or off-limit subjects as last night’s clash with former prime minister Datuk Seri Najib Razak saw “taboo” subjects such as the 1Malaysia Development Bhd scandal and other ongoing court cases.
“If we did not agree to those conditions, the debate would not have taken place. Which was why I had to agree, otherwise the debate would not have happened. “For meaningful debates to take place in the future, such conditions should be done away with.”
Still, Anwar said debates are “not about who was the better debater or who won the night but one that laid out issues plaguing the country for a long time”.
“The debate and discourse should continue among the people as they are more aware of some of the issues and can come up with suggestions for solutions of their own. After all, healthy discussions should be encouraged for a more informed and proactive society.”
However, he said he was disappointed that last night’s debate was not held at Universiti Malaya. “I am disappointed that Universiti Malaya, my alma mater, did not think it suitable to have the debate there. UM used to lead as an institution for open discourse and gatherings, from the speaker’s corner to student activism.
“Nevertheless, I hope this is not the last time political leaders are given a platform to debate each other on issues that concern the rakyat.” Previously, student activist Fahmi Zainol alleged that the student union faced roadblocks in its attempt to host the debate. 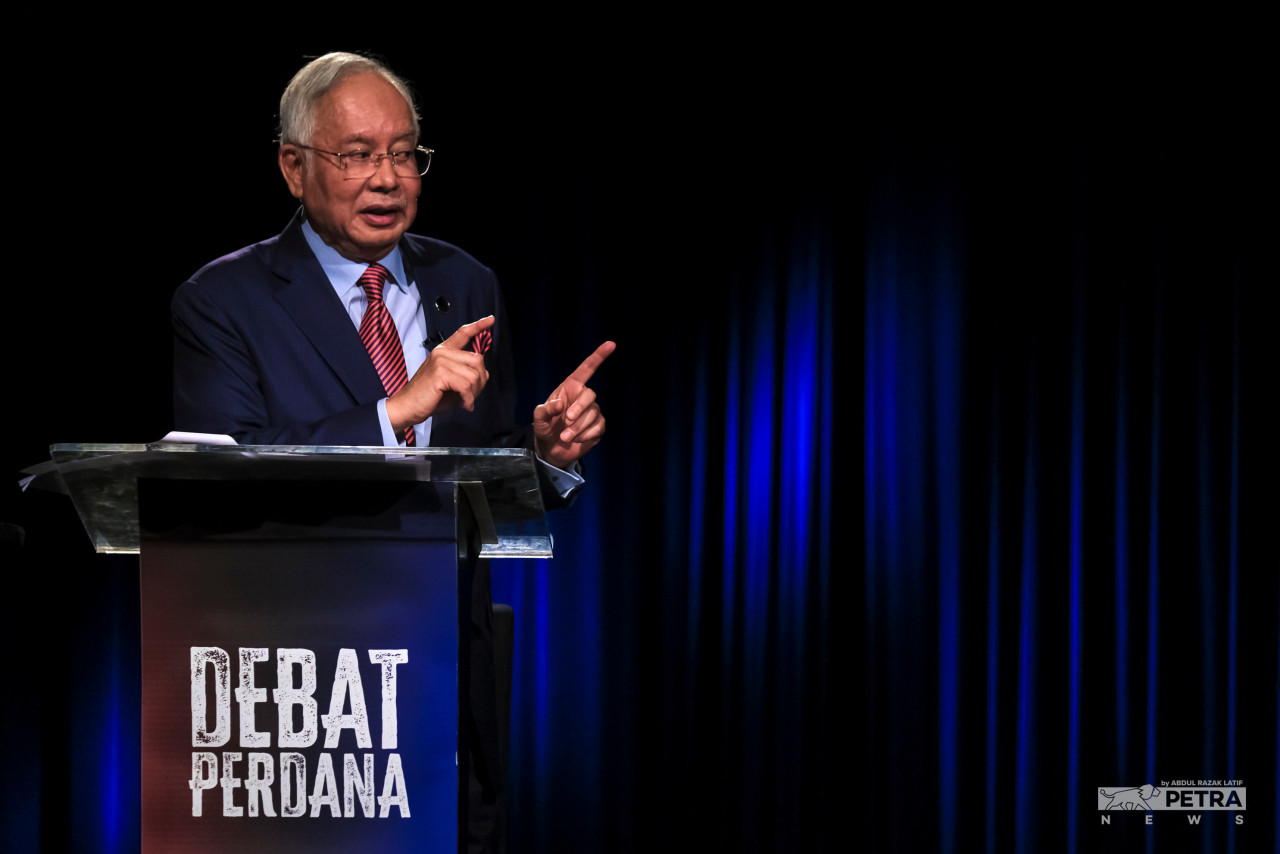 Meanwhile, Najib shared that he did not have a good night’s sleep for a week leading up to last night’s debate, but did his best and saw it as a victory for Umno.
After the clash with Anwar ended, he was speaking to more than 300 supporters who were part of a viewing party at the Umno headquarters here after being greeted with chants of “Hidup Bossku”.
“I have tried my best as I represent Umno. We are on the right track and our ideas are more thoughtful than the other side. We have the right philosophy for the people.” He also took a swipe at Anwar over repeated comments on “forensic audits”, saying it was not a great idea to champion “forensic” while Najib champions the people.
For the most part of the 90-minute event, Anwar highlighted root causes and the need for transparency and more accountability while Najib attempted to table solutions to the country’s economic woes.
And although the troubled oil and gas company Sapura Energy took centre stage in the first segment of the debate, much of the debate was on the country’s post-Covid-19 recovery, good governance, and nation-building.
Among the highlights of the occasion was Anwar shooting down Najib’s proposal for national oil company Petronas to buy over Sapura Energy, instead insisting on forensic audits and greater scrutiny of the financially distressed firm. - the Vibes 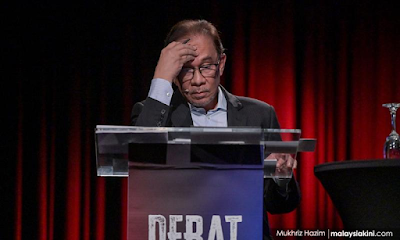 What is Anwar's game?...
What was opposition leader Anwar Ibrahim thinking of when he agreed to take part in the debate with the convicted felon, former prime minister Najib Abdul Razak?
Najib is setting the stage for a political comeback, but what is Anwar's plan? He was foolish to give political legitimacy to the world's greatest kleptocrat. Najib has been investigated, charged and sentenced for his role in the 1MDB scandal. Najib belongs in Sungai Buloh, whilst Anwar should step down.
If Anwar was desperate for a sparring partner in debates, that person should have been Prime Minister Ismail Sabri Yaakob.
Ismail Sabri controls the nation's purse strings. He instructs his Finance Minister Tengku Zafrul Abdul Aziz and money is made available. Ismail Sabri is the decision-maker, not Najib. Or are people speculating that Najib is the puppet master, and is the one controlling Ismail Sabri's strings?
Most of us disapproved of the Anwar-Najib debate, which was first mooted in early April when PKR's vice-president Rafizi Ramli invited Najib to debate the Sapura Energy bail-out. 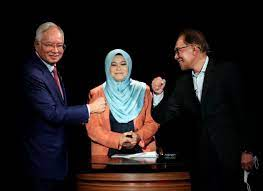 Desperate to rebuild reputation
Najib dangled the carrot and told Rafizi he would take part in the debate only if Anwar joined too. Najib is desperate to rebuild his reputation, which lies in tatters after his conviction in the SRC International scandal. He is eager to influence public opinion. He pops up at election hustings, schools, buka puasa events and recently, the palace. He does not care that he brings down the reputation of those whom he meets.
This debate was a distraction. Will Malaysians realise that this is not a popularity contest? This is not a game show where there are winners and losers. There are real issues at stake and in this debate, what each person said, or suggests, about saving Sapura, or the downtrodden rakyat, means very little, especially as the one who calls the shots is now in Washington, trying to communicate with the American president, Joe Biden.
How did this debate change the life of Makcik Kiah, or the poor pakcik who is struggling to make ends meet?
Najib is addicted to fame. He believes every word that is generated by his own publicity machine. He is a master manipulator and he had a good mentor - former prime minister Dr Mahathir Mohamad. Anwar was wrong to give Najib extra publicity. Is he oblivious to Najib's cunning? Anwar accepted Najib's bait instead of giving him the cold shoulder.
No one can advise Anwar, as he only listens to his own counsel. After the debate, Najib will continue to have a dig at Anwar, and with his social media presence, has the potential to do Anwar lasting damage. It has already started.
When Najib met his supporters at the Putra World Trade Centre, he had already fashioned himself as the "people's champion", as opposed to Anwar, the "forensic champion". Najib, the self-styled "people's champion", is still focused on playing the race card. He wants Malaysians to think that it is his destiny to "save" the Malays. 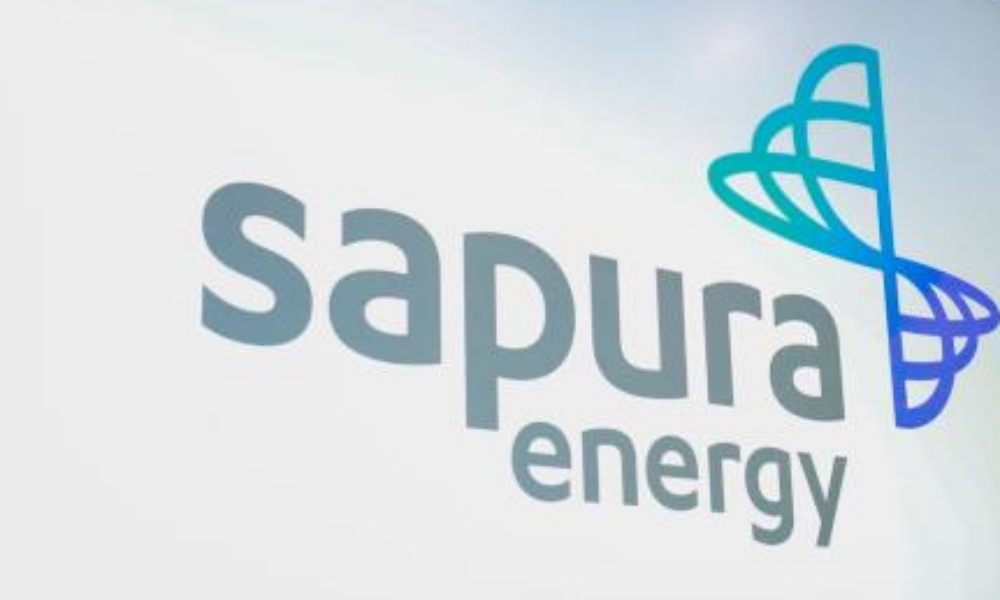 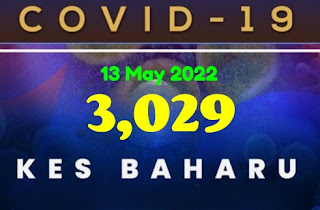