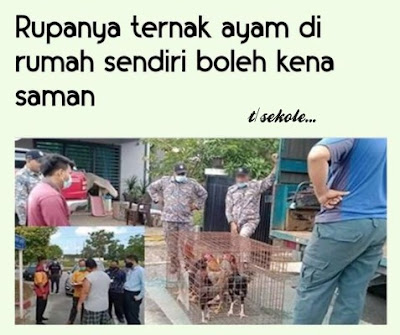 Majlis Pɛrbandaran Kuantan (MPK) mɛnyerbu sebuah rumah di Kuantan,
Pahang selepas didapati mɛnternak ayam di kawasan pɛrumahan. - minah kerang
DAP MP Ramkarpal Singh has alleged that the Malaysia Anti-Corruption Commission's (MACC) image was tarnished by 2016 leaked audio pf former prime minister Datuk Seri Najib Razak over the 1MDB scandal.
Ramkarpal's stand differs from former Chief Justice Raus Shariff who had said recently MACC seemed to have enjoyed public confidence before the appointment of "active politicians" in the institution.
The Bukit Gelugor MP added : "as a former CJ, Raus ought to have been candid about the image of the MACC which took a beating when leaked audio recordings of a former prime minister and a would be MACC official in 2016 were made public by former MACC chief Latheefa Koya in 2020 in the presence of current MACC chief Azam Baki.
“Whether or not the said recordings are true, they are certainly damning and ought to have been addressed by Raus, particularly when Azam himself was at the press conference where the recordings were exposed.
"Was Azam’s presence an indication that he believed the said recordings were indeed authentic?,” Ramkarpal said.
This, he said, Raus failed to address the elephant in the room after the recent controversy surrounding Azam's share trade issue which has attracted criticism from the public, leading to a serious confidence deficit of the institution.
“One would have thought such incidents would have been addressed or at least commented on by a former CJ while speaking at the Malaysia Anti-Corruption Forum 2022," Ramkarpal said. 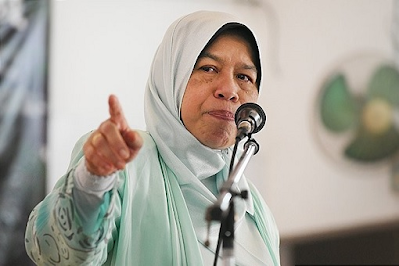 Zuraida abandons Muhyiddin’s sinking ship,
to be followed by Azmin’s 11 traitors...
Zuraida Kamaruddin, arguably the most hated woman politician since 2020, has finally quit Bersatu (Malaysian United Indigenous Party) and resigned as Plantation Industries and Commodities Minister. She was clever enough to announce her resignation while on an official trip to Turkey, taking advantage of the trip to holiday until June 2 at the expense of taxpayers’ money.
She was one of 11 MP traitors, led by Azmin Ali, who quit their former party PKR (People’s Justice Party) during the infamous “Sheraton Move” in February 2020, leading to the collapse of the democratically-elected Pakatan Harapan coalition government. A rising star, both Azmin and Zuraida were PKR’s deputy president and vice-president respectively before their defections.
After months of rumours, Zuraida has finally confirmed that she is joining Parti Bangsa Malaysia (PBM), a new political party formed “secretly” by herself together with Azmin as a backup plan. The new party is currently being led by Sarawak MP Larry Sng, another PKR traitor. After her resignation, she said her support for PM Ismail Sabri will continue.
She said – “Over the last few months I have started to think about national politics and the direction of my political future. I see a lot of potential in PBM, especially at a time when Malaysians are tired of the old politics, which stifle the progress of the country. I believe in the struggles of this party and am very attracted with its core principles of multiracial engagement …”
Of course, she was talking cock. If she really believes in a multiracial society, she would not have left PKR, a multiracial party, and joined a racist party called Bersatu in the first place. After all, Bersatu president Muhyiddin had declared as early as 2010 that he is “Malay first”, and “Malaysian second”. There’s only one reason why she quits Bersatu – the ship is sinking and rats are fleeing.
Already, Finance Minister Tengku Zafrul is actively scouting for a safe seat to contest in the next 15th General Election under the UMNO banner, despite the fact that he was first appointed to the powerful portfolio by Muhyiddin. Instead of being loyal to the former premier, the ungrateful Zafrul too appears to have abandoned Mahiaddin alias Muhyiddin. 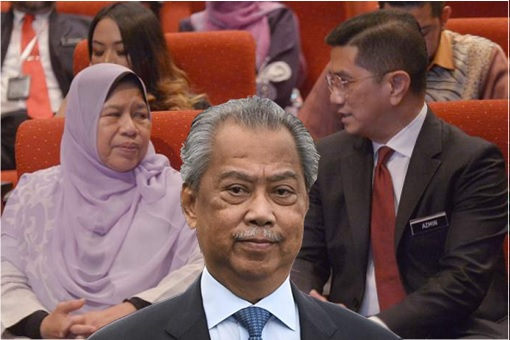 Traitors - Azmin Ali, Zuraida Kamaruddin, Muhyiddin Yassin
While Zuraida is reaping what she sow for being a traitor, Muhyiddin gets to taste his own medicine as his party – even the Perikatan Nasional coalition he is leading – started to crumble. There’s no loyalty amongst thieves, let alone traitors. After Zuraida betrayed PKR and joined Bersatu, it’s only natural that she now leaves Bersatu to join another party, PBM.
However, the decision to quit at this hour means not only Bersatu is game-over, it also shows Zuraida is extremely desperate to find a temporary shelter, before she jumps again. Make no mistake – the newly formed Parti Bangsa Malaysia (PBM) will be slaughtered like a pig in the coming national election. That’s why she is sucking up to PM Sabri, hoping to become UMNO’s ally.
Zuraida isn’t alone in quitting Bersatu. Azmin and his band of former PKR defectors are expected to follow suit. After the humiliating defeat in the recent Melaka and Johor state elections, Bersatu realizes it badly needs non-Malay votes. That explains why Muhyiddin shamelessly invites Pakatan Harapan to work together again; the same reason Zuraida suddenly claims how impressed she is with PBM’s principles of multiracial.
Both Azmin and Zuraida had overlooked one huge problem when they hastily jumped ship in 2020 – the inevitable infighting within Bersatu as well as Perikatan Nasional coalition. The fact that Azmin and his band of 10 PKR defectors did not join Muhyiddin’s party until August 2020, some 5 months later, suggests that they had jumped ship without consideration for a long-term political survival.
Zuraida, who was the Minister of Housing and Local Government under the previous Mahathir administration, had been given the same portfolio under Muhyiddin regime – until her demotion to the Ministry of Plantation Industries and Commodities under the current unelected Ismail Sabri administration. At the end, Zuraida did not gain much despite her betrayal.
On paper, Azmin appeared to be the de-facto deputy prime minister during Muhyiddin regime. In truth, however, Muhyiddin did not fully trust his lieutenant. As a traitor himself, Muhyiddin knew Azmin could backstab and betray him one day. Home Minister Hamzah Zainudin was therefore positioned to check and balance Azmin’s power and influence in Bersatu. Bersatu PPBM
In fact, Azmin and loyalist Zuraida had no official ranks in Muhyiddin’s party. Both were considered outsiders, and were “appointed” as supreme council members by the Bersatu president in Sept 2020. From being the favourite boy of Mahathir to second-in-command under Muhyiddin, poor Azmin is now nothing but a low ranking senior minister in the government of Ismail Sabri.
Once drunk with power, Azmin developed bad blood with not only Hamzah, but also Ismail. The infighting inside the so-called “Malay-Muslim” government saw an UMNO rebellious faction led by Najib Razak and Zahid Hamidi launched a coup to overthrow PM Muhyiddin. On August 2021, Muhyiddin government collapsed after it lost the confidence of the majority of lawmakers in parliament.
Indeed, karma is a bitch. Azmin and Zuraida had never imagined the Perikatan Nasional backdoor government would collapse in just 17 months, shorter than Mahathir’s 22-month administration. Muhyiddin’s lost of power came with a price – disintegration of Bersatu. In February this year, a majority of Bersatu’s supreme council members agreed to sack Zuraida due to her link with Parti Bangsa Malaysia (PBM).
The split in Bersatu has just begun publicly now, largely because the party had wanted Zuraida to quit and be seen as a serial party hopper, while Zuraida wanted to be sacked so that she could cry of being victimized. Even though Bersatu refused to boot her for tactical reason, the party managed to humiliate Zuraida by kicking her out of its supreme council members’ WhatApp group.
Zuraida, and Azmin for that matter, had never been loyal to Bersatu from the beginning. They have been using government resources to build their own power-base, recruiting large members into PBM through Penggerak Komuniti Negara, an association led by Zuraida’s known associates. On the same day she resigned from Bersatu, the party immediately stripped her of the Supreme Council post.
The result of the Johor state election in March 2022 – Bersatu won only 2 out of 33 seats contested – was enough to convince Zuraida that there is no more future with the party. She has also decided to quit after learning that Muhyiddin had two weeks ago agreed to replace her with another Bersatu leader in the Supreme Council, which will be seen as yet another round of humiliation. Crucially, with lame duck PM Sabri under pressure from his own party to dissolve the parliament and call for a snap election anytime now, Muhyiddin will unlikely field Zuraida as a candidate even if she continues to squad and rot in the party. By being friendly to UMNO through PBM, she hopes to get at least some crumbs – a few seats to contest for the new party.
She also hopes that PBM could give her a new jumpstart as a clean party, unlike Bersatu which is tainted with treachery, backdoor leadership, incompetence and power-crazy leaders. As UMNO and Bersatu rivalry escalates, despite both parties sharing power in the federal government, Zuraida wishes to stay neutral and does not want to be associated with the loser – Bersatu.
But who can blame her latest defection when even despicable Hamzah has been seen to be warming up to some UMNO top leaders, sparking speculation that the former UMNO man who had jumped ship to Bersatu after UMNO lost in the 2018 General Election might return to his former party. Still, as too many Malay leaders compete for limited Malay seats, PBM and Zuraida may be in trouble.
PBM now has 3 MPs, including Zuraida, and 5 assemblymen – all are defectors. If Azmin cartel were to defect to PBM, the party will have at least 13 MPs, leaving Bersatu with 21 MPs. PBM can certainly demand some concessions if Ismail Sabri plans to prolong his stay in power while waiting for the result of corruption trial involving UMNO president Zahid Hamidi.
Zuraida’s departure could open the floodgate for more Bersatu MPs to jump ship even if Azmin, for strategic reasons, decides to stay till the eleventh hour before joining PBM. With Bersatu being weakened and PBM emerges as a substantial political player, Azmin would be watching the reactions from PM Ismail Sabri and ex-PM Muhyiddin Yassin.
Either way, it’s hard to see how Azmin and Zuraida will be re-elected again. The 11 PKR defectors were originally elected under Pakatan Harapan (or rather PKR) banner. The people still remember their disgraceful betrayal and have been waiting patiently since March 2020 to teach the traitors a lesson. In the same breath, Muhyiddin’s party could finally disintegrate due to party hopping. - FT