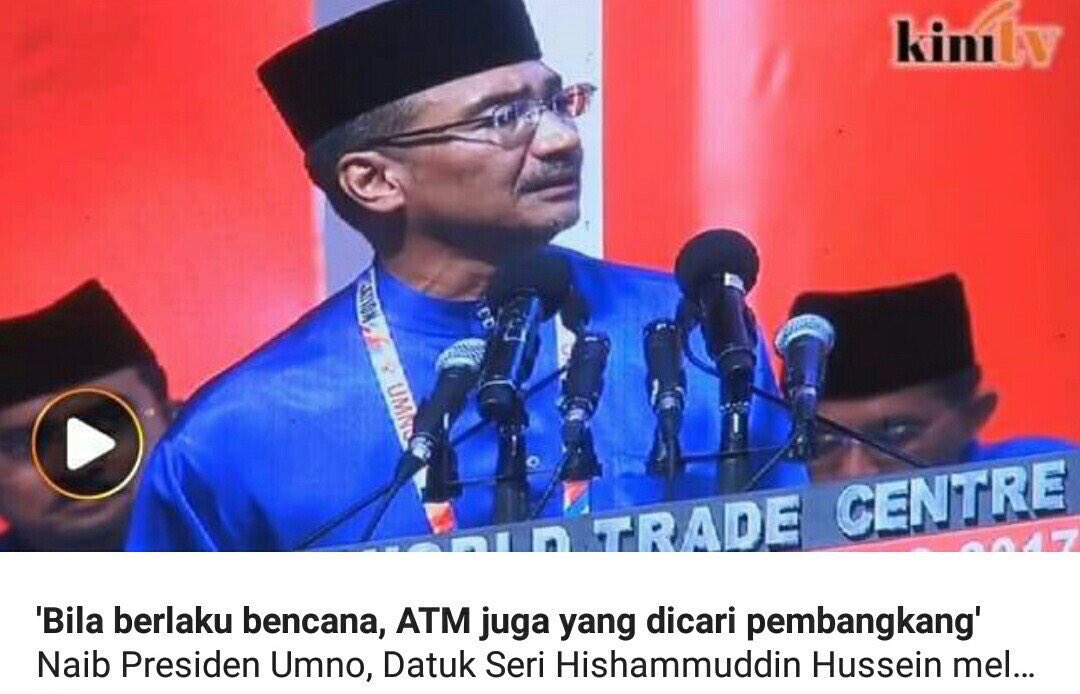 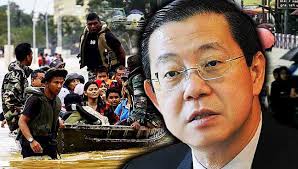 And so another instalment of the annual carnival we all know as the Umno General Assembly has concluded, and the rest of the world can get on with their lives.

The red baju Melayu and white and red baju kurung have been sent to the dry cleaners and put away for the following year; speeches, like the ones from the previous general assembly, have been archived to be pulled out and rehashed for the next segment and everyone goes home with a renewed buoyancy that the 71-year-old party will rule for another 71 years ― or in the words of the president 1,000 years ― depending on how cynical or optimistic you are.

Corporate figures can now go back to the business of running their companies. Many are expected to show up as a sign of solidarity with the party and some of its beleaguered leaders.

Many turn up, looking disinterested but acknowledging it is a cross to bear for the future of their companies if they hope to secure government projects.

But their discomfort cannot be compared to that felt by the many non-Malays, including politicians and party leaders from the component parties who are herded into the lion’s den for the main event, where in subtle and not so subtle terms, they are reminded of the status quo.

“I am thankful for small mercies, I only have to listen to the presidential speech which is usually void of any racial rhetoric,” said an MCA leader.

“But some of our other members attend to listen to the delegates’ speeches and it can be very uncomfortable.”

I can relate to what he is saying. Having attended several assemblies, I can vouch that it is one of the few times that I am aware of ― or made aware of ― my ethnicity. 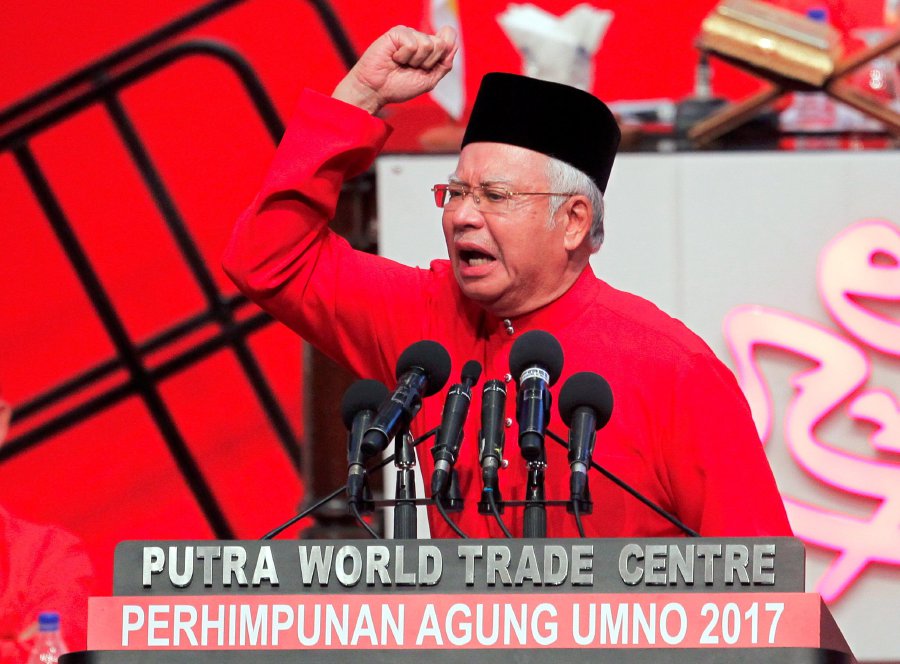 But having the benefit of access to party leaders, I also believe that the theme of segregation and divisive words unbecoming of a party that leads a multi-ethnic country are mere rhetoric... part of a tried and tested formula of longevity: keep the Malays angry and the Chinese scared.

“Bro, all these are just politics ya,” said one party leader with a tap on my back, after I sat through the racist rants of a delegate.

Such narratives may have worked, from the birth of Umno as a driving force to gain independence, to a party that under Tun Abdul Razak sought to unite the nation through affirmative action policies following the 1969 racial clashes, and under Tun Dr Mahathir Mohamad rising to become an economic tiger in the region.

But today that rhetoric would just end up confusing party members following the rolling out of the red carpet to mainland China.

Hence why the tone at this year’s assembly was less chauvinistic and focused more on uniting members themselves.

Observers will tell you that Umno needs to fight for every vote now in the coming general election as the incumbent president faces an unprecedented onslaught from his previous mentor ― the longest-serving party president.

The lukewarm response to anti- Mahathir speeches must have been unnerving. 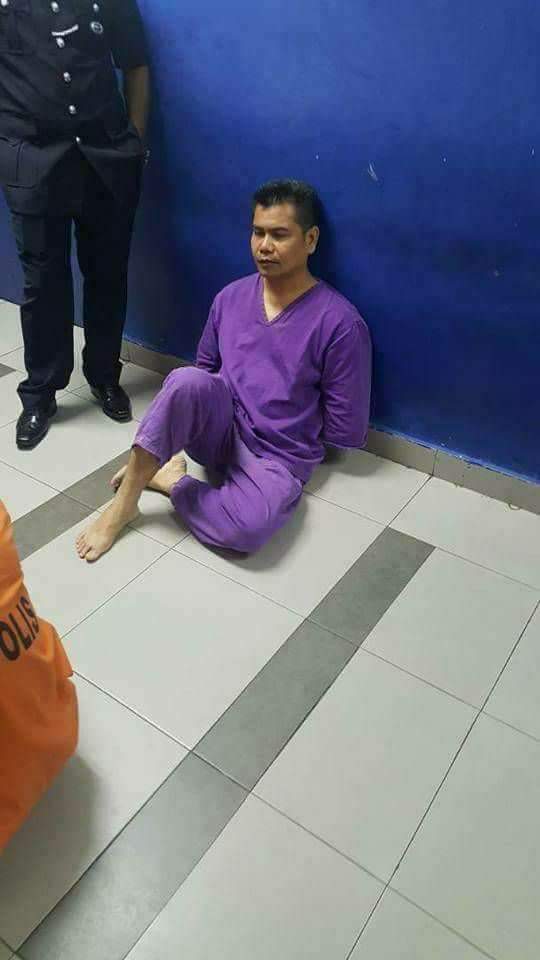 The use of royals and religion is synonymous with the narrative that the party is the champion of both institutions ― although it was this very party that saw the curtailment of the powers of the rulers; and it is under this party too that we have seen a more conservative, if not extreme, interpretation of the official religion.

This has been translated into policies and actions of civil servants that are downright discriminatory of minorities.

On a lighter note, the use of side shows like Jamal Yunos (pix,above) and carnival attractions like Azwan Ali,(pixbelow) brother of the Selangor mentri besar may seem like a desperate attempt at distracting from the real issues at hand ― bread and butter; or in a local sense nasi dan lauk.

Which is why an interesting contrast is how Umno has a better chance at winning back Kelantan than regaining states like Selangor.

The dissipation of voters who had put PAS in power in 1990; the demise of Tok Guru Nik Aziz, a man who could even draw non-Muslim support and most importantly the lack of economic activities in the last 27 years have improved Umno’s chances there.

The economic migration of Kelantanese youths to the west coast is an illustration that despite their faults, Umno and BN are better at creating jobs and wealth compared to PAS.

The irony is though, in the west coast you have more Malays including professionals such as accountants, engineers and lecturers driving Uber and Grab, holding down two jobs and receiving welfare i.e. BRIM. 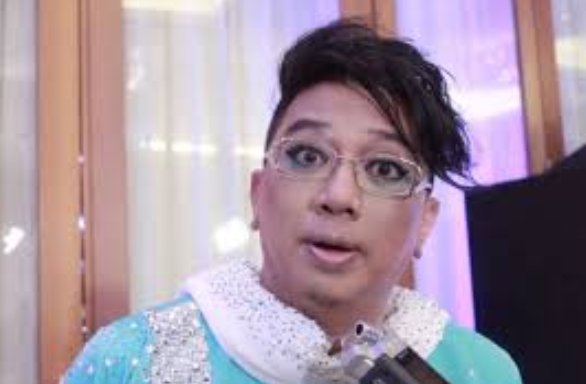 These and the fact that we need more low cost housing and affordable homes is a stark reality check on the creation of a high-income nation.

These on-the-ground realities beg the question: who exactly are these high incomes created for and how come after 70 years there have been little or no rewrite to the script of the Malays needing protection and opportunities that only Umno can provide?

One is certain that even the party leaders are unable or unwilling to answer this.

What else can you say when the Domestic Trade and Co-operatives Minister invokes God to explain the rising cost of living? It shows exasperation and lack of imagination in providing the people’s basic needs.

History has taught us that hunger and desperation have always been the root cause of the end of regimes. Race and religion becomes secondary when you cannot afford baby formula.

And if Umno does not rewrite its tried and tired script it will be a matter of time before the fact that it has already lost the plot becomes more obvious to those who are currently too busy making ends meet to notice.- Terence Fernandez,malaymail 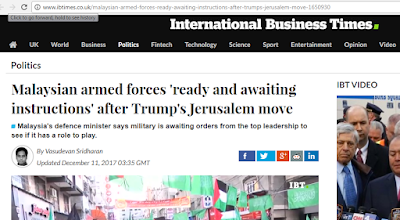 Here is a comment about this thing sent  by a former Cabinet Minister:

I read your blog on Hisham's silly threat to send our troop to Jerusalam.  Can't expect much from a slow learner addressing other slow learners. ln boleh-land,  Umno assembly can declare war against another country. Did he consult the military before declaring the war? Cant expect anything from an empty head.

He was bluffing the Umno delegates. MOl said M'sia-US ties not affected by Jerusalem issue. See how hypocrites talk.  No wonder Allah warn us against the hypocrites and hates them.

MOl said if opposition wins then  Mara, TH and other agencies will be gone. Sultan Selangor said Rulers and Constitution will protect Malays. We know who is lying.

Selangor and Penang are under opposition and Malays there are doing fine. Only slow learners from Umno are complaining. And their "onion friends" from Kelantan support what MOl is saying. And  we all know how Kelantan Malays are suffering. Hadi and MOl deserve each other.

Sorry - on Jerusalem, if Umno and govt are serious then they should ask OlC to hold emergency meeting.  Erdogan of Turkey is now chairman of OlC and has said Jerusalem is a "red line".

And after Trump announcement  he said  "Hey Trump! What do you want to do?" What kind of approach is this? Political leaders do not stir things up if they seek to make peace.

And what about our Bugis warrior ??  Bugis Warrior  should call for OIC emergency meeting and move a resolution that...
- all members of OlC recall their ambassadors from Washington
- immediately stop all investments in America
- from now only trade with fellow OlC members, Europe, Africa, Latin America, Asia Canada, Australia and New Zealand.

Firstly what is an "onion friend" from Kelantan?

Indeed MO1 has declared Donald Trump his golfing buddy. So nothing is going to happen about Donald Trump moving the US Embassy to Jerusalem. Just hot air to fool the kampong Malays in UMNO.

The UMNO General Assembly has declared war on Israel. Shouldnt it be a Cabinet decision before we can send our soldiers off to fight any wars anywhere. How does a political party have the power to declare war on another country?

We have created unnecessarily bad publicity for ourselves again. Folks, this final part is only for those of you who can think seriously. Lets focus on the real issue here...

Was there really a magical, four legged, winged animal that could fly into the sky?

Did this magical, four legged, winged animal really make a pit stop in that contested city?

Hence making that contested city a "holy" spot on earth?

There is absolutely no evidence that there was a magical, four legged, winged animal that could fly into the sky.

Magical, four legged, winged animals that could fly into the sky were first mentioned in Hindu mythology. Later the idea spread to the Persians and the Greek "Pegassus".  The Hindus called such an animal a 'khamdenu'.  Here are some pictures:

1. The Hindu khamdenu -   a magical, four legged, winged animal that could fly.  The Hindus have stories about the khamdenu that go back more than 3000 years. 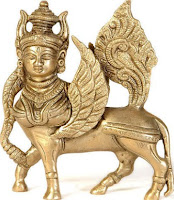 The khamdenu - the earliest known
'four legged flying animal story' -  from before 3000 years ago. 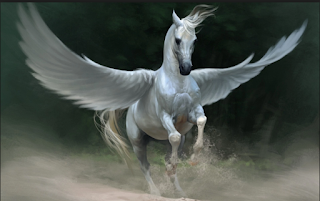 The Greek Pegasus is a mythical winged divine stallion that could fly, and one of the most recognised creatures in Greek mythology.   First Mentioned: 750-650 BC.   Mythological Origin: Greece

The Greek version appeared much later than the Hindu khamdenu. Obviously the Greeks were "inspired" by India ??

So folks, if this magical, four legged, winged animal did not exist in history, then what are you fighting over?

This is only for those of you who can think.

If you cannot think, then go and sit under a tree and chew on something.  I really cannot help you. - ostb 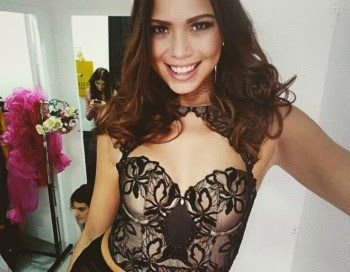 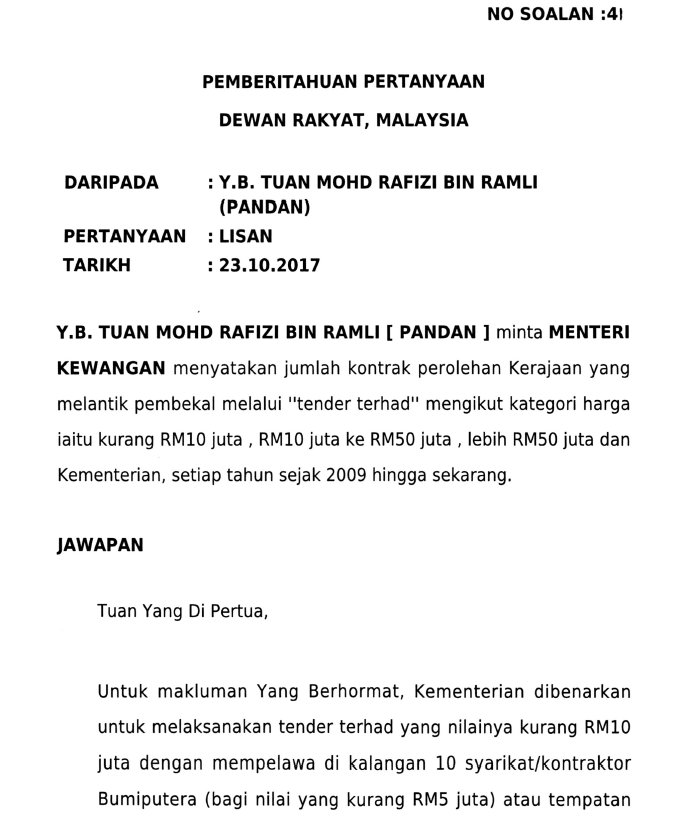 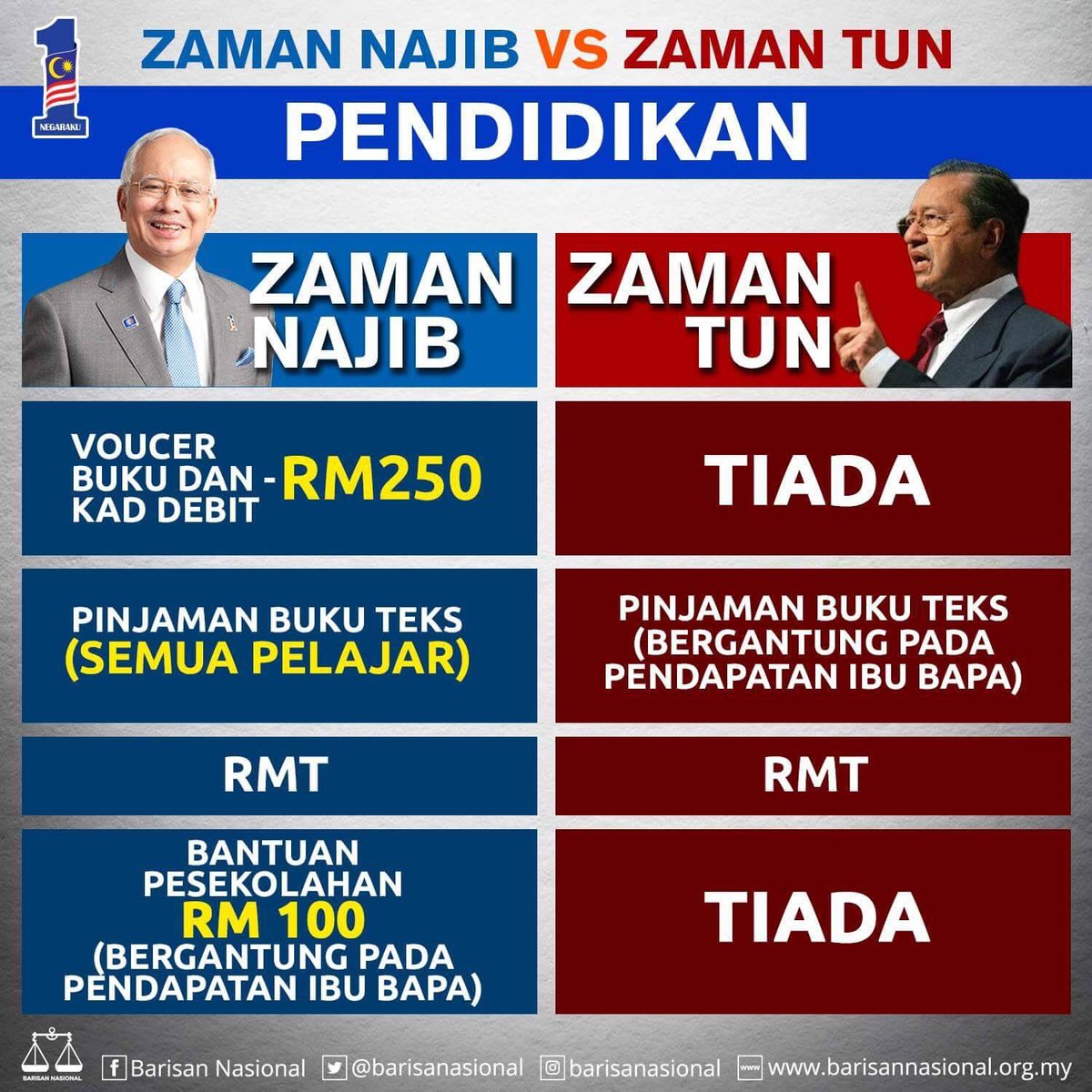 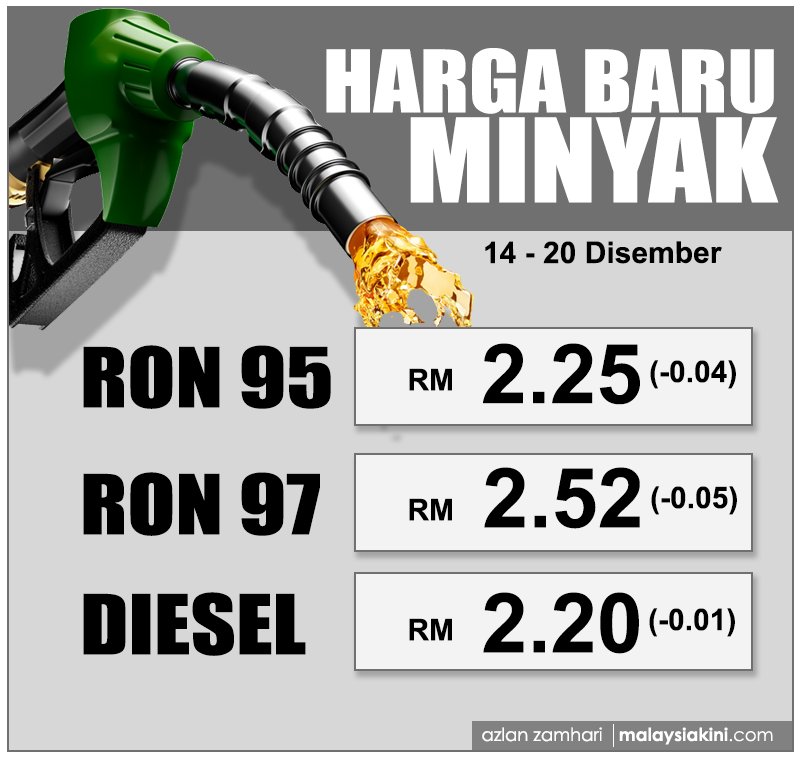