Malaysia has been betrayed by Prime Minister Najib Razak

What will it take for Najib to resign?

1MDB Saga– US Department of Justice does Malaysia a great favour...

The US Government already has seized all of this property. So now Aziz and Jho Low cannot sell anything and try to get their money out of the US.

OSTB : The amount missing is  in excess of RM27b.  And what happened to Terengganu Investment Authority's RM5 billion that they borrowed? All that money is also missing. So I dont think seizing his US property is going to cramp Jho Low's lifestyle too much.

The next step, as John Bethelsen points out, is for Aziz, Jho Low, and others to prove in a court of law that the property truly was purchased with their own money and was not the result of stealing money from 1MDB. Of course, they cannot prove that. The FBI and DOJ filing is thorough and professional. The proof is all there. It even includes the transcripts of wiretapped phone calls of Jho Low talking to his bankers.

OSTB : Yes it is amazing. Who did the wiretapping? It goes back to 2009, even before I first wrote about 1MDB in 2010. Was the wiretapping done by the MACC?

The US Government will hold all of that property — the real estate, the paintings, the rights to “Wolf of Wall Street,” etc. IN CUSTODY (or trust) on behalf of the people of Malaysia, from whom the money was stolen. But — the assets will NOT belong to the US Government.

Young Aziz will be homeless. In order to save itself and the films it has in production (including a new film about George Washington, starring Leonardo Dicaprio), Red Granite Pictures will get rid of him. So Aziz will be jobless, too.

OSTB : Mallot is being petty. Aziz still has many places to sleep at night. And he does not need a job anyway.

When the US Government files criminal charges against Aziz (and I am sure they will), they will ask the court to seize his passport, so he cannot leave the US. The Malaysian Embassy in Washington will then try to defraud the US Government and issue a new passport to Aziz so that he can leave the country — and we will see how efficient the US Government is at catching this.

OSTB : The guy is already back in Malaysia. Jho Low is in Taiwan or in the Philippines. Party days are over. Striped wardrobes accentuate wider girths.

If the Malaysian Government asks for the property to be transferred back to them, the US Government will do so. But as Berthelsen points out, will Najib do that? No. If Najib asks for the money back, it means that he is admitting that the money was stolen from the development fund that he headed, that the stolen money went to his stepson and his “advisor” Jho Low, and that he has been lying about this to the Malaysian people for years.

Of course he will never do that. Asking for the money back will have to wait for a request from a future Prime Minister. And why would Najib want to ask “for the money back,” when he and his family and cronies already have it — or have spent it?

From an international viewpoint, this is the end of Najib. He is an international pariah. He is a crook. He is a fraud. The world will want nothing to do with him. He will not be welcome anywhere. People will be embarrassed to be seen with him, to shake his hand, to be photographed with him. As for Rosmah, her credit at Hermes and Tiffany’s and elsewhere will be cut off. Now those luxury stores know that the money was not hers. It was stolen from the Malaysian people, and they do not want to be complicit. They have their own reputations to protect.

OSTB : Do you all recall the movie 'Enemy of the State' starring Will Smith, Gene Hackman and Jon Voight. Will Smith gets caught up in some government assasination plot. All his credit cards suddenly get "frozen".

Similarly this is an interesting point by Mallot.  1MO or MOF1 or MO1 has been identified as being directly involved in this misappropriation of funds. Plus Riza, Jho Low  and 1MDB 1, 2 and 3.  Since all these people have been tainted by money laundering and corruption their assets in the USA and UK can be seized. Some of their bank accounts have also been frozen - all over the world.

To be fair then ALL other banks or financial institutions caught having dealings with them should also be prosecuted. This should include their Credit Card providers. VISA, MasterCard and AmEx better be warned.  As Mallot says "and they may not want to be complicit. They have their own reputations to protect  "

True enough 1MO did use his credit card in Italy to buy some luxury goods which were settled using some of that  ill gotten money. Using credit cards or charge cards (AmEx) is another simple way of money laundering.  First they charge the purchases to their cards, then at month end they settle the credit card bills using stolen money. Clever.

Of course if their credit cards get frozen, they must use cash to pay for their purchases.  They will need suitcases to carry around all that cash.

That is how the world will react.

But how will the Malaysian people react? Will Najib get away with this, back in Malaysia? I fear that the answer is yes. If so, it means that Malaysia is now in Mugabe-Land.

The IGP says that the US Government never asked for cooperation from the Malaysian Government in their investigation. Yet both the MACC and the FBI have said that they cooperated with each other in the investigation. The IGP knows the truth, so why did he say otherwise?

OSTB :  Malulah IGP.  The AG said the same thing. That the US never requested for help from Malaysia. But the MACC and the FBI have been working together already.  Without the knowledge of the AG and the IGP?  Malulah. It makes the IGP and AG look like fools.

The Attorney General says that this is all speculation and innuendo, and that there is no proof for the US Government’s charges. Yet the US Government issued a very thorough, professional, and detailed 136-page filing with the court. It is there for the AG to read, rather than insult the US Government.

OSTB : Surely this casts a lot of doubt on the AG's capacity to grasp the subject.

As long as the IGP and Attorney General continue to deny the truth in the face of overwhelming evidence — we know where this is going. But now I have to ask my Malaysia friends — in Malaysia, where will this go? Is there no way to save Malaysia?–John R. Malott

OSTB :  As I said before, they will drive the car until it runs out of free gas. Then they will get down and just stand by the road. - OSTB 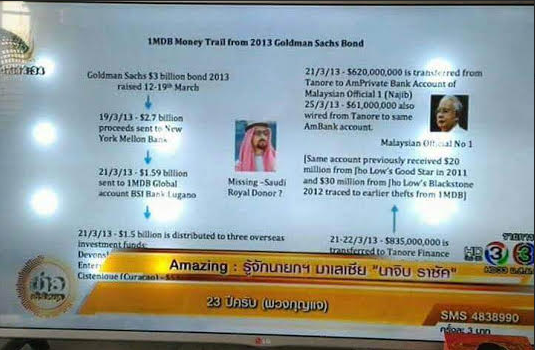 This is on Thailand TV...