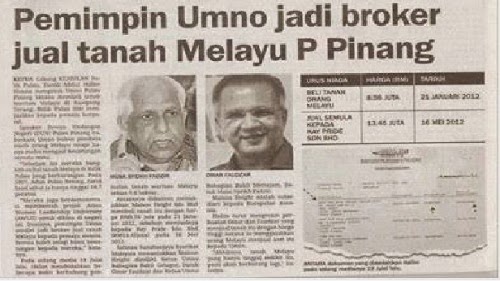 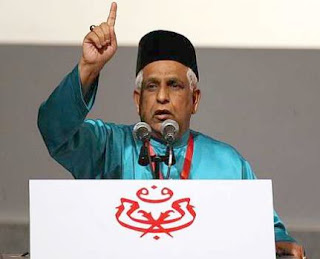 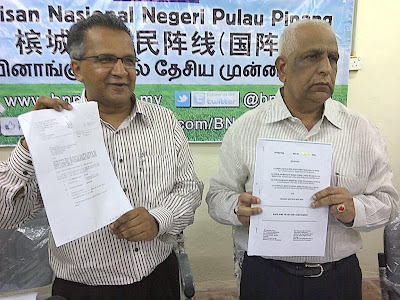 Penang Chief Minister Lim Guan Eng told a Malay crowd in Bayan Baru yesterday that it is Umno Penang leaders who bought and sold their land.

Lim said Umno had slandered the DAP and Penang government, by saying the party had purchased land in Balik Pulau, whatever the cost, to "chase out the Malays".

"It is the leaders from Umno who betrayed the Malays by selling their land for profit," he told the 100-odd crowd during his speech at the event to honour the Bukit Gedung Malay hawkers for winning a national award this year for cleanliness, safety and health.

Lim accused Umno of lying because the DAP never bought even an inch of land in Balik Pulau.

DAP had only bought a building in Rangoon Road in George Town for its Penang headquarters, he added.

Lim was responding to Wanita Umno delegate Rohaya Abu Ismail who bashed DAP and the Penang government for allegedly "oppresing the Malays" in the state, especially in land and house matters.

She blasted the DAP of having an "hidden agenda" to chase the Malays out from Balik Pulau.

The plot was bought over from 31 land owners by Maison Height Sdn Bhd, he explained.

Three months later, on May 16, a similar plot of land was sold for RM13.5 million, for a profit of RM5 million, to a third party, he added.

"These two Umno leaders should be condemned for profiting from the sale of Malay land in Balik Pulau," said Lim.

"Instead, I was blamed although I did not get a sen," he lamented.- mk

Malays the majority, will survive without UMNO...

The Malays would survive even if Umno is defeated, as they are the majority of this country, said opposition leader Anwar Ibrahim.

He was responding to the Prime Minister Najib Razak’s speech at the Umno general assembly where he said that if Umno is defeated the Malays are damned.

"For those who are young, you must appreciate the fact that you must not allow these leaders to dictate or determine our future.

“Don't let our future be in the hands of the corrupt few. You must have confidence and courage to change," said Anwar.

Anwar, also the Permatang Pauh MP, was speaking in Penang at the Konrad Adenauer School for Young Politicians Meeting on Integration, Good Governance and Democracy in Asia last evening.

He said some may be uncertain of change, thinking that BN or Umno can reform themselves or that Najib's transformation agenda may work.

However, the conduct of their leaders at this week's Umno assembly revealed that even the so-called liberals in the party has becomes "extremely racist", he added.

Anwar did not name the leaders but DAP secretary-general Lim Guan Eng had hit out at Ummo Youth chief Khairy Jamaluddin for allegedly playing the race and religious card at the AGM when he raised the issue of Malays joining the party, describing it as "chauvinistic".

Lim had chided Khairy (right), who is also youth and sports minister, he was often regarded as more liberal compared to his comrades.

Until the AGM that is, when he reportedly warned the non-Malays not to question Malay special rights, reminding them of the "promise" made as part of the social contract when the country gained independence from British rule in 1957.

"To my mind this should give us enough courage, that we have a clear choice, to overcome fear," Anwar said.

"I am speaking here with confidence and a smile but in a matter of weeks, I can be a free man or I may be in jail," he added, referring to his second sodomy case, which is awaiting the Federal Court's decision.

"But our future can be determined by our common resolve."

Bastion of Malays are speaking up

Anwar said at times he felt disturbed when people ask why the Malays prefer not to change.

There are Malays who would not sit back and condone corruption or racism, he insisted.

"I can see in their tweets and Facebook comments. Young Malays even those from universities which are supposed to be the bastion of Malays are speaking up," he stressed.

He recalled the remarks of former American vice-president Al Gore (left), who said it was historical and a world record that Anwar managed to garner 52 percent of the popular vote in the last general elections.

He said he had never seen this happen anywhere in the world where there is semi-authoritarian rule, no access to the mainstream media for the opposition, where elections are allegedly fraudulent, where about 400,000 voted one week earlier and their votes are kept in police custody.

Anwar was then responding to a question by one of the participants of the session who asked how far would Najib go to allow right-wing groups - who often described themselves as defenders of Islam and the Malay race - dictate the country's future.

Anwar said jokingly, "It is like Limbo Rock, the song made popular by Chubby Checkers, how low can you go?"

But he told the 40-odd audience not to generalise because these so-called defenders of the Malays and Islam hardly talked about hardcore poverty or lack of opportunism for the poor.

"When talk of the National Economic Policy (which provides opportunities for poor Malays), they happen to be in the top financial brackets and are doing extremely well," said the former deputy prime minister.

He said such quarters are bigots who try to show how righteous they are but "there is nothing religious about their lifestyle".

"If you are so racist, you cannot represent Islam," Anwar quipped.

However, Anwar noted that in authoritarian rule, there is always a tendency to swing to the extreme when leaders are desperate.

"Patriotism is the last refuge of the scoundrel.

"Racism is the only game they can cling on to. Can they talk about governance? Or about ridding the country of corruption?

"They play the race card because you challenge them. They will say do not question their rights. Who are they defending?"

Anwar said Malays have been in power since independence and that Malay political power is Umno's power.

"Yet, they failed miserably in protecting the Malays," he said.

After the two-hour meeting, Anwar met with the Penang chief minister at a ceremony to honour the Bukit Gedung Malay hawkers complex in Bayan Baru, which won a national award this year for cleanliness, safety and health.