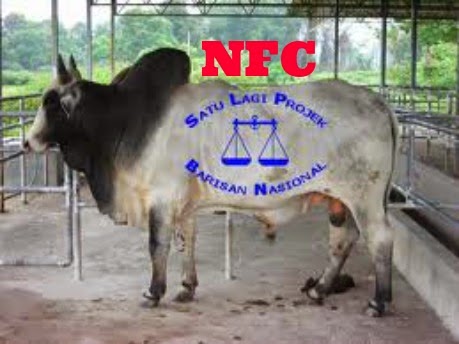 Get back every sen from NFCorp...

The PKR Pandan federal lawmaker said the Barisan Nasional-led government should also go after the company's directors and their assets to recover the money owed.

"The government must not forget other things, including the 2.5% interest on the loan, which works out to RM50 million after six years. This is a substantial amount," he said in the parliament lobby today.

In his written reply to Khalid Samad (PAS-Shah Alam), Najib said NFCorp had only repaid RM34.98 million to date.

Repeated notices to the company that ran the National Feedlot Centre and is owned by the family of a former Umno minister had been ignored, prompting Putrajaya to cease its agreement with NFCorp and initiate legal action.

Rafizi, who catapulted into the limelight in 2011 after highlighting abuse of funds by the company, said a cursory glance at Najib's reply looked as though the government was pursuing action only on the principal loan and without including the interest accrued.

"I will continue to press the government to account for every single sen owed," he said.

He expressed worry that the government was only giving the impression that it was taking action against the company.

"I fear it's a show to appeal to the public and in the end, it might not recover much," he said.

To ensure all money was recovered, Rafizi said Putrajaya must go after the NFC directors and their assets.

"If the government sues NFCorp, they might not recover much as the company does not hold much assets," he added.

The NFCorp scandal was first exposed by the Auditor General Report 2011, which stated that the cattle-rearing project had not met its milestones, followed by revelations by Rafizi that the funds were abused to buy high-end property.

The project was awarded to NFCorp operated by the family of Wanita Umno head Datuk Seri Shahrizat Jalil, whose husband Datuk Seri Dr Mohamed Salleh Ismail chaired the company's board of directors, which included the couple's children.

They were later alleged to have misused the government's allocation of RM250 million for the project.

Salleh pleaded not guilty in March last year to two counts of criminal breach of trust involving some RM49.7 million, with regards to the purchase of two condominium units and two other charges under the Companies Act. – tmi

The federal government will cancel its contract with the National Feedlot Corporation (NFC) and subsequently take legal action against them over defaulted payments.

The Finance Ministry said in a written answer in Parliament that the NFC had failed to fulfill its progressive repayment of the government's RM250 million loan for the organisation for the year 2014, and had also failed to comply with subsequent demands to make the payment.

"The government will then cancel the agreement with NFC and will take legal action," the written answer said, in response to Khalid Samad (PAS-Shah Alam).

Over the past two years, NFC had paid RM34.98 million of the loan taken.

In the written answer, the government stated that the initial loan, with interest, was due to be paid back between 2012 and 2028.

NFC chairperson Mohamad Salleh Ismail (right) has been charged with two counts of Criminal Breach of Trust (CBT) over the NFC controversy in the past.

Meanwhile, PKR's Pandan MP Rafizi Ramli said that the government must also pursue the RM50 million of interest payments on top of the RM250 million in soft loans handed out to the company.

"They must also pursue the annual interest, which over 16 years, works out to an extra RM50 million," he said. - mk