The Incredible Sulk of Pakatan Rakyat...

How else can one describe PAS president Datuk Seri Abdul Hadi Awang these days except by calling him the Incredible Sulk?

Since the Selangor menteri besar imbroglio, the party president has been less friendly with his colleagues in Pakatan Rakyat (PR) and has been absent from key leadership meetings.

"I don't need to be asked, if I want to attend, I will attend," he said when asked by reporters in Gombak yesterday concerning a resolution passed by the DAP central committee urging him to show up at the PR leadership council meetings.

He was also non-committal when asked whether he would attend the next meeting.

"That's up to me on whether to attend or not," he said.

Of course, his party has defended him, saying it is his right and that other parties should not interfere with a man who has admitted to being unwell lately.

Yes, it is his right. But this is coalition politics we are talking about, a partnership that requires the top leaders to work together. Otherwise, why bother staying on without the commitment?

Does Hadi want to be treated as some sage and senior leader but who can't even do the minimum – attend meetings? It is astounding that his coalition partners have to persuade and cajole him to attend meetings.

It would appear that Hadi has skipped meetings for one reason and one reason only: he and his ilk in PAS have little respect for the concept of coalition politics.

In PAS, everything is done to suit his whim and fancies, like some feudal state where a leader's wish is everyone's command.

That mindset is for a big fish in a small pond. But don't all fish want to swim in a bigger pond, lake or even the sea? Is Hadi content just to be PAS president? After all, he failed to keep Terengganu in the 2004 elections.

Is he choking at the prospect of PR actually winning the general elections and he then having a chance to be part of a government that has to govern Malaysia?

Whatever it is, sulking and staying away is infantile and not something that adults do. Hadi and his party have to man up, face their partners and move on after the Selangor MB fiasco.

Or just break up like adults and forget about being in politics.

Politics is for those with a clear mind and a brave heart, not for those who easily succumb to their emotions. – tmi 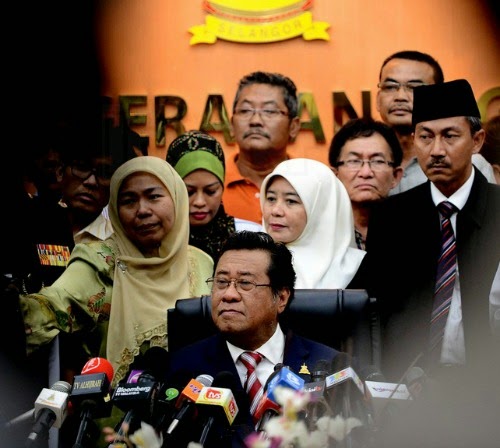