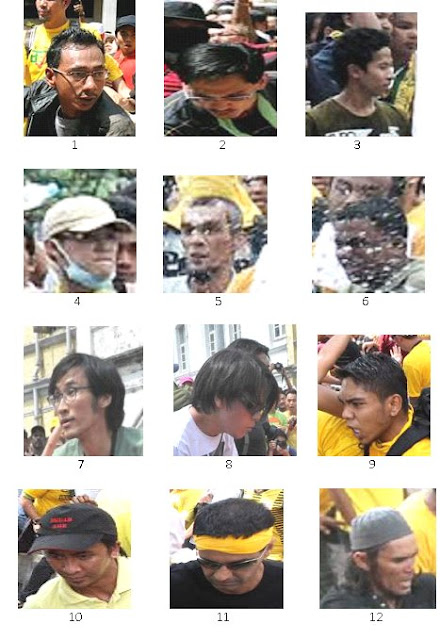 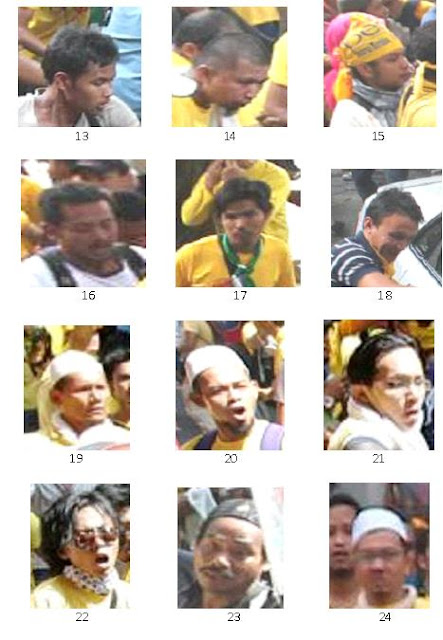 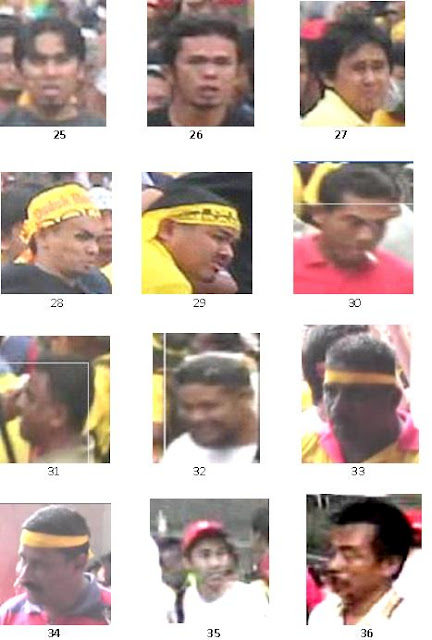 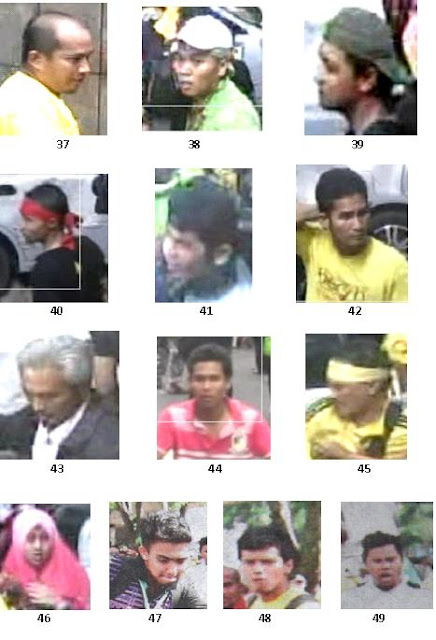 Rasah PKR division deputy chief R Thangam became the first person to be charged in connection with the Bersih 3.0 rally.

He responded by pleading not guilty and claimed trial to both charges, despite only having to choose one.

His lawyer Latheefa Koya lamented that the charge was read out very late in the afternoon, which nearly became a problem for Thangam to arrange bail.

She also complained that the Attorney-General's Chambers (AGC) appeared to be attempting to make a spectacle of the case by issuing a statement even before the charge was read out.

"I'm surprised the press knows about the charges before the lawyers did," she said.

"We are wondering what their priority is. Are they trying to make an example out of Thangam?"

Did AG jump the gun?

Thangam is widely believed to be the first man to breach the barrier, which was erected to enforce a court order barring anybody from entering Dataran Merdeka that day.

In a press release earlier today, the AGC said there was sufficient evidence to charge "a man" in connection to the Bersih 3.0 rally.

“Available evidence shows that he had defied an order of the magistrate given under Section 98 of the Criminal Procedure Code, which was issued on April 26,” reads the statement.

The magistrate’s court order barred the organisers of the assembly and members of the public from convening at Dataran Merdeka from midnight last Friday until May 1.

Thangam was arrested at his Seremban residence by a large group of police personnel in the wee hours of May 1 and taken to the Jinjang police station, north of Kuala Lumpur.


The act of breaching police barricades at the intersection near Jalan Raja and Jalan Raja Lautduring the height of the Bersih 3.0 rally on Saturday is not considered as violating the court order, said the Bar Council’s constitutional law committee chief, Syahredzan Johan.

Speaking to an audience of about 200 people at a forum themed ‘Behind the Barricades: A Critical Analysis of Bersih 3.0' last night, Syahredzan (right) said the court order only prohibits the public from entering Dataran Merdeka, not the surrounding roads.

He said the police could not erect barricades in areas near the Royal Selangor Club and Jalan Raja as those places are not considered part of Dataran.

“I think it’s a trap (from the police). They set up barricades on the roads and said you cannot breach that.

“But what is it that cannot be breached? What court order? The court order only says you cannot breach the Dataran, not the barricades,” he said.

The controversial action at around 3pm that day was widely seen as triggering the police crackdown on the protesters with rounds of tear gas and chemical-laced water.

Media reports in the aftermath of the rally have widely focused on whether PKR de facto leader Anwar Ibrahim and deputy president Azmin Ali were responsible for instigating the protesters into breaching the barricades; and a PKR grassroots leader from Negri Sembilan has been arrested by the police for investigation in connection with that.
‘Defying an order doesn’t mean protesters violent’

Commenting on the barricades-breaching incident, Boon opined that defying an order, should there been any, does not necessarily means the protesters are violent.

“I remember seeing a placard during the Occupy Dataran movement that read ‘when injustice becomes law, resistance is a duty’.

“The same goes to the Peaceful Assembly Act (PAA), it is an unjust law that takes away our freedom of assembly, so we don’t need to comply with it,” he said.

Meanwhile, Syahredzan debunked the authorities’ notion that entire brouhaha in events leading up to the rally was because they want to follow the laws.

Citing the example of the court order, he said the magistrate has “made a jump” to declare the iconic square as off-limits in the belief that Bersih’s insistence to hold their sit-in at the place will lead to chaos.

“This is a clear breach of Section 98 of the Criminal Procedure Code (CPC) which states that you must show to the court that these will occur for the order to be issued,” he said.

The MyConstitution campaign head also noted that the police, under the new PAA, can only arrest the protesters if they bring weapons, children or behave violently.

“But were the protesters told why they were arrested that day? No! Even the lawyers were not allowed to see them,” he said.

Under Article 10 (1)(b) of the federal constitution, he continued, all citizens can hold a peaceful assembly unless it threatens national security or public order.

“In this case, traffic jams and loss of business are not part of the considerations,” he said.

He added that the Dataran Merdeka by-law of Kuala Lumpur City Hall had also made the federal constitution subservient to the city hall.

“If you come down to the laws, you can see what the authorities did was a blatant disregard of the laws.

“They make a mockery out of the whole system,” he said. 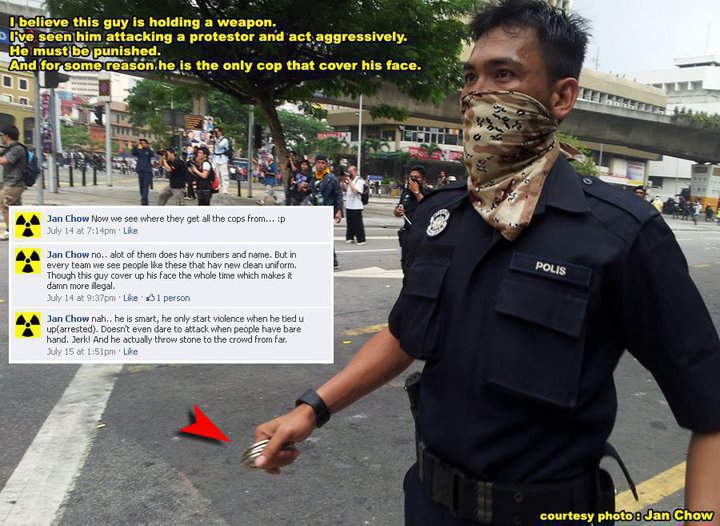 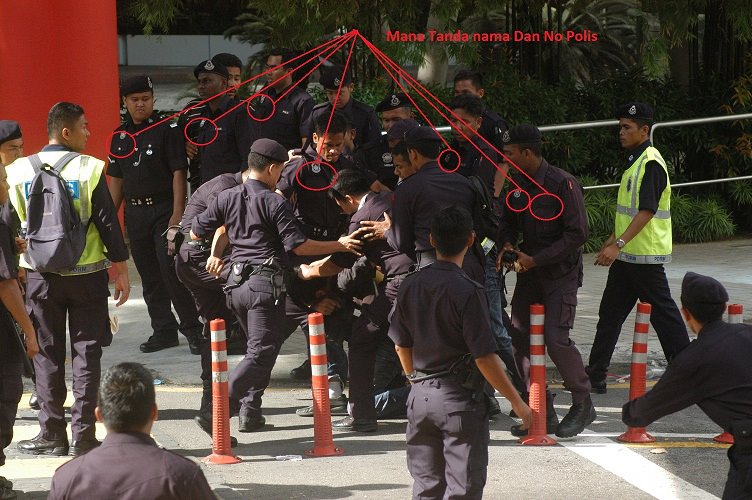