Bersih supporter hit by tear gas may lose sight in one eye...

One the most serious victims of tear gas during the chaos of Bersih 3.0 rally has come forward today to tell his tale of woe.

Asrul Wadi Ahmad, 26(right), from Kepala Batas, has been reviewed by four doctors and may be diagnosed as blind in the right eye if his condition does not improve in six months.

Asrul said he was hit by a tear gas canister directly on his face at about 3.15pm around Masjid Jamek, when he was participating in the Bersih protest on April 28.

A member of the public has uploaded a  video of the incident on Youtube.

“I lost vision in my right eye, and whenever I look, there is a black spot in my vision. The doctors I consulted told me that the impact on my eye had been due to an object which hit it at high speed,” Asrul told a press conference in Penang.

Asrul said the situation was calm when he was around Masjid Jamek, but suddenly turned chaotic when the tear gas was fired into the crowd.

When the canister hit him, Asrul fell to the ground and was assisted by members of the public who took him to a nearby hospital, where he was given nine stitches below his eyes.

When asked if he regretted his decision to participate in the rally, Asrul said, “No, this is the people’s struggle.”

He added that he would join another rally if a Bersih 4.0 was organised.

“As youths of the nation, we have a responsibility to ensure that our country remains democratic,” he stressed.

Asrul is in the process of initiating legal action against the police for his condition. He has also lost his job as a mechanical engineer in a manufacturing company in Penang, where he had been offered the job before the Bersih event.

“They told me the job needs someone with good eyesight, and with my condition, I can no longer be a suitable employee,” he lamented.

The Bersih event, following the firing of tear gas, had resulted in scores injured, including journalists covering the event, who claimed they were beaten by the police while on duty.

Meanwhile, a medical doctor Dr Khim Pa, who accompanied Asrul during the press conference, said the impact of the tear gas canister on the victim’s eye was “very serious”.

“There was damage to the interior chamber of his eyes, his iris was damaged, and there is a blood clot behind his retina,” said the doctor.“According to the eye specialist, his eyes could not be operated on as there is already scarring on his retina and his nerves there are damaged,” he added.

“If he looks at you, Asrul can only see hand movements and not fingers, he can only see a bit around the edges,” he stressed.

Dr Pa said that Asrul’s blindness may be permanent and in six months if his condition does not improve, he will be certified as “legally blind”.

Meanwhile, Suaram secretariat member Ong Jing Cheng condemned the police for their violence and the attorney-general for persecuting Bersih participants.

Ong said the police and the AG’s office have become “instruments” of the government to bully the people.

“Both these institutions have been used to instill fear in the people who participate in peaceful gatherings,” said Ong at the same press event.

Ong said after two major rallies by Bersih - on July 9 last year, and April 28 - the government and Election Commission have yet to view seriously the demands of Bersih for clean and fair elections.

He urged victims of police abuse during the last Bersih rally who live in the northern region to come foward and lodge police reports, if they have not done so.

“It is best that we from Suaram try to accompany the victims to lodge police reports because we have received complaints that some who go by themselves are instead abused by the police,” said Ong.

The victims are also urged to lodge reports with the National Human Rights Commission (Suhakam), which has pledged to conduct a public enquiry on the police violence.- malaysiakini

Ambiga a victim of race and religion, says Pak Samad...

Today, as Bersih co-chairperson Ambiga Sreenevasan's Bukit Damansara residence is turned into a bizarre combination of a mini market, crime scene and conflict zone with pro- and anti-Ambiga groups taking their positions under the watchful eyes of the authorities outside her house, it is business as usual at the Bangsar Utama flat of her fellow co-chairperson A Samad Said.

Since the Bersih 3.0 protest on April 28 which organisers claimed saw some 250,000 participants taking to the streets of Kuala Lumpur, anti-Bersih groups have taken their counter-protest to the doorstep of Ambiga’s residence with burger stalls, butt exercises and now, a mini-market.

But for the 77-year-old A Samad, or more fondly known as Pak Samad, the situation at his residence has been anything but unusual, despite his cheeky baiting of the protesters at Ambiga’s residence.

This tale of two Bersih chiefs, Pak Samad said, is likely because Ambiga is being targeted for her race, religion and to some extent, gender; issues that are often played up by the powers-that-be.

“Ambiga should rightfully lead, she is a lawyer with vast experience, she has received various awards but unfortunately, she is an Indian, a non-Muslim, that is unfortunate.

“If Ambiga was me, these threats targeting her would not have happened,” he said in an interview with Malaysiakini on Tuesday.

Adding that race was inherently a contentious issue, he said this is being manipulated and perpetrated by the powers-that-be with claims such as the position of Malays are being threatened.

The national laureate added that he, too, has faced accusations of a similar nature, though not as severe as the harassment faced by Ambiga.

‘I’m already Malay, I want to be Malaysian’

Among the accusations, he said, was that he has betrayed his own race by participating in the Bersih movement.

“To say that I am not championing my race... There is no need to ask me to be Malay, I am already Malay, I want to be Malaysian,” he said in his usual poetic tone.

The septuagenarian added that he has also been labelled as senile, to which he said: “Then those who have invited me to speak, must be really foolish to invite a senile old man to talk.”

His age, added Pak Samad, has allowed him to break free of being the “slave of power”, which he described as the mainstream media when he was a journalist and editor.

“At that time, I worked in the newspapers, a servant of the powers-that-be. That time, I thought, I had children to care for, a family to care for.

“Because of that, I swallowed whatever bitterness there was for the sake of my family... But now, I am prepared to be langgar (hit),” he said.

Pak Samad is perhaps the most prominent literati in the electoral reform movement, but not all his literary colleagues share his activism, with some frowning on his action.

“The literary community is quite divided... it is not about the label of literati, but for individuals to decide whether we want to improve our democracy,” he said.

Pak Samad added that it was not his duty to convince fellow literati to the cause, instead, it was up to them to ask their heart if they should join the movement.

“My duty is merely to explain the state of our country, whether we want this to continue or we want a change,” he said.

By opting for a ‘road not taken’ by many others of his stature, the spotlight has fallen on Pak Samad, who has since been offered bodyguard protection.

“But I rejected (the bodyguards), at my age and this point of my life, even with tens of bodyguards, if my time has come, I will still die... I do not want to be accompanied by bodyguards aside from my wife, that is fate, if it’s time for death then it is death,” he said.- malaysiakini 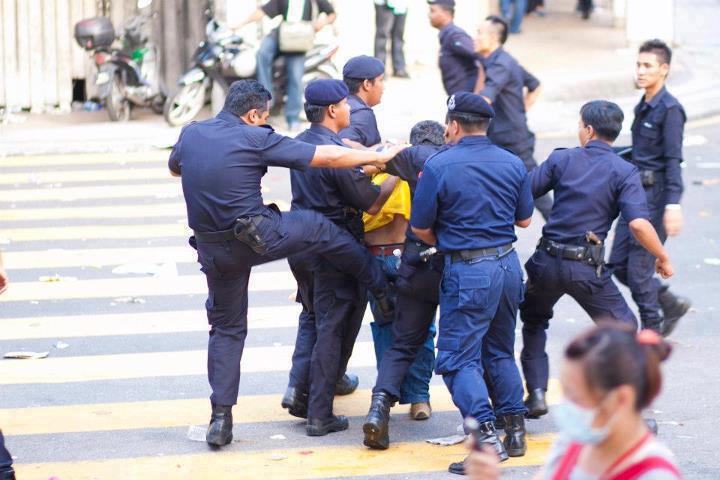 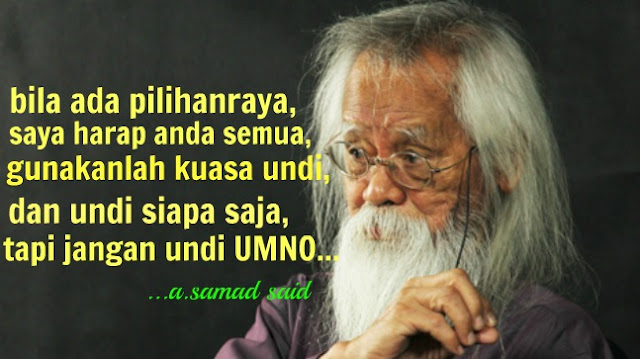