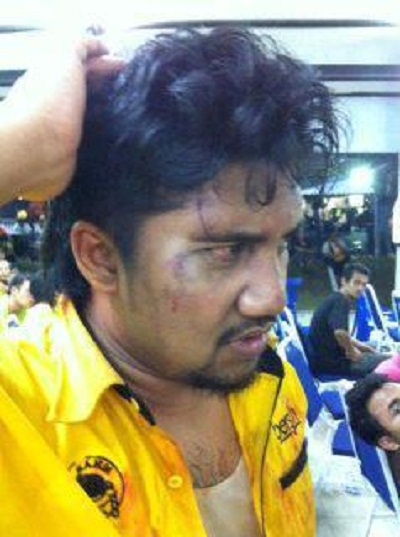 I saw police officer pull his gun on protester like a cowboy...

An eyewitness has come forward to reveal that a traffic police officer had pulled out his gun and aimed it at a protester during Bersih 3.0 last Saturday.

According to KL Lai, the police officer pointed his gun at a protester at Jalan Esfahan after another officer crashed his patrol car into protesters.

“I saw a protester freeze and put his hands up. The traffic police officer had his back on me.

"When he turned to his right, I saw he had a gun in his hand. The protester then slowly backed up and moved into the crowd,” he said.

Lai, who emailed Malaysiakini with his account, said he had witnessed the incident from the Sogo shopping mall at the corner of Jalan Esfahan and Jalan Tuanku Abdul Rahman.

“I didn’t go very close... the incident lasted less than a couple of minutes,” he said, noting that it occurred at about 4.30pm.

Lai said he did not see any provocation being made against the police personnel at that point, but there was “a lot of shouting”.

“Police were arresting and beating up people at that point and others were trying to intervene. I did not see anyone throw anything at the police,” he said.

Lai added there were other police personnel in blue uniform in the area but they did not stop the armed traffic police officer.

However, Berita Minggu last Sunday reported that a traffic police officer who was on a motorcycle was “threatened” and there were “attempted attacks” against him.

“(But) he succeeded in saving himself as the protesters retreated after he pulled out his gun,” it reported.

Lai’s account is similar to another eyewitness video footage where a traffic police officer is seen aiming his gun at a group of protesters at the corner of Jalan Esfahan and Jalan Tuanku Abdul Rahman.

The video footage from an anonymous contributor posted by Free Malaysia Today news portal shows the officer aiming his gun at protesters who appear to be moving away from him.

They do not stop the traffic police officer but go after the protesters, with their right hand on what appears to be their gun holster.- malaysiakini

Count me in for next Bersih rally, says injured protester...

"If there is Bersih 4.0 rally, I will join again as it is important that our call is implemented and not trivialised," said 26-year old Asrul Wan Ahmad (pic above), whose right eye was seriously wounded after being hit by a tear gas canister fired by police last Saturday.

Asrul however is far from cowed, and told PAS secretary general Mustafa Ali, who visited him at the Bukit Mertajam hospital, that he would be joining future rallies for electoral reforms.

Asrul was among some 200,000 people who gathered for the Bersih 3.0 rally in several parts of the capital on April 28. More than 500 protesters were arrested and scores injured, including policemen and journalists.

Asrul said after the attack, people around him took him into Masjid Jamek to apply bandage on his eye while waiting for medical help from Kuala Lumpur Hospital. Asrul said he was on his way to perform the Zuhr prayer when when tear gas was fired, causing pandemonium among a large crowd gathered nearby.

Shortly after, he lost consciousness when he was hit in the eye.

After getting treatment in HKL, he went back to his home town in Penang, where he was warded at the Bukit Mertajam Hospital in Penang. He has been getting a stream of visitors which among others include local PAS leaders.- harakahdaily 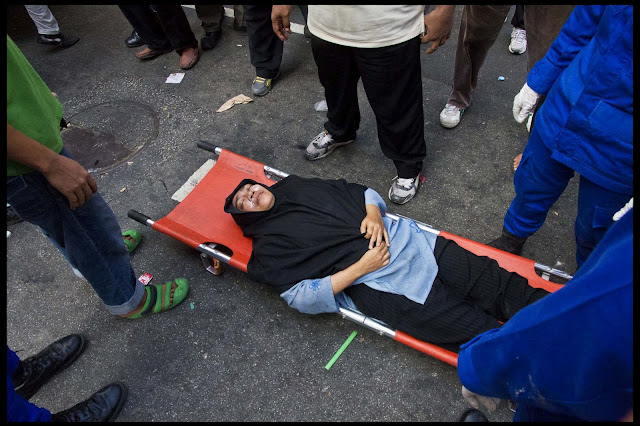 
The police brutally beat up Bersih 3.0 rally protesters last Saturday after hearing rumours that one of their colleagues had been killed by the rally participants.

"The policeman beat me endlessly and said, ‘Oh, so you are the gangsters... because of you one of my friends has died,'" rally participant and police abuse victim Mohd Syafiq Shamsudin said in an interview at the Malaysiakini office on Monday.

Syafiq (left) said he and a friend, Munir Maktar, were among many yellow-clad protesters crowding the Bandaraya LRT station at 7pm last Saturday, waiting to go home.

Although they had purchased their tickets and were queueing to enter the platform, police suddenly came and pulled them away.

"Some managed to enter the platform and into the LRT coaches. Some couldn't get into the station and they were all taken away. The police did not dare to enter the LRT station. Those sitting outside were blocked and pulled away, while those taking pictures had their cameras confiscated," he said.

Dragged to Dataran and beaten all along the way

Syafiq said he was dragged to a nearby pedestrian bridge where he was beaten, dragged down the stairs, pushed down and then dragged again, beaten and stomped as he lay on the road. He was then dragged to Dataran Merdeka.

"It was like I was nothing. They said, ‘Food is served! Come! Come!'" Syafiq recalled.

"From 6pm onwards, it was as if the police had ran amok. Anyone by the roadside and anyone taking pictures would be arrested... they didn't care anymore," he said.

His companion, Munir ( left), said he tried to photograph the policemen beating the protesters, but was spotted. He quickly put away his camera, but that did not save him from being beaten by the policemen.

He said he even showed his LRT ticket and told the policemen that he and Syafiq were leaving, but their pleas were ignored.

He said he was dragged away with Syafiq and beaten up. The memory cards of both his camera and mobile phone were seized.

"There was no respite for my face and body from being beaten throughout the walk," said Munir, who also noted that the police officers were in uniform, but did not display their name tags and serial numbers.

"The police should not have done that. They have a better understanding of the law and the procedures for arresting people, but instead they acted emotionally... The reason they beat me was that they heard rumours that a friend of theirs died," Syafiq added.

"For a police officer, that is not a valid reason to beat anyone. Only gangsters attack people as they please," he said.

Police in the aftermath of the rally announced that nobody had died during the protest.

Syafiq was later prescribed painkillers for the bruises he suffered all over his body, and eye medication for his bleeding eye, where the lower left eyelid was partially torn.

Munir too complained of pain throughout his body as a result of his beatings. He said his head above the left eye had been bleeding as a result of being elbowed, and still felt numb during the interview.

The two also denied resisting arrest, and have lodged police reports on their arrest and beatings.-malaysiakini 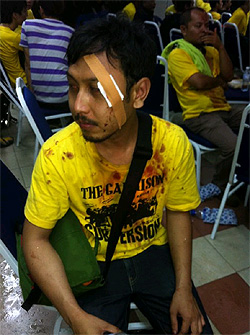