More Scorpene details to be exposed in Bangkok...

Human rights NGO Suaram will expose more details on its Scorpene legal suit in Bangkok, Thailand tomorrow, as its lawyer from France has to date failed to obtain permission to enter Malaysia.

It remains uncertain when Suaram's France-based lawyer Joseph Breham will be issued with a work visa to enter Malaysia, and as such the NGO's leaders decided to travel to Thailand to meet with him.

Brehem (left) and the Suaram team led by director Cynthia Gabriel and legal representative Fadiah Nadwa Fikri will later hold a press conference on new developments in the Scorpene submarine case the human rights group has filed in Paris.

Gabriel said the press event - at the Foreign Correspondents Club of Thailand tomorrow - is planned to "reveal further damning details from the initial findings of the prosecutors and to announce the latest developments surrounding the case".

Breham was to visit Malaysia this week, but his application for a working visa to enter the country has yet to be approved by the Malaysian authorities, leading to the decision by him and Suaram to meet in Bangkok.

His colleague, William Bourdon, was deported from Malaysia after he attended a Suaram fundraising dinner in Penang last year.

Gabriel said the press conference would help fill in the vacuum of information on gross corrupt and illegal practices involved in arms procurement in the name of Malaysia's national security.

She said that as Malaysia inched closer toward what is expected to be its most challenging general election ever, the "political temperature has escalated to an unprecedented level".

This, she said, would culminate in a "battle royale" of sorts as Malaysians were gearing for change and prepare to welcome the long overdue two-party system.

"Climaxing with this heightened scenario is the sudden commencement of an inquiry on Malaysia, 3,000km across the seas in France," Gabriel (left) said.

She was referring to the RM7.3 billion purchase of two Scorpene-class submarines in 2002; the decision of the French court to hear evidence of alleged bribery of top Malaysian officials in connection with the submarine purchase; and the grisly murder of Mongolian national Altantuya Shaariibuu with C4 military-grade explosives in 2006.

Case blackout in the media

Two of Prime Minister Najib Abdul Razak's former bodyguards have been convicted for the murder of Altantuya and they are now awaiting their appeal, which is slated to be heard in August.

Najib's close ally and political analyst Abdul Razak Baginda, who was charged with abetting in her murder, was acquitted without his defence being called.

Najib (right), who has refused to comment on the matter, was defence minister when the submarine deal was inked, but has denied any involvement in the case.

"The growing links among the three parties spell big headaches for the ruling administration, and especially for Najib, whose role in the entire scandal could bring a damning outcome to his political future," Gabriel said in an advisory sent out to the press yesterday.

"Despite an almost 100 percent blackout in Malaysia's mainstream media, the Internet is running riot with the story, and at full throttle," she added.

"It is piling up the challenges for Najib and his men as they face one of the fiercest electoral battles in Malaysia's history."- malaysiakini 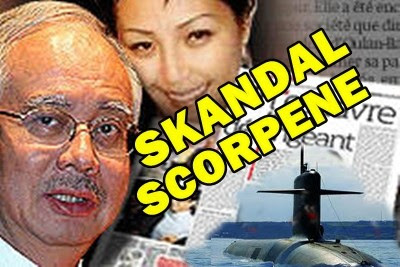 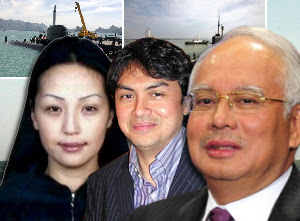 What new evidence to be expose.?

Atantuya is a KB mole.

Singapore authority blackmail because they have picture of Atantuya and big boss at the jewelerry show.