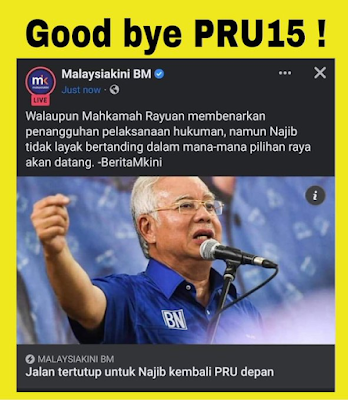 Can “Twice Convicted” Najib
Contest In Election?
Based on the verdict delivered by the Court of Appeal on Wednesday (8 Dec), former Prime Minister Najib Razak is as guilty as hell. Judge Abdul Karim Abdul Jalil, who was leading the three-man bench, not only upheld Najib’s conviction, but also laughed and ridiculed the ex-PM’s claims that he (despite stealing money) was acting in the national interest, calling it a “national embarrassment” instead.
Arguably, another man who probably could not sleep well the night before the sentencing was perhaps Mahathir Mohamad. A twice prime minister, Mahathir was responsible for bringing down the once invincible Barisan Nasional government, which led to the defeated PM Najib charged for corruption, money laundering and abuse of power in the infamous 1MDB scandal.
While 96-year-old Mahathir was glad that the Court of Appeal has maintained the guilty verdict slapped by the High Court on his protégé-turn-nemesis Najib, the old man was obviously upset that the country’s second highest court has granted a stay of execution for the world’s biggest crook. It has been Mahathir’s personal mission to see Najib behind bars.
Expressing his fear that the “stay of execution” would allow Najib to contest in the 15th General Election, which could happen as early as next year, Mahathir said it could take at least another year for the Federal Court (the highest court and the final appellate court in the country) to decide the final verdict. Already, the Court of Appeal had taken some 17 months to deliver its decision.
Responding with his trademark sarcastic wit, Mahathir wrote on his blog – “If he wins, he will remain as the MP and can also become a prime minister too. Alhamdulillah, Malaysia might create another record by appointing a convict as a prime minister”. So, can Najib, after being convicted “twice” by four judges (High Court and Court of Appeal), still contest in the coming national election?
That’s a tricky question. Most lawyers argued that while Najib would not be disqualified as a lawmaker due to the stay of execution, he is not eligible to stand for election so long as the conviction is not overturned. Others, however, are not too sure. After all, in an exclusive interview with Reuters in September, Najib maintained that he was still qualified to contest, despite the corruption conviction.
The possibility of ex-PM Najib Razak making a political comeback to helm
the country can not be ruled out , anything is possible in Malaysia Boleh...
The Article 48(1) of the Federal Constitution disqualifies a person from being a member of either House of Parliament (Lower House and Upper House) if he has been convicted of an offence by a court of law and sentenced to imprisonment for a term of not less than one year, or to a fine of not less than two thousand ringgit and has not received a free pardon.
But the simple fact that Mahathir, the man who practised dictatorial-style leadership and gerrymandering and misused institutional tools to manipulate an electoral process to stay in power for 22 years (from 1981 to 2003), has voiced his concern over the possibility that Najib can still contest speaks volumes about “loopholes” ready to be exploited and manipulated.
Was grandmaster Mahathir playing mind games when he threw the idea that the “stay of execution” will allow Najib to contest? Was Najib planning to use his family’s close relationship with the Sultanate of Pahang by virtue of Sultan Abdullah being the current Agong (King) to solicit a royal pardon, which will allow him to contest and become the prime minister again?
Exactly what Najib meant when he told Reuters that his qualification actually depends on the “interpretation” in terms of the law and the Constitution? Yes, it appears the “stay of execution” bitched by Mahathir is the same “interpretation” that Najib plans to use in order to contest in the coming nationwide election. It’s debatable whether a stay of execution also means a stay of conviction.
A stay of execution would mean Najib is still a lawmaker (till the Federal Court says he is guilty), but he can’t participate in the next general election. On the other hand, if the stay of execution also means a stay of conviction, it means he may contest. But is there such thing called “stay of conviction” in the first place? There’s none, of course.
An application for a stay of execution means that the party is applying to postpone the sentence pending hearing at the appellate court. However, if a stay of execution also means a stay of conviction, it means Najib has not been convicted (or is still innocent), which is not true at all because the High Court and Court of Appeal had both decided that he is “GUILTY”. 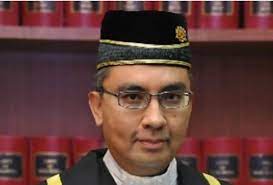 High Court Judge Nazlan Mohd Ghazali...
In short, before the High Court delivered the guilty verdict, Najib was considered innocent. The moment High Court Judge Nazlan Mohd Ghazali decided on 28 July 2020 that Najib was guilty, Najib is no longer innocent. From 28 July 2020 onwards, Najib is considered guilty – till either the Court of Appeal or the Federal Court says otherwise, or a Royal Pardon is granted.
Therefore, when deputy public prosecutor Mohd Ashrof Adrin Kamarul said that the stay is on both execution and conviction, either he was high on grass or the Attorney General’s Chambers (AGC) being led by Attorney General Idrus Harun had no idea what they were talking about. Now, do you understand why former A.G. Tommy Thomas wrote in his book about the incompetence of the AGC?
In fact, convicted Najib should be sent to prison effective 28 July 2020, and not allowed to walk around like a “free man”, as complained by Mahathir. It screams double standards of the highest order when a man found guilty was allowed to enjoy free police escorts, and rewarded with RM100 million worth of land the size of two soccer fields along with a mansion to be built with taxpayers’ money.
In truth, whether Najib is disqualified to contest or otherwise is in the hands of the Election Commission. In addition to the Article 48(1) of the Federal Constitution, regulation 7(1) of the Elections Regulations 1981 requires a returning officer to reject a candidate’s nomination paper if that candidate is disqualified from being a member of the House of Representatives under the Constitution.
Thus, when Article 48(1) of the Federal Constitution and regulation 7(1) of the Elections Regulations 1981 are read together, not only a person can be disqualified from being a Member of Parliament, but can also disqualify that person from contesting in a Parliamentary or State election (or by-election). Exactly what is the position of Najib today?
This is where the magic works in the extremely corrupted Election Commission after more than 60 years of indoctrination to help Barisan Nasional government stays in power – by hook or by crook. The returning officer of the Election Commission has the ultimate power to accept a candidate or to disqualify a candidate. If the officer says Najib can contest, not even the God can reject him. 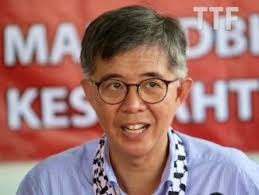 For example, during the highly explosive 14th General Election in 2018, at least six Opposition Pakatan Harapan candidates were disqualified even before the battle begins. The most high-profile case was the disqualification of Opposition PKR vice-president Tian Chua, an incumbent MP of the Batu parliamentary constituency for 10 years since 2008.
Returning officer Anwar Md Zain said he was advised by the Election Commission to disqualify Tian Chua’s nomination due to a RM2,000 fine. Tian Chua was convicted for insulting a police officer in April 2014 and was fined RM3,000 and jailed 6 months by the Session Court in March 2017. However, the High Court reduced the fine to RM2,000 in March 2018 after an appeal.
Hence, Tian Chua was perfectly qualified to contest the May 2018 General Election. The Election Commission, however, deliberately and falsely interpreted the law – a fine of not less than RM2,000 – to disqualify Tian Chua. Even Parliament Speaker Pandikar Amin Mulia had earlier ruled in 2011 that Mr Chua was not disqualified as a Batu MP as he was fined below RM2,001.
When grilled, the despicable Election Commission chairman Mohd Hashim Abdullah said the rejected PKR candidate can file a petition in court. On November 2019, the High Court declared that the Election Commission’s move to bar the PKR candidate from contesting in the 14th General Election in 2018 was unjust and unlawful. Of course, by then, it was too late for Tian Chua.
Fortunately, the backup plan was to endorse independent candidate P Prabakaran, who later won the seat and joined PKR, and has remained loyal to the party ever since. But the fact that Tian Chua had fought all the way to the Court of Appeal and Federal Court before his lawsuit was remitted back to the High Court for trial goes to show how dirty and corrupt the Election Commission is. 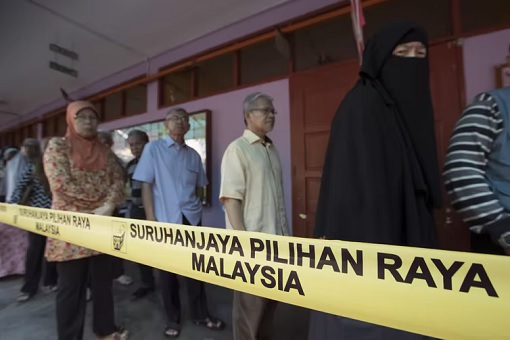 Using the same shameful trick, the Election Commission can definitely reverse what it did to the legitimate candidate Tian Chua by approving an illegitimate Najib to contest in Pekan constituency. Sure, everyone can scream and cry over the flawed eligibility of the UMNO crook. By the time you sue the commission for abuse of power, it will be water under the bridge.
The returning officer of the Election Commission can stage a stupid drama, conveniently twist and spin that since the Court of Appeal has granted Najib a “stay of execution”, the ex-PM is considered innocent, when in reality he is guilty as per both verdicts delivered by the High Court and the Court of Appeal. When Najib wins and becomes the PM, no judge will dare to nullify his illegitimacy.
The Election Commission still has tons of dirty tricks under its sleeve, including using the police and election officers to physically prevent opposition from entering the nomination centre, as in the case of PKR candidate Dr Streram Sinnasamy in the state seat of Rantau. By making life difficult for the Opposition, Mohamad Hasan (current UMNO deputy president) shamelessly won unopposed.
There were also many instances where the commission unilaterally declared bankruptcy on candidates during nomination day in attempts to sabotage the Opposition. Like it or not, when the Parliament is dissolved, the Election Commission becomes the kingmaker who will make or break Najib. Ironically, it was Mahathir who corrupted the independence of the institution. - FT 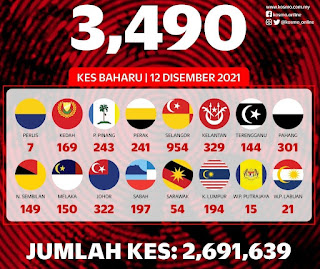