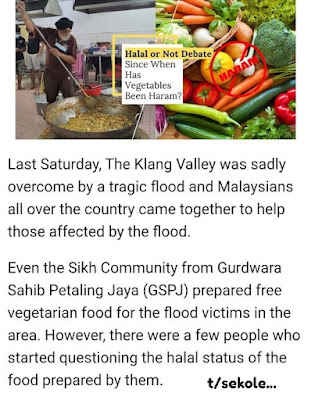 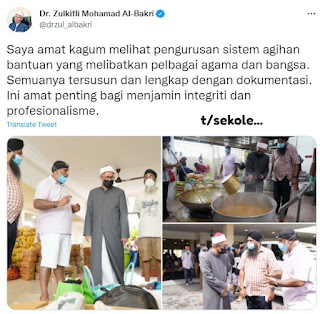 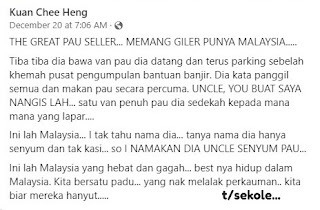 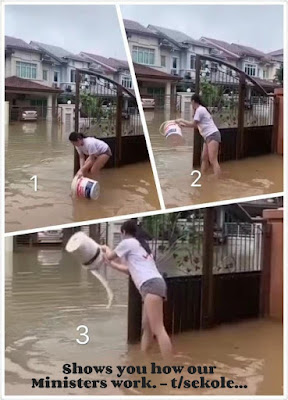 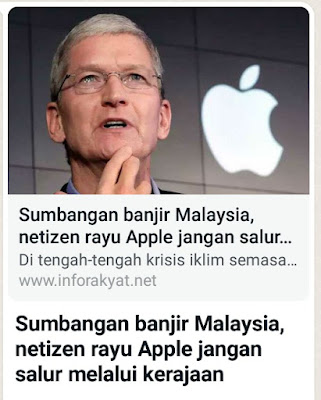 Frustration over govt's rescue
response, 'publicity' visits boils over online...
Frustration and anger over the government’s poor rescue response towards the floods as well as some politicians’ perceived exploitation of the disaster for publicity are boiling over on social media.
Netizens have posted various videos of flood victims reacting negatively to ministers visiting the affected areas or pointing out the lacklustre rescue and relief efforts by the government, among others.
Some of the videos posted include one by Twitter user Farid Reduan, who said his one-minute clip was taken at Bukit Changgang, Selangor.
In the video (above), what appears to be a government official’s car convoy, escorted by police riders, was seen driving past several people resting under a blue tent.
A woman sitting at the tent is heard quipping sarcastically as the cars pass by:
“Thank you, you guys helped out so much.
“Wow, so many (cars) here to help out with the flood.
“Tomorrow, when the flood has subsided, come again yeah,” she is heard saying, with some laughing at her last remark.
Yet another video (above) on Twitter by user Haziq Asyraf Jr showed Prime Minister Ismail Sabri Yaakob sitting in a car speaking out of the car window to a woman who was standing in front of her house.
The woman is heard telling the prime minister that her house is on high enough ground and that there are worse-affected areas further in.
Meanwhile, a video (above) posted on TikTok depicts what appears to be Finance Minister Tengku Zafrul Abdul Aziz wearing a life jacket on a boat heading towards flooded buildings with only their roofs visible.
The boat was full of people, with several also wearing life jackets. As they arrived at the roofs, the minister is helped out of the boat onto a roof.
The caption of the video claimed that the boat was full of the minister’s officers, bodyguards, as well as cameramen. 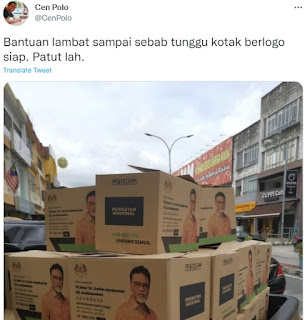 There was also a picture (above) posted on Twitter by user Cen Polo, which showed boxes of supplies on the back of a truck. The boxes were printed with the Perikatan Nasional (PN) logo as well as a photo of Kuala Langat MP Xavier Jayakumar.
“Aid arrived late because they had to wait for the boxes with logos to be ready. No wonder,” the user tweeted. 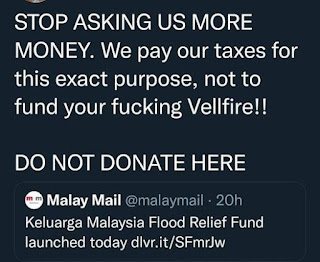 Aside from that, “DO NOT DONATE TO GOVERNMENT” is trending on Malaysian Twitter, with over 34,600 tweets at the time of writing. It is believed the phrase started trending after the government launched the Keluarga Malaysia Flood Relief Fund on Monday.
Many tweets with that phrase were of users expressing their disappointment with the government and encouraged donations to NGOs instead.
Some also expressed doubt about what the donated funds will be used for. - mk
The worst government ever!...
If there’s one thing that recent heavy flooding in parts of the country has brought home, it is that we are now straddled with the worst government we’ve ever had. The way the government responded to the crisis exposed what many have suspected for some time now – the Ismail Sabri cabinet is not just horribly bloated; it is thoroughly incompetent as well.
With each change of government, we seem to get a government that is even worse than the one before. It is not surprising though because the same incompetent ministers are frequently recycled. They give themselves high marks for performance but it doesn’t take much to expose them for the bungling, blundering and bumbling lot they are.
They have simply no clue how to govern leave alone lead. They don’t even know what their responsibilities are and what is expected of them in times of crisis. If they are not too busy passing the buck to someone else, they are trying to get as much publicity for doing as little as possible. For them, it’s all about politics; the welfare of the people is of little importance.  No wonder most Malaysians are so disgusted with them. 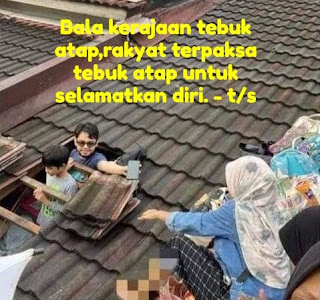 The civil service – one of the largest and most expensive in the region – too has much explaining to do. We spend so much money on all sorts of agencies which are supposed to respond to crisis situations, but they are so poorly led that they run around like headless chickens when they are needed most.
While the magnitude of the storms that lashed the country might have taken the government by surprise, the failure to manage the simple things – keeping floodgates and water pumps functional, clearing clogged drains, protecting our forests from logging and land clearing, keeping emergency response teams prepared and their equipment well-oiled, timely weather alerts, etc. – have made the situation far worse. It is a sign of the slow degradation of the basic functions of government.
Thankfully, the people didn’t wait for the government. Malaysians of all ethnicities and religious backgrounds responded by reaching out to those in need. NGOs and religious groups too rose to the occasion in splendid form providing urgently needed food and shelter. A few dedicated members of parliament and state assemblymen rolled up their sleeves and got to work as well. The speed and scope of the response by these groups couldn’t have been more starkly different from that of the government. It a reminder that it is the spirit of ordinary citizens that keeps this country going. 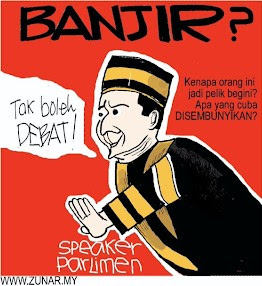 It is not the first time we have witnessed such an appalling lack of leadership in the face of a crisis. Remember the chaos and confusion that descended upon the nation when the Covid pandemic first struck? Conflicting rules and regulations, non-existent coordination, people caught in a lockdown without food and medical attention, etc. Very quickly, the whole country descended into disarray. We were still trying to recover from that colossal failure of government when the floods came.
Thanks to a series of corrupt, incompetent and pathetic leaders, our once proud nation has now been reduced to the sick man of Southeast Asia. People have grown so angry with and distrustful of the government that they have even taken to twitter to plead with both local and international donors to channel assistance through NGOs and other private organizations rather than through the government. People fear, not unreasonably, that any assistance channelled through government agencies will simply be purloined. It is a stunning and shameful indictment of the government. And a sad commentary on the state of affairs in Malaysia today. - Dennis Ignatius 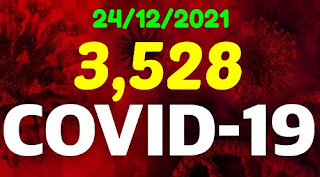