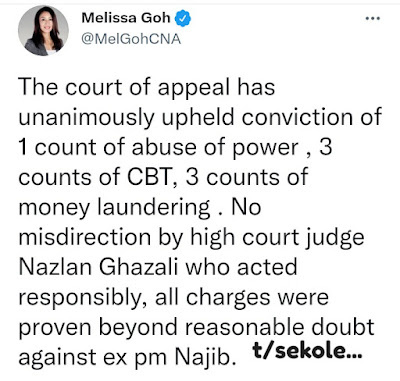 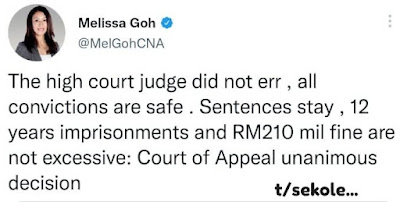 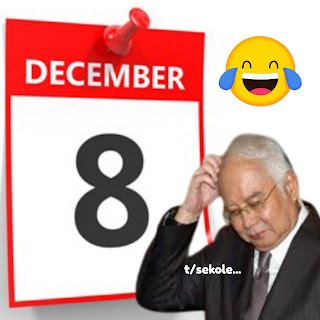 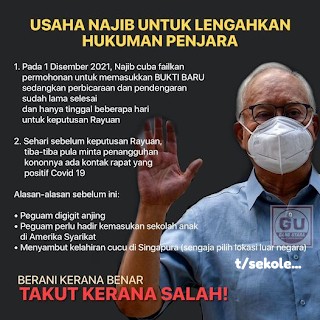 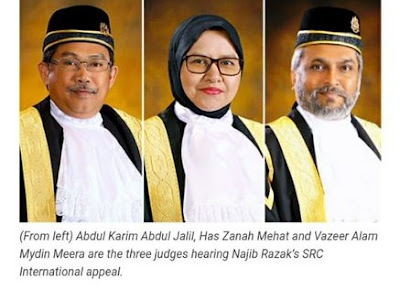 All eyes on the Judges...
Today's SRC verdict...
The Court of Appeal has today dismissed Datuk Seri Najib Razak’s application to adduce new evidence to his SRC International Sdn Bhd case.
a. Najib fails to introduce new evidence in SRC appeal, verdict expected today (8/12/21).
b. Judges not pleased with defence’s attempt to provide excuses over Najib’s no-show.
c. Najib risked being issued arrest warrant.
d. Najib will appear before three-member bench when judgment is delivered at 9am via Zoom.
The ruling came a day before the court is set to deliver its decision on the former prime minister’s conviction appeal involving the misappropriation of RM42 million belonging to SRC International Sdn Bhd.
Judge Datuk Abdul Karim Abdul Jalil, who chaired the three-man bench, said the panel disallowed Najib’s application as he failed to cumulatively satisfy the requirements of the law.
Abdul Karim noted that fresh evidence must be evidence not available in trial, relevant, credible, and creates reasonable doubt in the prosecution’s case.
“We find that the appellant has failed to satisfy Section 61 of the Courts of Judicature Act that fresh evidence is required for the justice of the case.
“Under the circumstances, we find that the additional evidence was not necessary to the substantive appeals and no exceptional circumstances were shown for the court to take additional evidence in the instant appeal. “Hence, the application is hereby dismissed. Now the delivery of decision tomorrow will proceed as fixed,” he ruled.
The other judges on the panel were Datuk Has Zanah Mehat and Datuk Vazeer Alam Mydin Meera. Following today’s ruling, the delivery of Najib’s SRC International conviction appeal decision will resume as scheduled on December 8 at 9am, where Najib will be appearing via video conferencing as allowed by the court. 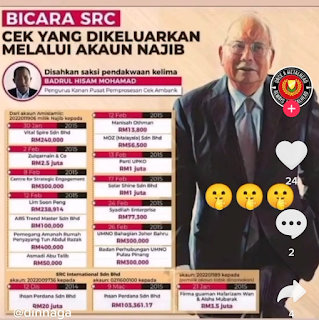 Prior to the parties’ submission before the court, Najib’s lawyer Tan Sri Muhammad Shafee Abdullah sought a further postponement of today’s hearing to another date 10 days from their quarantine period which started today.
This follows the Court of Appeal ordering Najib’s lawyers to make their case through an online hearing this afternoon or Najib would risk arrest after neither Najib nor his bailors attended the scheduled hearing. The other usual members of Najib’s legal team, who include Muhammad Shafee, Harvinderjit Singh, and Farhan Read, were also not seen in the courtroom this morning.
Muhammad Shafee had argued that no one on the legal team was able to make their case before the court this afternoon despite proceedings being conducted online. He further pointed out the necessary documents were all kept in their office which had rendered them unable to coordinate, as all of them were now undergoing self-isolation at home and separated from one another.
Thus, the senior lawyer asked for more time to put in their submissions since preparations were interrupted by the Covid-19 scare after a member of the team tested positive yesterday.
“So, Yang Arif we are putting this on record, that this is unfair, as we were taken by surprise in the morning by this hybrid proceeding. “This is a matter I have to put on record because it is not fair to us. “We are complaining this is unfair and unequal, Yang Arif, and also the time constraints for us to appear in total disadvantage,” Muhammad Shafee said.
About 40 minutes into proceedings which started at 9.20am, Faizal Shamsuddin, who is one of the two bailors, entered the courtroom at the Palace of Justice in Putrajaya and was subject to intense questioning from the judge about Najib’s whereabouts.
“Where is he? Why is he not here in court? The bailor is responsible for ensuring the accused is present in court. “Did you take the trouble to find out? Today has been fixed for hearing. You should have known. “We can terminate the bail if we are dissatisfied over the reasons given for non-attendance and issue an arrest warrant for Najib today,” Abdul Karim said. 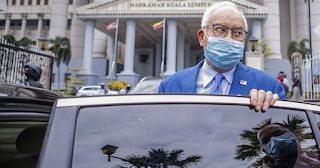 Faizal appeared to be struggling to reply to the questions, which only served to frustrate Abdul Karim further.
“Do you know where he is? You yourself are unsure as to Najib’s whereabouts? In his house? You are merely guessing. “The court is not a coffee shop. This is the court, don’t simply make guesses,” the judge chided.
Harvinder then interjected and told the court that Najib is currently undergoing self-quarantine at home. Abdul Karim dryly replied that the court is “well aware of the standard operating procedures”.
Ad hoc prosecutor Datuk V Sithambaram told the court that the prosecution was “shocked” by the turn of events. “This appears to be a last-minute attempt to scuttle the hearing and depending on the outcome, the decision,” he said.
Sithambaram said there were previous attempts to postpone the proceedings in the past, which had failed. He also pointed out that Muhammad Shafee was only a casual contact, and the defence could proceed with the hearing of their own application online.
“Justice is for both parties, for the prosecution who represents the public interest and also for the accused,” he added.
Despite Muhammad Shafee’s insistence of the handicap faced by the defence team in not being sufficiently prepared to make their case, Abdul Karim maintained his grounds for the hearing to resume at 12.30pm through Zoom.
“Yang Arif, we did everything possible to be compliant to the court. “I respectfully ask Yang Arif that this matter be heard 10 days from now because of the compulsory quarantine that is imposed on our current status,” Muhammad Shafee submitted.
“Thank you, Tan Sri Shafee for the explanation given. “We find that there is no reasonable reason for us to postpone this matter. “We disallow, disagree with the application to postpone hearing after 10 days. We now ask Tan Sri Shafee to submit,” Abdul Karim ruled. 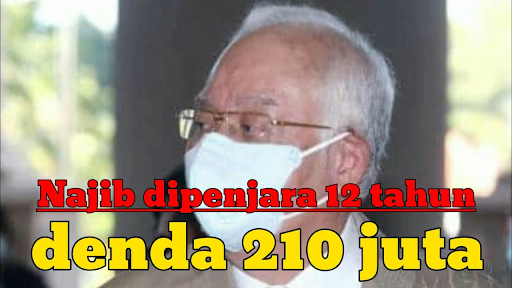 Najib’s application to add evidence to his SRC appeal was filed on December 1, which is about six months after the Court of Appeal had concluded hearing the appeal in May 2021. Najib’s application was also filed after the Court of Appeal’s November 23 announcement that it would deliver its decision on the appeal on December 8.
The Court of Appeal is scheduled to give its decision tomorrow on whether Najib has succeeded or failed in his appeal against his conviction, fine, and jail term in the SRC case. Najib was appealing the High Court’s July 28 2020 decision, which had found him guilty of all seven charges relating to SRC’s RM42 million.
The High Court had sentenced Najib to 10 years’ jail for each of six charges (three counts of criminal breach of trust and three counts of money laundering) and had also sentenced him to 12 years’ jail and a RM210 million fine with an additional five years’ jail if the fine is not paid for the abuse of position charge.
The High Court had decided that all jail sentences would run concurrently or at the same time, which would mean a maximum imprisonment of 12 years for Najib. If his appeal fails tomorrow, Najib can make another round of appeal at the Federal Court. - thetruenet 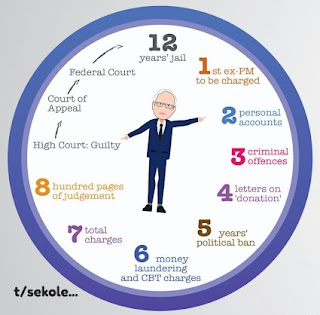 Judges please uphold justice and honesty otherwise the world will be laughing at you and Malaysia. Praying for you judges to be brave and give the right decision. - Very concerned citizen
Justice delayed is justice denied ! Let justice be done!! - Anonymous
Hakim2 perlu jujur serta berani dalam menjalankan tugas dan tanggungjawab tanpa ada rasa takut - Prejudice
The federal court does look like the last court of appeal. The problem being, the federal court will only hear and decide on questions of law and not the case itself. We will wait and see if he does go to jail. - IndigoKite6964 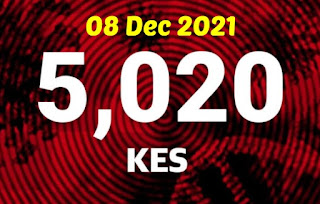