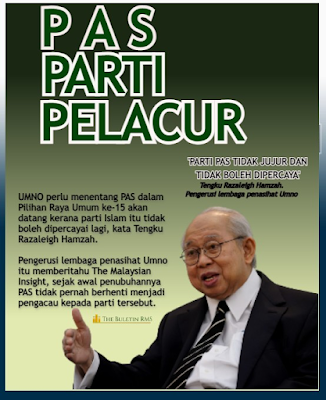 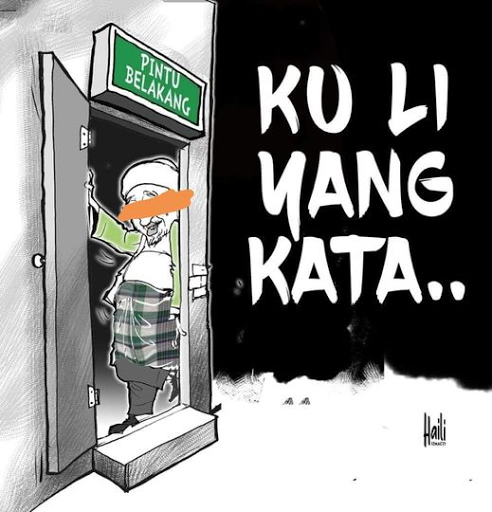 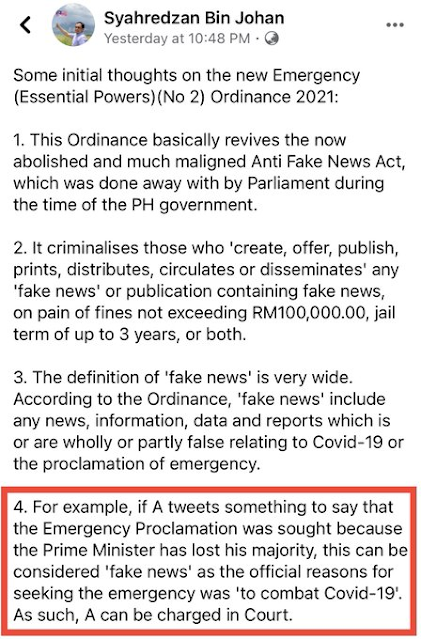 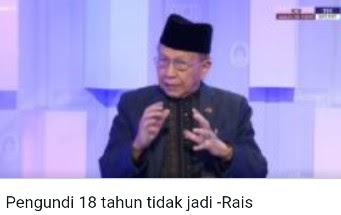 Undi 18 : Rais Yatim Should
Just Say It Was A Stupid Idea...
- Rais says impractical to lower voting age to 18
- Time-consuming obstructions in implementing it
- Rais said take time to (find) 18-year-olds and constituencies
This is the lamest excuse Rais could have made up.  Then how does our voter registration system work for 21 year olds? The system in our country is voluntary voter registration. Whether 18 years or 21 years old it is up to the voter to register himself to vote. Voting is not compulsory.  So I really dont know what Rais Yatim is talking about.  It was just another  stupid 'kuda liar'  idea by our previously unemployed MP that the voting age should be lowered to 18.
In this country you have one part of the village voting for panglima pintu belakang, another portion votes for Malu Apa Bossku and another part can vote for lebai k-nt-l.  If you ask me maybe we should increase the voting age to 45 or something.  In ancient Rome, ancient Greece or somewhere only taxpayers could vote. Before you qualified to vote you must show your taxpayers receipt.
Some dunggus who want 18 year olds to vote say that at 18 years of age you are eligible to die for your country. So why shouldnt you vote for your country at 18 years of age? Hello 'die for your country at 18 years of age' is an Americanism lah. In America they have conscription for the Army. Meaning if needed the US government can tell them to join the Army (at 18 years of age) and go and get killed somewhere in the world. 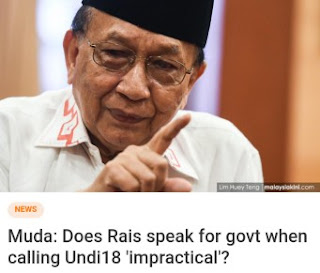 This is why dinosaurs like this one must no longer have the power to dictate the future of this country. Depriving the youth to be engaged in political issues, esp voting, will cause an increase in apathy, disengagement and disenfranchisement. Shame on you!!!...
In Israel and Singapore they also have conscription  where 18 year olds are conscripted into the Army.  In Israel, Army service is compulsory for both 18 year old males and females. In America and Singapore compulsory Army service is for males only.
In Malaysia our Army is a 100% volunteer Army. So far we do not need a conscription Army because there are so many unemployed in the country. There is always a long queue to join the Army, the Police, the teachers training colleges,  the Civil Service etc. So in Malaysia there is no such thing as 'die for your country at 18 years of age'.   In Malaysia it is more likely that 18 year olds can die racing their motorbikes on the way to the voting booths.
It does not matter if you are 45 years old. If you can support Malu Apa Bossku it simply means that you are retarded. It does not matter if you are Malay, Chinese, Indian or whatever. If you support a "47-kali-naik-turun-tangga-High-Court" nutjob as your political ally it means that you suffer an extreme case of "masuk-pintu-belakang" disease. You are retarded. 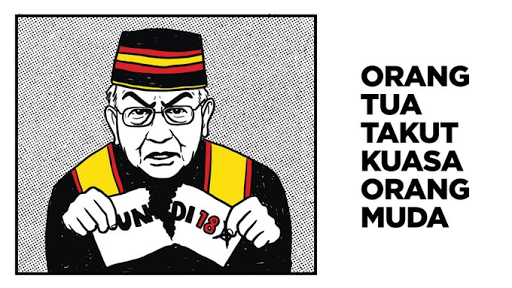 But that is exactly what your Panglima Pintu Belakang is saying now. He says he does not rule out the possibility of cooperating with Dumbno. And despite this, there are Indians and Chinese who still support Panglima Pintu Belakang.
When Dumbno teamed up with Muhyiddin you screamed 'Pintu Belakang, Pintu Belakang'. When your own Panglima Pintu Belakang wants to team up with Dumbno you all scream 'Here is my b_ckside, here is my b_ckside'.  How does that logic work lah?
I am glad that Undi 18 crap is not going through. Please formalise it and just abolish, annul or whatever the earlier Parliamentary approval.
The 21 year old voting age we have in this country is just fine. Why tamper with something that is not broken? Another case of tikus dunggu membaiki labu.What we need is more outside the box thinking in the country. Your voting age really does not matter. Whether you are 18, 21 or 45 if you cannot think logically and commonsensically  then your vote is not going to be the best vote. - Syed Akbar Ali 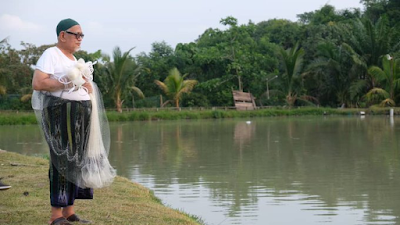 Why PM Muhyiddin refused to bring Hadi to Saudi? -
Coz Hadi is a terrorist to Saudi Arabia and Allies...
Everyone would be eager to follow Muhyiddin Yassin and his entourage to Saudi Arabia for obvious reason. A free trip to the kingdom of the Custodian of the Two Holy Mosques would provide not only an opportunity to visit the Kaabah and other Islamic places, but also to perform “Umrah”. So, why didn’t Hadi Awang follow the prime minister’s four-day official visit to Saudi?
It’s incredibly strange that the holy PAS Islamic party president would miss a golden opportunity to the holy land. It’s not like Mr. Hadi was busy with his work. It screams “X-Files” paranormal phenomena that as Special Envoy to the Middle East with ministerial rank, Hadi was excluded in the delegation, a trip which involved a meeting with the Saudi’s future King.
After all, the position – Special Envoy to the Middle East – was especially custom-made for the supposedly holiest man of PAS. The title alone suggests that Hadi Awang was influential enough to represent Malaysia not only in Saudi, but also the entire Middle East region. Therefore, it’s a humiliation of the highest order that his boss had refused to bring him together.
Exactly why was the prime minister so ashamed of the PAS president? As weird as it may sound, PM Muhyiddin could not bring Hadi Awang with him, even if he wanted to. Hadi may carry an impressive badge as a special envoy, but as far as Saudi Arabia and its allies (United Arab Emirates, Bahrain and Egypt) are concerned, Hadi Awang is still regarded as a terrorist.
Yes, PAS president Hadi Awang is a “terrorist” by virtue of him as one of the four vice-presidents of Qatar-based International Union of Muslim Scholars (IUMS), an organization which Saudi, the de-facto leader of the Middle East, has banned and categorised as a “terrorist organization”. Obviously, PM Muhyiddin could not bring a terrorist to meet Crown Prince Mohammed bin Salman.
The special aircraft of the Malaysian leader will not be allowed to enter the Saudi’s air space if Muhyiddin insisted on bringing Hadi. Even though Saudi was desperate for friends after a U.S. intelligence report, approved by Biden administration, finally exposed that Saudi Crown Prince approved the murder of exiled Saudi journalist Jamal Khashoggi in 2018, the kingdom takes very seriously the threats of terrorism. 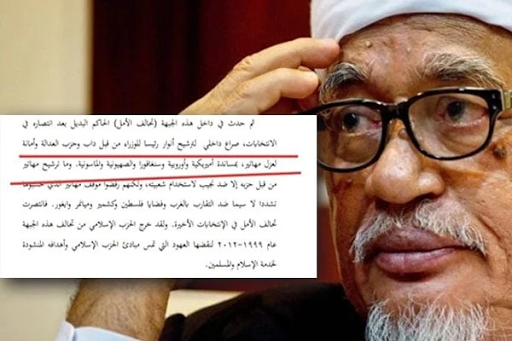 Hadi Awang – One of Four Vice Presidents of IUMS Terror Group
The fact that Saudi refused to give face to Muhyiddin in the case of Hadi Awang speaks volumes about how radical, extreme and dangerous the PAS president is. But the backdoor prime minister has his own priorities with his first official visit to Saudi – to enhance cooperation in trade, investment, Islamic affairs and to ask for financial help in funding the coming general election.
Hadi’s failure to step foot on Saudi soil also means a letter which he wrote last year had indeed ended up in a trash bin. Upon his appointment as special envoy, the PAS president had written a letter in Arabic to all Muslim leaders worldwide in order to justify his new position. The letter was meant to impress upon Saudi of his legitimacy, which fails spectacularly.
In the letter, which was exposed in April 2020, Hadi had falsely claimed that the legitimate and democratically multiracial elected Pakatan Harapan (PH) government was working in cahoots with the U.S. and European countries to bring down then-Prime Minister Mahathir Mohamad. He had also lied that PH’s victory in the 2018 General Election had benefited or sided the non-Muslims.
Claiming that Mahathir had been used by non-Muslims in PH to topple former premier Najib Razak, the despicable PAS leader had rained praises on Mahathir, saying the 94-year-old man was a bigger champion of Islam. Hadi accused PH of having achieved power through treachery, when in fact Hadi and Muhyiddin were the real traitors who seized power undemocratically.
In the same letter, Hadi rejected PM-in-waiting Anwar Ibrahim due to his questionable personal character (presumably related to his sodomy conviction) as well as his dangerous political pragmatism. However, the PAS president deliberately hid the fact that Anwar had officially been pardoned by former Agong (King) – Sultan Muhammad V of Kelantan.
The “munafiq” (hypocrite) Mr Hadi had also conveniently hidden the fact in the letter that the Muhyiddin’s backdoor government, of which his Islamic party is part of, had willingly worked with Azmin Ali, the traitor who did not only betray his own PKR party, but was also caught with his pants down engaging in “gay sex” at Four Points Sheraton Hotel in Sandakan, Sabah. 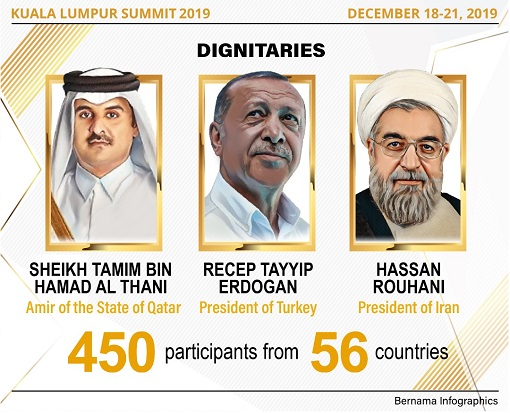 Kuala Lumpur Summit 2019 - Qatar, Turkey and Iran Leaders
However, the not so clever PAS leader did not realize his mistake when he sang songs of praise and worshipped Mahathir in his half-baked letter to the Muslim world. Saudi was furious at Mahathir for trying to use the KL Summit 2019 to boost his image as the champion in the Muslim world, and in the process had invited Saudi’s regional rivals – Iran, Qatar and Turkey.
The Kingdom of Saudi Arabia was offended by the presence of Turkish President Tayyip Erdogan, Iranian President Hassan Rouhani and Qatari Emir Sheikh Tamim at Kuala Lumpur. It was so bad that Mahathir had to cancel a scheduled dialogue session and was forced to hold an urgent video conference – explaining and clarifying to King Salman about the KL Summit.
Saudi, the de-facto leader of OIC (Organization of Islamic Cooperation), was apparently upset that Malaysia tried to replace OIC as the ultimate platform to discuss Muslim issues. After a lengthy lecture by King Salman, who boycotted the KL Summit, the outspoken Mahathir humbly told the monarch that Malaysia was too small to take over the Saudi’s position as the leader of the Muslim world.
The most hilarious part was when silly Hadi used the KL Summit 2019 platform to open his toxic mouth. Not only did the extremist express his strong support for the summit, but stupidly slammed Saudi for its failure to protect Muslims worldwide in its capacity as leader of OIC. Mr Hadi, whose support for the Muslim Brotherhood and Iranian regime is well known, probably thought Saudi was gullible.
It was already bad that he is in the terrorist list of Saudi Arabia. To make matters worse, he is an Iranian hardcore supporter. But the last straw that broke the camel’s back was his reckless condemnation of Saudi in 2019. He thought his lengthy “fairy tale” letter to the Muslim world could divert attention from the fact that he is a terrorist in the Middle East.
But it appears the Muslim world did not buy Hadi’s bullshit story. He still hadn’t figured out that America – even Israel – are close friends of Saudi and its allies. Saudi’s neighbours, Egypt and Jordan, already host Israeli embassies in 1979 and 1994. Last year, Israel established diplomatic relations with four more Arab League countries – Bahrain, the United Arab Emirates (UAE), Sudan and Morocco.
Hadi’s attempt to badmouth Pakatan Harapan (PH), accusing it of working in cahoots with the U.S. and European countries, did not work. Instead, after a year in the government, Saudi still refuses to recognize his credentials. What type of Special Envoy to the Middle East who cannot travel to the Middle East? Here’s the million dollar answer – Hadi Awang. - FT 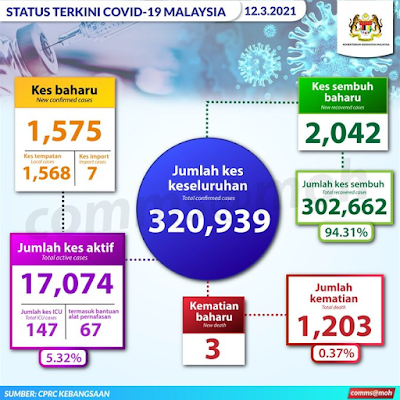