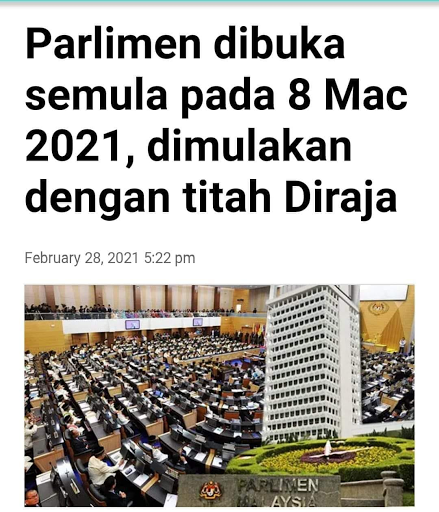 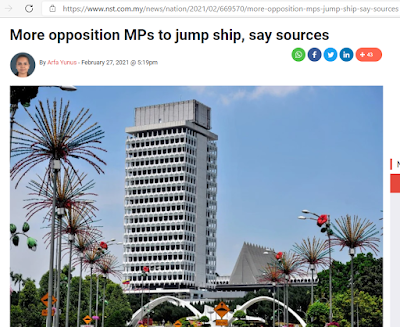 Opposition MPs Jumping Ship...
Just a few weeks back I was discussing this with a PPBM person. The  Emergency ends on August 6th, 2021. I dont think it will be extended. So what happens after August 6th? Does the "lets topple the prime minister" clown act start all over again?  For all you morons out there, please get it through your extremely very thick skulls that Dr Mahathir was not toppled. He R E S I G N E D.  Everyone was taken by surprise. Everyone.
Fast forward - now the morons are saying its ok for them to try and topple the Prime Minister Tan Sri Muhyiddin. If they do it it becomes halal. When Dr Mahathir resigned and left the country in a lurch, and Muhyiddin patched together a coalition - that was not ok? Pi dah mabuk. If you can topple the prime minister go ahead. It is not a crime. Wish you all the best.
But back to the conversation I had a few weeks back. What are the contingency plans for the PN when the Emergency ends in August? Surely there must be Plan A, Plan B and Plan C? And  'Who is playing the role of Genda?' There must be a Genda in the background.
Who was 'Genda'?  Captain Minoru Genda (1904 - 1989) was the master tactician in naval aviation who planned the entire Japanese strike against Pearl Harbour on December 7th, 1941. He was a favorite of Admiral Isoroku Yamamoto. Genda was also present at the Battle of Midway but he was taken ill and could not plan the strike. The Japanese were clobbered at Midway.
Talk is the 'Genda' who is planning the Perikatan Nasional's next moves is none other than Hamzah Zainuddin the Minister of Home Affairs.  If these EIGHT MPs jump ship *2 from PKR and SIX from Warisan' then it is game over. There will be no more talk about "toppling the PM".
The PN will have 111 + 8 = 119 MPs while the Opposition will have 111 - 8 = 103 MPs.   The PN government will stay in power until 2023. 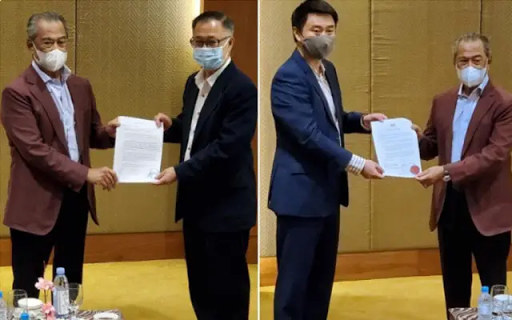 That the two PKR MPs are jumping ship is old news. The 4 to 6 Warisan MPs jumping ship is bigger news. Are they jumping ship with or without Shafie Apdal's consent? I believe when they 'jump' it will be with Shafie Apdal's consent.  We will know if they still remain as Warisan members when they jump ship.
I have long ago heard that Shafie Apdal is a friendly party towards Tan Sri Muhyiddin Yassin. Shafie could yet be the Deputy PM (from Sabah).  Or Shafie may get back Sabah.  And folks, Atok is still in the background.
Come August 6th the lines will get drawn again. Here is my suggestion - form a unity government lah. Why fight? What is the big difference? Umno can work with Pas. Dr Mahathir can work with Mr Lim and the DAP. Dr M can work with Pintu Belakang.
Pintu Belakang was willing to dump all you Pakatan Harapan super morons and work with that naik-tangga-turun-tangga-Mahkamah-Tinggi-87-kali moron. Have you forgotten that? And now there is ample talk of "secret negotiations" between DAP and Umno !!! Even that Pasir Menyalak fellow said it was ok to ponder working with DAP.
Everyone is ready and willing to sleep with everyone else. So why fight? Just go and form a unity government lah. The outcome will still be the same...
Yang bodoh akan tetap bodoh.
Yang kaya akan tetap kaya.
Nothing much will change. - Syed Akbar Ali 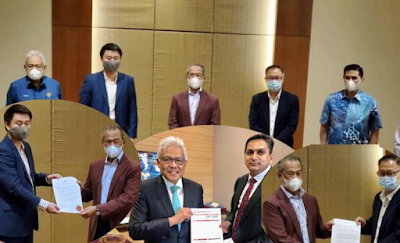 Blackmail, Bribery And Bullying - It's
Working On MPs But What About Angry Voters?...
Malaysia’s missing member for ‘New Zealand North’, Edmund Santhara MP, has reportedly cut a rescue deal with his new mates at PN, specifically Hamzah Zainuddin, Annuar Musa and Azmin Ali.
After a panicked series of calls from Auckland by the party hopping, country swapping Azmin ‘loyalist’ (following our expose of his ‘gone missing’ status) the party has agreed to release a bogus statement on Monday to suggest the ‘frog’ MP has taken a ministerial salary cut during his period of absence since last year.
Constituents should request a copy of Santhara’s bank statements to prove that claim – if come Monday he is still making it.
Meanwhile, the backdoor coup conspirators have been counting on their own weekend distractions to smooth the situation. Swinging Azmin Ali has been pulling out all stops to combat his deficiencies when it comes to working members, splashing money like Viagra to bring the situation up. 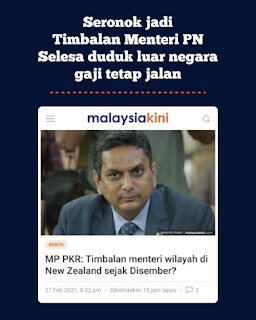 Minister - Missing in action...
Today he put on his latest show of young trophies – a couple of new MPs bought, bullied and blackmailed into deserting their colleagues and their electors and switching sides. Larry Sng and Steven Choong claim to have gone independent, but posed for photos in a line-up with the creepy political swingers from PN on Sunday evening.
The dirty old men are already zeroing in on their next targets using the PN signature sales pitch, comprising legal threats on the one hand and offers of cash injections on the other.
Take Larry Sng, Azmin had abused his office to direct the tax authorities to dredge up what they could to harass the businessman MP with bloated, trumped up demands that would cost him millions to fight. It’s an old BN trick designed to bring anyone with cash in the bank in line.
Consider Mr Sng’s tax worries to be over now. Instead, his businesses will flourish as projects come his way and rich flows of public money will be directed into his Julau constituency to charm and seduce the voters there as well. 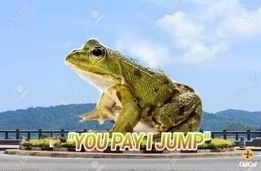 Likewise, all the Sarawak MPs who jumped into PN during the earlier ‘recruitment drive’. They have been explaining openly to their constituents that now their hefty election expenses will be sorted out (from the public purse) and that their areas will now be blessed with ‘projects’ (paid for by the public) to pay off their retinues of hangers on, instead of being starved of funds.
Steven Choong will have his own issues, but the pattern repeats itself with an offer of becoming either the victim of a gross abuse of power (be it criminal charges or financial bullying) or to join the reconstituted political mafia that could not accept its rejection by the voters in 2018.
The remaining question is can this bunch of blatant villains afford to place their wares in front of Malaysia’s voting public ever again?
They may have the money to enrich themselves, which all are plainly doing, and to buy crucial votes to enable them to bring back Parliament. But does the economy they have crippled in the process have enough left in it to buy the angry public who have paid for this little party?
Or does Swinging Azmin Ali plan to abolish elections altogether and just pay his ‘proud boys’ to run the show? - SR 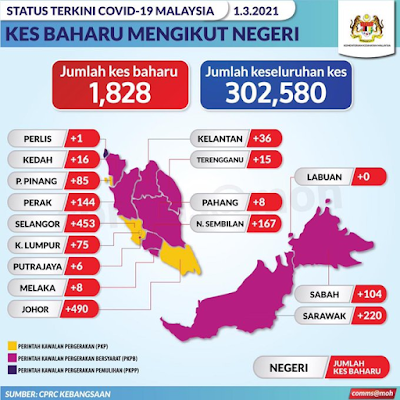