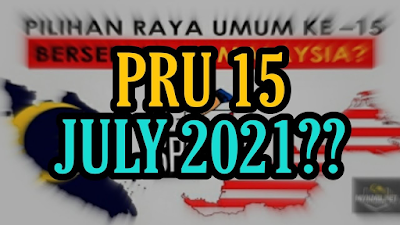 1. Kata Perdana Menteri Pilihan Raya akan diadakan apabila darurat ditamatkan kerana masalah wabak COVID-19 sudah selesai.
2. Muhyiddin percaya Perikatan Nasional (PN) akan menang pilihan raya kerana ia sudah buat persediaan. Bendera dan sepanduk sudah ditempah dan agihan kawasan antara Bersatu, PAS dan UMNO sudah dirunding.
3. Bagi Muhyiddin hanya terdapat satu masalah yang belum diselesai. Muhyiddin berharap tidak ada parti lawan yang akan bertanding. Dengan ini Perikatan Nasional akan menang tanpa bertanding. Baca seterusnya...
IGP Says "YB Menteri tidak tahu"...
It looks like the IGP is on a warpath.  Lets not leave him alone to fight this good fight. Where are the NGOs, the Bar Council, those corruption and crime fighting groups etc? Why are you all keeping silent? Now is the time for all of you to come out in force and support the IGP in this mission.
So again to all you civil society people, the NGOs, the Bar Council, the honest politicians (if there are any), the non-hypocritical politicians (quite the unknown species) now is the time to rally fully behind the IGP and really help him clean up the Police force. Do not sit on your hands doing nothing. Do not miss this opportunity.
There is also something else. If what the IGP says is true (and I have no reason to doubt him) there can be some "repercussions" on all of us.
But before that - the statement by the Minister of Home Affairs Zainuddin Hamzah is very disappointing. Which is why I would advise the Prime Minister to intervene directly.
The IGP says the corruption in the Police is really bad  "mengambil duit daripada bawah, bawa ke atas".  The IGP has also spoken clearly about a plot to topple him and he has strongly alluded to the influence of organised crime organisations in the Police force.
And what did the Home Minister Hamzah Zainuddin say? Hamzah (quite dismissively) told the IGP to take his complaints to the Police Commission (?)
The IGP replied with a polite "YB Menteri tidak tahu".   I find it very difficult to believe that "YB Menteri tidak tahu".
With the IGP's brave exposure those corrupt policemen with links to organised crime may be forced to "lie low".  Especially when the IGP says that "things are under control" and that he knows the names of some of these crooked cops.
What this means is that to avoid getting caught these crooked cops may cut their links to the organised crime fellows. So the organised crime syndicates will be without the protection of their 'Police godfathers'.
The organised crime fellows will not be able to conduct their business as per the normal "mengambil duit daripada bawah, bawa ke atas". 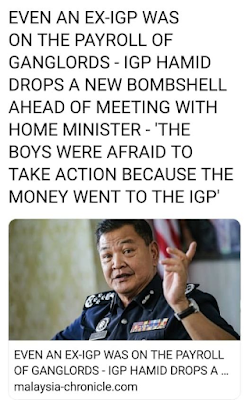 They will be left to fend for themselves on the streets. My prediction is minus the protection of the crooked cops, turf wars and gang wars will soon begin among these crime syndicates. It will be "dog eat dog" soon.
The IGP should be ready for this possibility as well. Even street crime may increase. Which will have bad consequences for the government of the day.
So NGOs, Bar Council, civil society groups, Church groups, Islamic organisations now is the time to speak up. Show your support for the IGP. 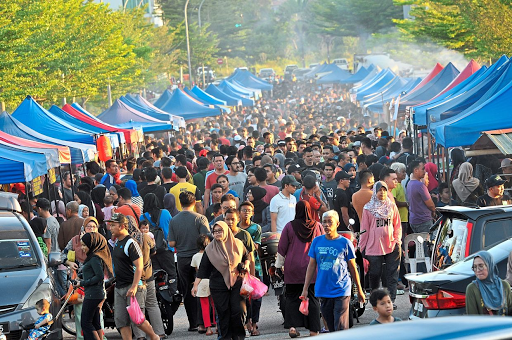 Bazar Ramadan Issue...
The Bazar Ramadan issue has cropped up again in KL. The issue went dead for a very short time. Now it is back. The Bazar Ramadan has always been associated with corruption - plain and simple.
Just for your information, two Ministers who  were involved in the affairs of the Wilayah Persekutuan in the past (as Ministers) have now been charged in Court with corruption. Doraemon and Tengku Mamak. Their corruption charges have nothing to do with the Bazar Ramadan but n'theless both these ex-Ministers were once responsible for Wilayah Persekutuan matters.
And under their respective watches there were even arrests over the Bazar Ramadan corruption. The point I am trying to make is that all these "dari dulu" type of corruption always has politicians involved - and they usually get away scot free.
Without corrupt politicians the corruption cannot go on for so long.  As long as the politicians are corrupted then that is how long the government departments and government agencies will be corrupted.- Syed Akbar Ali 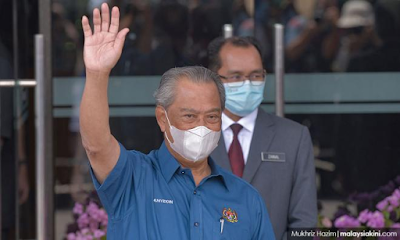 Attempted assassination of PM,Minister,
Why did Muhyiddin not inform, asked PH...
Pakatan Harapan’s presidential council is taking Prime Minister Muhyiddin Yassin to task for supposedly failing to inform the cabinet of a terrorist threat against senior government officials in January 2020.
This came after Bukit Aman Special Branch (E8) assistant director Azman Omar revealed that police had foiled an Islamic State (IS) supporter’s plot to attack the then prime minister Dr Mahathir Mohamad, finance minister Lim Guan Eng, religious affairs minister Mujahid Yusof Rawa, and attorney-general Tommy Thomas. Muhyiddin was the home minister at the time.
“The presidential council wishes to convey its utmost thanks to the police for its stern action in foiling the attempt. 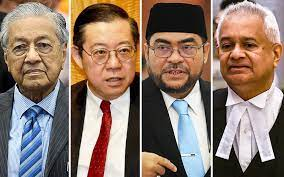 “At the same time, we regret Muhyiddin’s attitude, who was home minister at the time, in failing to inform this to Harapan leaders and the people in general.
“This failure raises questions on the motive behind concealing this issue from the affected leaders and the Harapan government," it said in a statement tonight.
“Therefore, we urge Muhyiddin to explain this matter immediately,” it added. 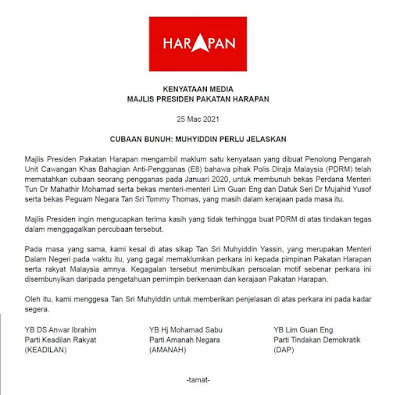 The statement was jointly issued by PKR president Anwar Ibrahim, Amanah president Mohamad Sabu, and Lim who is also the DAP secretary-general.
Azman, at a roundtable discussion earlier, said police had arrested six people from Jan 6 to Jan 7, 2020, following their involvement in making IS propaganda videos and death threats against the country’s leaders.
During investigations, one of them admitted he intended to launch a lone wolf attack against several government leaders by stabbing them with a knife or sharp object as a sign of support for IS. - mk 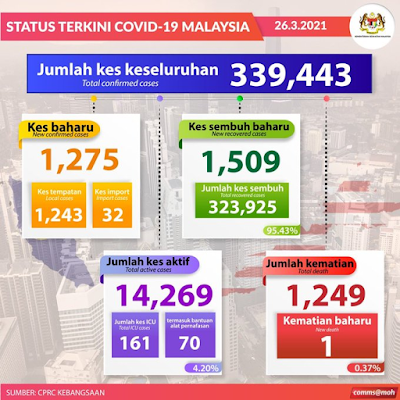