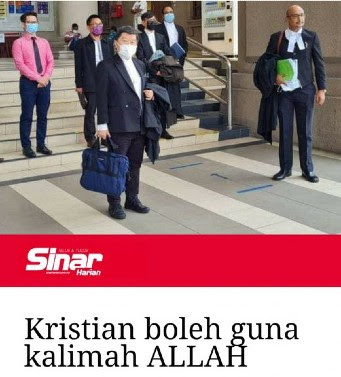 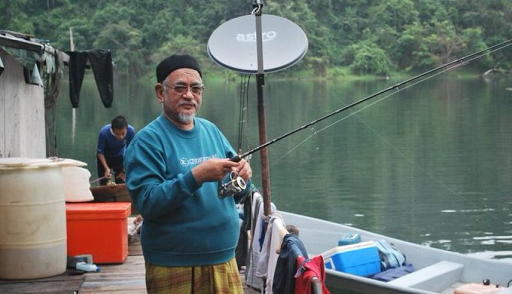 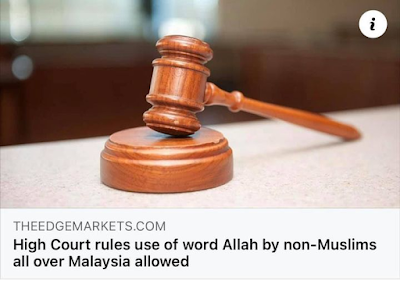 The High Court has ruled that the use of the word Allah by non-Muslims all over Malaysia is allowed. In addition, other prohibited words such as Baitullah, Kaabah and solat, which were banned by the Cabinet in 1986, could also be used by the community for teaching purposes as they have been in use in Sabah and Sarawak and some parts of Peninsular Malaysia for more than 400 years.
This follows Court of Appeal Justice Datuk Nor Bee Ariffin, sitting as the High Court judge, in allowing the judicial review by Sarawak Melanau clerk Jill Ireland, and ruling that the directive by the Home Ministry not to allow the use of the four prohibited words, including Allah, is filled with illegality and irrationality.
With this, she allowed Ireland's declaration and ruled that the use of the words would not disrupt public order. Ireland was challenging a ban on the use of the word Allah, which resulted in eight CD items she brought in from Indonesia 13 years ago to be confiscated at the Low Cost Carrier Terminal (LCCT) as they bore those words.
Although the CDs had been returned, she went ahead with the judicial challenge that included a challenge of a circular issued by the Home Ministry over a total ban of the use of the four words — Allah, Baitullah, solat and Kaabah — unless there was a written word Christian published in front. 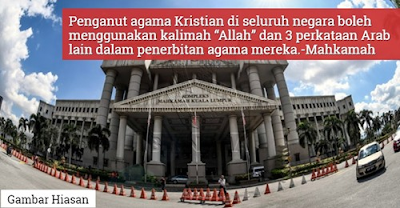 In her decision, Justice Nor Bee ruled that the circular issued following the 1986 Cabinet directive is null and void. She finds the circular, which was signed by a Home Ministry officer and not a minister, provided a blanket ban over the use of the four words, which was not the directive's intention.
"The directive on the prohibition that it would result in a threat in public order is not supported. In fact, the directive is deemed irrational and perverse," she said.
She said the Publication and Printing Presses Act 1987 (PPPA) is there to check on undesirable publications and not for the purpose of maintaining public order, morality or health.
"If the minister (then Datuk Seri Syed Hamid Albar) does not follow the law regulating the exercise of his power, then he has acted illegally, as he has gone beyond the limit of his power. The minister must understand the law. If the minister does not follow the law, he has acted illegally. In the present case, the minister has not acted according to the act (PPPA).
"The impugned directive (blanket ban circular) cannot be considered to be a subsidiary legislation," Nor Bee ruled.
After deliberating over the issue — which also touches on freedom of religion — for more than one-and-a-half hours, Justice Nor Bee subsequently allowed three declaratory relief sought by Ireland. - theedgemarkets 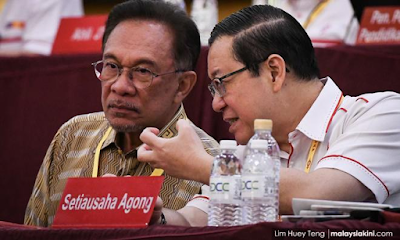 The 15th General Election,
an UMNO-PH breakthrough?...
The perceived wisdom now prevailing is that the next general election will bring no dominant party into power, hence political instability will continue. In that scenario, party-hopping will be rampant, and there will be no time left for governing the country. Imbued with the shenanigans of the present crop of leaders, it is no wonder that people are getting frustrated, cynical and pessimistic about the political process. It does not have to be that way.
Pakatan Harapan's clear victory in 2018 was premised on the simple idea that the sizeable bloc held by Anwar Ibrahim-DAP just needed a Malay leader of influence to bring them across the line.
It was a profitable venture because Dr Mahathir Mohamad was prepared to join them, not out of love for the progressive forces in the country, but because he wanted to defeat Najib Abdul Razak.
The mistake of Harapan leaders was plain to see. Having won the election, they allowed Mahathir time to derail Harapan and Anwar. All because they failed to see the clear signs before them (cabinet position can affect your vision) that Mahathir was not interested in making Harapan a success. Many believe that the “Sheraton Move” was his idea from start to finish. 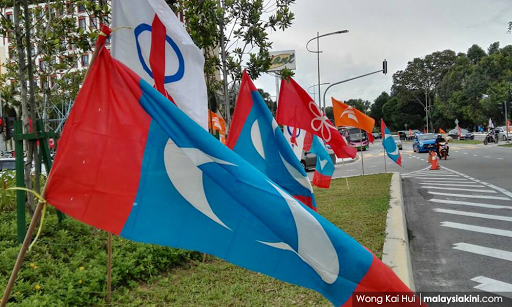 The Anwar-DAP pact needs to work closely with another set of Malay leaders with influence. The best available for them is to work with Umno. Umno has leaders with the ability to influence Malay voters and together, a PKR-Umno pact will bring in the largest number of seats since the good old days of BN dominance. This will bring stability to the country, and many good things can be done with a stable government. But who will be the prime minister?
This issue should not be placed at the forefront, and I don't think it is difficult to resolve. It is either Anwar or a nominee from Umno, and the number of seats obtained by each grouping will have a bearing on the decision of who helms the top post. The definitive moment in Anwar's political career.
The main hindrance to successfully implementing this simple plan comes from factions within PKR and Umno. From Anwar's camp, you will have voices objecting to the plan because they do not see Umno as a progressive force that will bring reforms to the institutions and fight corruption. They will cite the cases of Umno leaders before the courts.
My response is this: Anwar as a leader must make this call. It will be the definitive moment of his career. Umno has to be the working partner for PKR. Tell the cynics that almost all leaders from all the parties in this country have taken some pecuniary advantage from their political positions.
Unfortunately, not all have faced prosecutions because prosecutions are usually reserved for those who do not support the incumbents. The unfair use of government agencies to pressure political opponents is another reason why some politicians are seen as clean, and others as corrupt.
Let us not fight one another on the basis of what happened in the past. Abandon the arrogance that one is cleaner or more honourable than the other. A “holier than thou” attitude will not bring political stability. It will prevent good leaders from taking power, for they are in the best position to change the country. 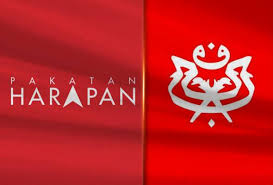 What is essential, for a start, is for PKR and Umno to agree on crucial institutional reforms such as the police oversight commission, changes to MACC and to have greater scrutiny over the appointment of key positions like the attorney-general, Bank Negara governor and Dewan Rakyat speaker.
Umno leaders will agree to these reforms because they have, for the first time in their history, been subject to unfair treatment from those in power. They, like Anwar, will want changes so that the practice of using political power to annihilate opponents will come to an end.
There are some in Umno who think that Anwar-DAP is political anathema. They will not do a deal with the forces considered as too liberal and friendly with the non-Malays. I will not worry too much about them. Their thinking is outdated.
Malays want empowerment. Malay political power is a given since they form the majority of the voters. What Malays crave for now is not political power of the type they had in the last 60 years. The Malays want empowerment.  Where are the Malays now compared to the other races? Have they built Malaysia the way the Chinese built Singapore? Not at all. The process must begin now.
What we need is a good government with sound policies that will empower the Malays and other Malaysians, so the country can be great. Identity politics, they say, is alive and well. If that is true, it is because we make no attempt to give a new narrative, one that makes them relevant in this new world. We need a policy that empowers the people, not their identity. An Umno-PKR alliance will be the first step in this direction. 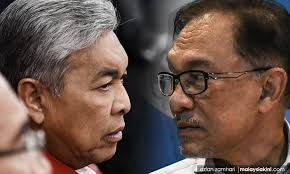 Many hawks in Umno are already supporting the Bersatu-PAS alliance to preserve the so-called Malay/Islamic dominance. Let them continue. However, there are many Umno leaders who are pragmatists. They are secured because Umno's brand as the defender of bumiputera rights cannot be disputed. No right-thinking Malay will accuse them of treachery if they embark on reforms relevant to the needs of the country.
Umno does not need PAS as an ally (unless they are forced to). Umno is committed to developing the country and its economy and providing better livelihood to the people. PAS' interests lie somewhere else.
Umno needs allies not only to secure a significant workable majority, but also because it knows that the country has to be run and managed by competent leaders of different nationalities and outlook. Otherwise, the country will be left far behind.
It is time for leaders to be practical and cease indulging in hyperbole and fantasy. Those who wish to see real reforms must be willing to work with Malay political groupings of influence. Otherwise, reforms will fail again.
Umno, too, must stop believing in its own propaganda that Anwar and DAP are enemies of the people. The ghost of the past must be laid to rest - and only then can new dreams take hold. - Zaid Ibrahim,mk 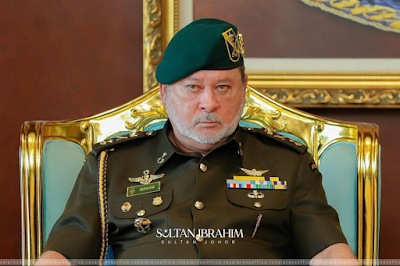 Tuanku's face tells all....
The Sultan Ibrahim Solar Park
project cancelled...
The official ground-breaking ceremony for the Sultan Ibrahim Solar Park project in Pengerang, which was initially scheduled to be officiated by HM The Sultan of Johor, Sultan Ibrahim Ibni Almarhum Sultan Iskandar on 23rd March, has been cancelled. The decision was made as the Federal Government has yet to give any response with regards to the proposed project.
His Majesty had last week announced that Johor will become a leading producer of renewable clean energy with the commissioning of the power plant by 2023.The RM1.4 billion development is Johor’s first foray into large-scale sustainable energy production with a combined installed capacity of 450MW (megawatts) - the biggest in Southeast Asia.
It is also Johor’s first major private investment in 2021 and is the result of HM Sultan Ibrahim’s continued efforts to draw investment and development to boost the socio-economic wellbeing of the people in the state. The project is also in line with the 2030 Johor Sustainable Development Plan which places major emphasis on environmental preservation and protection as part of the state’s economic development plan for a more prosperous society.
It will also have a positive economic spillover effect for the state, with job creation at various levels, as the solar park will be the region’s largest solar energy storage system when fully operational.
“I don’t see any reason why the Federal Government would not be willing to give Johor a chance to be an eco-friendly producer of electricity. We have a suitable plot for the project, robust growth and development, as well as a healthy demand from our neighbour, which makes Johor a most strategic location,” said His Majesty. - Johore Today 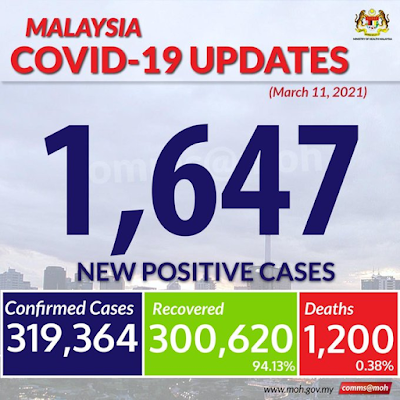