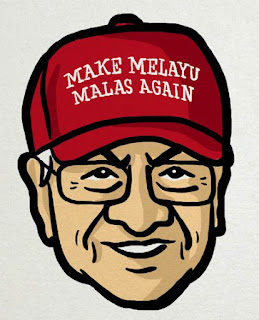 Silly Mahathir has spoken again. The 94-year-old Prime Minister of Malaysia has again mocked and insulted his own community – ethnic Malays – for being lazy (*yawn*). Yes, it’s quite silly repeating the mantra again and again about a disease which he knew how to cure but refuses to prescribe. If he cures the disease, the Malays will be too smart for him to control.

Sharing some of his historical observations, Mr. Mahathir wrote on his blog that when the British colonist opened rubber estates and tin mines, no Malay was interested to work there. The local Malays had chosen instead to continue being rice farmers and fishermen, while a small number worked in the civil service as clerks. They were proud of earning a fixed salary and pension.

The premier said that the Malays looked down on jobs in the mining and plantation sectors as it required hard labour and were considered dangerous, dirty and difficult. As a result, the British had no choice but to bring in workers from China and India. The Malays were relief and happy that the 3Ds jobs – dangerous, dirty and difficult – were undertaken by foreigners.

The hiring of Chinese and Hindus saw a sudden booming of business in the cities. Mahathir recalled – “Due to their attitude, there were not many Malays living in the city. At that time the cities were developed and filled with Chinese grocery shops and all kinds of handyman. There was no Malay working as hard labour, let alone Malay businessmen. There were only a few Indian restaurants and spice shops.”

PM Mahathir’s remark is an indirect confession that without the Chinese and Indians, Malaysia’s landscape today might be very different. The country might look like the state of Kelantan at worst, or Brunei at best. But we know oil-rich Brunei has only 500,000 mouths to feed while Malaysia has more than 16-million Malays. So it’s an overstatement to say Malaysia could be like Brunei.

Despite being called a “coolie”, the ethnic Chinese were willing to take on 3Ds jobs. Even Chinese women worked as maids or nannies in the households of Malay nobles during the British era, says Mahathir. In his message to fellow Malays, the world’s oldest prime minister said the Chinese would normally migrate to any country if they find opportunities to make a living.

He also revealed that in his younger days in Alor Star during the British rule, there was a desire to see Malays doing business and thus Pekan Rabu was built to enable villagers to sell some bananas, other fruits and baskets made by them. However, Mahathir said – “Their business did not become big. They traded part time. They did not have the desire to expand their business, just to eke out a living, that’s it.”

Mahathir slammed the Malays for not only being choosy in their jobs, but also not bothered at all by the wealth and progress made by the foreigners. He wrote – “Their belief was that their state remains under their ownership. That was what I saw … but their thinking was wrong. Because they were not willing to work hard, to do business seriously, they remained poor.”

“The gap between them and other races that worked hard and did business became wider. What happened was the rich became richer and the poor Malays became poorer. By right the Malays should realise what is happening to them. Unfortunately, they have not realised. Even until now Malays have not woken up. They still refuse to work,” – complained Mahathir.

“The Malays are still willing to surrender all work to foreigners. And foreigners have flooded our country. Seven million foreigners are still here. They work. What will happen to the Malays? Obviously, what had happened to the Malays and the country in the past will continue to happen,” – Mahathir continued his lengthy lecture on his blog.

The premier said – “There are some who claim that Malays are the master. What master? Poor people, people who lack capability, people who depend on the sympathy of other people. Is that master? Our fate is in our own hands. Getting angry with other people will not solve our problems. Our number is said to have increased, but a big number of poor people cannot compete with a small number of rich people.”

So, what are the messages that Mahathir wanted to send across with his latest babbling and bitching, besides his penchant for mocking the Malays as being lazy, depend on crutches, “syiok sendiri” (self-absorbed), inferior, dishonest, untrustworthy, corrupt and whatnot? Actually, this is not the first time he wanted the Malays to wake up from their slumber land.

The long and short message was to tell the Malay folks to forget about boycotting non-Muslim products, at least for now, because it would fail. That was why the old man said it’s useless to get angry with other people, presumably the minorities Chinese and Hindus, to the extent of starting a boycott campaign on non-Muslim products. Why?

Mahathir’s lecture reveals the basic foundation as to how his community can become a force to be reckoned with. If the Malays were not willing to work in 3Ds jobs like those in mining, plantation or construction sector, exactly how can they succeed in more complicated jobs like running a business? Can they work 7 days a week for 12 hours a day like the Chinese-owned grocery stores?

Some might argue why didn’t Mahathir tell the ethnic Chinese to work in such hard laboured industry too, and only discriminate against the ethnic Malay? Actually, as highlighted by Mahathir, the first generation of Chinese coming to what was known as Malaya back then had done precisely that, and they’ve now moved into the next phase of business.

Today, you don’t see Chinese men working as coolies in mining or construction sites, or Chinese women working as maids in Najib Razak’s house anymore. They had gone past that stage. Now, they would hire foreign labours to do the 3Ds jobs that their ancestors once did. They would also pay the Filipinos or Indonesians as maids to do house chores and take care of their kids.

That’s exactly why Mahathir was incredibly concerned because the 7-million foreigners – Indonesians, Bangladeshi, Burmese, Pakistanis, etc. – are repeating the history of the Chinese immigrants during the British era. If you care to look around, the Burmese is learning – even taking over – some of Chinese businesses at food stalls and grocery stores.

Yes, as the Malays still scream of “ketuanan Melayu”, the ideology of Malay supremacy espoused by the United Malays National Organization (UMNO), even their hardworking “brothers” from Indonesia are snatching jobs opportunity which the Malays considered as low-class. Heck, some Bangladeshi and Pakistanis have actually graduated to selling IT gadgets or repairing computers.

As the Chinese business owners fast climb up the value chain from their original role in managing, replicating and innovating business, cheap foreign workers were imported to do all the heavy lifting and dirty tasks. As described by Mahathir, the Malays are still proud – even desperate – of working in the civil service where they can earn a fixed salary and pension.

Everything is interrelated. If you don’t work hard, you don’t appreciate hard-earned money. And when you don’t value hard-earned money, you will tend to dishonour business agreement. And when you lack honesty, you can’t expect suppliers to give you credit terms simply because you’re untrustworthy. Trade credit is vital to ease cash flow, which can help improve a small business’s profitability.

Most Malays would complain that they lack capital to start a business. So the government gives them easy loans. However, the same group of Malay businessmen would more often than not use the easy money to buy a new car, get a nice office, renovate own house – even marry a new wife – before their business could even make any profit. To them, style (“gaya”) must come first.

Worse, when they earned some profits, they refused to pay their creditors or suppliers. They would celebrate with a bigger car and a nicer office or sexier furniture. They buy more debts and liabilities. Naturally, their credit terms would be terminated and any new product purchases have to be paid upfront. Their business would eventually go bust because they can’t roll over their business.

More importantly, not only certain groups of Malays are filled with anger and envy towards the Chinese for their successes, they also feel jealous of fellow Malays’ achievement in business. Spiteful jealousy exists within the Malay community for as long as one can remember, as admitted by former Deputy Prime Minister Ahmad Zahid Hamidi in 2015.

Instead of helping each other to build a formidable network of supply chain and ecosystem like the ethnic Chinese, most short-sighted Malays would rather destroy fellow Malay business rivals – cutting off the nose to spite the face. Lack of competition breeds complacency and inefficiency. More players will create awareness of new products and increase consumers’ consumption.

So when Mahathir said the Malay community is a big number of poor people, but cannot compete with a small number of rich people, he was saying the majority ethnic Malays have chosen the easy way out to become consumers while the hardworking minority Chinese become the producers and suppliers. There’s one thing that the premier didn’t tell the Malays.

The Chinese can certainly profit from poor Malays. But they can profit even more if the Malays are rich or business-savvy. How? The current Chinese-Malay situation is like the relationship between China and Malaysia. But a very rich and business-savvy Malay community will create a relationship like China-US (before the trade war started).

Hence, it’s not true that the minority Chinese hate to see the Malays become successful. When the Malays become rich, they create a huge pool of customers with incredible buying power. Can you imagine the type of economic impact when 16-million rich Malays like the American consumers splash money for products at Chinese shops?

Do you think the Malays will still shout about boycotting non-Muslim products when they’re as rich as the Americans or Singaporeans? They would have created their own ecosystem by then. But first, the Malays need to get out of the cocoon of demanding handouts from the government and start working hard like a coolie. There’s no shortcut to success except hard work.

Dr. Mahathir’s prescription to fix the Malay’s laziness is not to help them at all. But that would mean a political suicide for the old man. After 62 years, the Malays are too addicted to special rights, privileges and handouts. That’s why the premier can only moan, whine and bitch about Malays being lazy and choosy of jobs. He can never give the medicine to cure the disease.

However, get ready for any new surprise from the cunning old fox. His grumbling drama could be his evil plan to justify giving more handouts or crutches to the Malays to win their support. There could be a plan to introduce a newer NEP (New Economic Policy), the discrimination and racist policy which officially ended in 1991 but restructured as NDP (national development policy). - FT 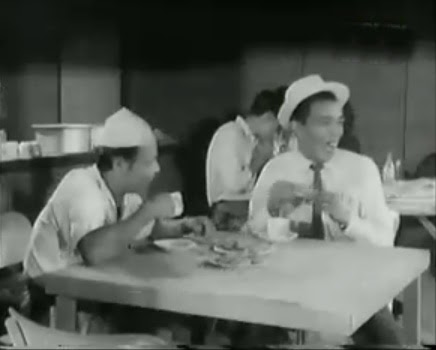 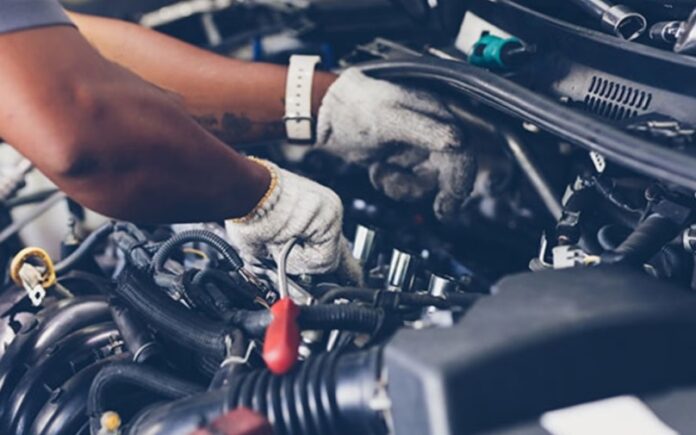 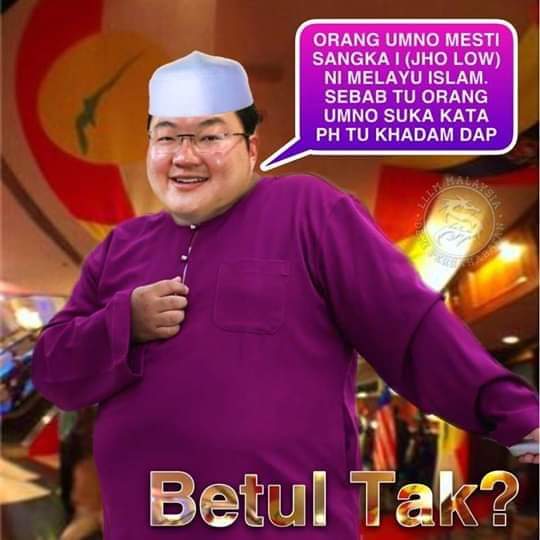 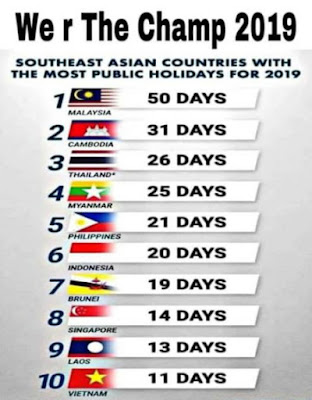