Johor can't secede but TMJ can test it in court...

He said this in response to Johor crown prince Tunku Ismail Sultan Ibrahim (photo,above) who in an interview with sports publication Fourth Official claimed the state can secede if the terms set out when it joined the federation was breached.

"The prince should not view the agreement between Johor and other states as private agreements between individuals.

"Some have said there is a right to enter federation but unfortunately the same cannot be said about leaving.

"In any case the prince can put up a claim in the court and see what the judges have to say about it rather than barking the one and same thing again and again," said Aziz who is attached to Universiti Selangor (Unisel).

He added that the only way for a state to exit the federation is through expulsion in Parliament.

Right to equality under constitution

Aziz also indicated that the prince may be subjected to the Sedition Act if he called for secession.
"I am not particularly fond of sedition but if one keeps talking about secession then the police better do something about it.

"Under the constitution there is a right to equality and certain Sabahans and Sarawakians have incurred the wrath of the law for saying the same thing," said Aziz (photo).

He said the Johor crown prince should be mindful of the provision of both the federal and state constitutions, pointing out that some states have sacrificed more or had a stronger claim to more rights.

"He must be aware that the so-called rights of Johor are also available to other states; especially Sabah and Sarawak which have bigger rights and autonomy.

"Selangor and Sabah have given more; the former gave KL and Putrajaya while Sabah surrendered Labuan," he said. - mk

Johor crown prince Tunku Ismail Sultan Ibrahim has warned that the state has every right to secede from the country if any of the terms in the agreement between Johor and the Federation of Malaya are breached.

In an interview with sports website FourthOfficial.com, the crown prince said that his views might be seen as instigating state-based sentiments, but his main concern was the people of Johor.

"I am going to be the future Sultan of this state and my main responsibility is towards the people of Johor. Malaysia is important to me, but Johor and JDT will always come first," he was quoted as saying. Continue reading...

Constitutional experts are of different opinions on whether Johor has the right to secede from Malaysia as was claimed by Johor Crown Prince Tunku Ismail Ibrahim today.

Bar Council's National Young Lawyers Committee co-chairperson Syahredzan Johan said Tunku Ismail was merely stating his personal opinion, and as such his statement on Johor seceding from Malaysia could not be deemed as seditious.

“His remark is not seditious. He is stating an opinion and his opinion cannot be regarded as seditious,” Syahredzan told Berita Daily.

“Whether it is correct or wrong, that is a separate matter. That is the problem with the Sedition Act, it is so vague and so wide,” Syahredzan explained.

Earlier today, the 31-year-old Tunku Ismail broached on the possibility of the state breaking away from Malaysia if terms of it joining the federation were broken.

“Over the years, we’ve always been strong and independent as well as resourceful.

“In fact, we only joined the Federation of Malaya upon both parties agreeing to several basic terms.

“And if any one of those terms are breached, we have every right to secede from this country,” said Tunku Ismail in an interview with sports portal fourthofficial.com.

Although the interview was on his role and influence in making Johor a footballing power house in Malaysia, the question of Johor seceding from Malaysia came when he was asked on his state-based sentiments that could create a divide on the national scale.

“I am going to be the future Sultan of this state and my main responsibility goes towards the people of Johor. Malaysia is important to me, but Johor and JDT (Johor football team) will always come first.

“People deserve to know, that the mess we have in the country right now, should in no way be associated to the Johor royal family.

“You can accuse me of instigating state-based sentiments, but to me, I’m merely doing my duty to the people of Johor, and reminding them of the history and heritage behind this great land,” said the prince who is known for his frank views.

However, Universiti Teknologi Mara (UiTM) Emeritus Professor of Law Prof Dr Shad Saleem Faruqi told Berita Daily that there was no state in Malaysia that could secede from the federation as every state falls under the territory of Malaysia following the Independence in 1957, and then the formation of Malaysia in 1963.

The constitutional expert added that Tunku Ismail should have not made such a remark, adding that it was seditious for one to call for a secession.

“It is stated clearly under Article 1, clause 2 of the Federal Constitution. No state has the right to break away from Malaysia under the constitution. You cannot simply withdraw from the federation. In fact you cannot.

“The Crown Prince should not have said it. Calling to secede is an offence and it falls under the Sedition Act,” the law expert said.

Earlier this year, Tunku Ismail's younger brother Tunku Idris Ibrahim first raised the issue of seceding by posting of an image of Johor state’s agreement with the Federation of Tanah Melayu.

The 1946 agreement, signed by the late Sultan Abu Bakar, stated that the agreement was inked after several conditions set by the state government.

The agreement also stated that Johor will leave Malaysia if any of its conditions are not met.

Among the conditions are Islam as the official religion of the state, land and water being the absolute right of the Johor government and no interference in its state laws.

Tunku Idris' reminder of the agreement came about following a public spat between Tunku Ismail and Culture and Tourism Minister Nazri Aziz over the Crown Prince's remarks about Prime Minister Najib Razak avoiding a public forum to explain the 1MDB scandal.

Constitution experts meanwhile argued that the agreement between Johor and Federation of Tanah Melayu has become null and void after Merdeka.

Similar calls for secession of Sabah from Malaysia have resulted in the arrest of several Sabah activists for sedition.

Another activist, Doris Jones, is wanted by the police over her calls for an independent Sabah. She is now rendered stateless in London after the Malaysian government refused to renew her expired passport. - beritadaily

An independent Johor would be an economic powerhouse 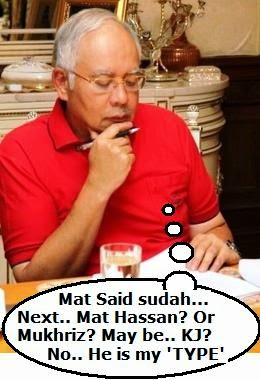 No-confidence vote against PM a tough one...

It will be difficult to pull off a no-confidence vote against Prime Minister Najib Abdul Razak in the coming Parliament sitting, which starts next Monday, said PKR vice-president Rafizi Ramli.

Therefore, the Pandan lawmaker said the public needs to "re-calibrate their expectations" and not blame the opposition if it does not materialise.

"My fear is that we have to re-calibrate the public's expectations, because I don’t think the public understands the standing order," he told reporters at the party headquarters in Kuala Lumpur today.

Rafizi explained that the process of a motion to table a vote of no-confidence in this country would have to go through the speaker, who would then refer it to the prime minister.

He noted that a vote of no-confidence which the public is used to in other countries is "near impossible" in Malaysia and so they have to be realistic in their expectations.

"My worry is that if the public doesn't understand the rules of Parliament, they might say that the opposition has lied to them," he said.

However, this does not mean the opposition will still not try to force Najib to step down, Rafizi said.

"My opinion is that this has always been our attitude as activists.

"Something that is difficult but is right, you still have to push but then you have to be realistic of the outcome," he said.

Another possible way is for the opposition to defeat a bill tabled by Najib, he added, because it can be taken to mean that the prime minister has lost the confidence of the majority.

The next major bill will be the Budget 2016, he pointed out, and Najib will be expecting the opposition to try its best to defeat that bill.

"He will try his best to make sure that every single BN MP will be there so I think there will be a heightened sense of intimidation from BN," he said.

The opposition will try any method to take Najib down, said Rafizi.

"The one in control is Najib and the speaker so therefore we have to be a little realistic about it," he noted.

He said Najib would ensure the presence of all Barisan Nasional MPs on the day of voting if the Speaker allowed the motion of no-confidence to go through.


The opposition has been talking about tabling a motion of no-confidence vote for months now, though it has been a lot more coy about whether it will actually do it. - mk