Why is A-G Gani Patail afraid to go to trial against Rosli Dahlan...

This morning the Court of Appeal dismissed the appeal by Attorney-General Gani Patail and 10 others  against Lawyer Rosli Dahlan(below). The Court of Appeal found that the A-G’s appeal had no merits. For full reports on this, read here and here.

Previously, all the major newspapers  which were sued by Rosli had either apologised to him or were found liable by the Courts. The New Straits Times and Malaysian Anti-Corruption Commission (MACC) were found guilty for defamation and were ordered to pay RM300,000.

What the lay public may not be aware is that all these appeals by A-G Gani Patail are merely tactical moves‎ called interlocutory applications to stall the trial. In a connected case filed in 2009 where Rosli sued the MACC Chief Commissioner and its officers, the MACC represented by the A-G’s  Chambers also avoided going to trial by striking out Rosli’s suit twice. Rosli appealed and the case was restored.

Tan Sri Cecil(below) is a very expensive lawyer. He is the same lawyer implicated in the PI Bala Statutory Cecil AbrahamDeclaration case which the Bar Council is taking disciplinary action against. Another senior lawyer that the Bar Council is considering taking disciplinary action against is Tan Sri Shafee Abdullah who prosecuted Anwar Ibrahim’s appeal. It seems that A-G Gani Patail will appoint Shafee for difficult criminal cases and Cecil for difficult civil cases.

We the taxpayers can ask what is the point of having Gani as A-G then? But the more stark observation is why is the A-G, the MACC and the government being represented by lawyers who are the subject of disciplinary issues?

When a government agency like the MACC preaches about integrity, honesty and transparency, should not the government’s advisers and legal representatives also be of unquestionable character? That is an observation that most people have made and I am just voicing it out for our government leadership to ponder.

Coming back to the A-G’s  appeal that was dismissed this morning , the news reports also stated that cost of RM25,000 was ordered against the A-G. This seems like a strong rebuke by the Court of Appeal judges against the A-G for  hiring an external lawyer to defend him. What taxpayers want to know is  how much is Cecil being paid and whether A-G Gani Patail is footing the bill himself or whether the government, meaning us taxpayers, is underwriting the A-G’s legal cost?

If the AG-C had acted for them it would have been free, but I can’t imagine Cecil doing pro bono work for the government. Or is there some tradeoff where Cecil Abraham gets other government legal work at inflated fees. Is that not gratification? The MACC should investigate this.

The news reports also stated that Cecil asked the Court of Appeal to stay the proceedings and change the trial Judge at the High Court. Isn’t that an insult to the judicial system when the A-G himself is suggesting that the judge is not impartial?  We see private litigants saying that. But is it appropriate for the A-G to take that stand?

Against the accusation by Cecil Abraham against the trial judge, the Court of Appeal Judges namely Hamid  Sultan Abu Backer, George  Varghese and Vernon Ong  stated almost rebukingly to Cecil  that they had subjected the trial judge’s grounds of judgement to an acid test and found it to be reasonable.

I think it is terrible for Cecil to ask for a change of Judge just because the judge had ruled that A-G Gani Patail and other public authorities do not enjoy absolute immunity when they act maliciously against a private citizen. It seems to suggest that A-G Gani Patail will only accept if judges rule in his favor but will not accept when judges rule against him like in this case by Lawyer Rosli.

I think the A-G being part of the judicial and legal service is undermining respect for the service by such actions. Not to mention he doesn’t trust the very department that he heads to defend him!

That brings me to the point of this whole exercise by the A-G– why is Gani Patail  afraid to go to trial against Lawyer Rosli Dahlan?

When the Sodomy 2 charges were made against Anwar Ibrahim, the governmeny accused Anwar of being afraid to go to trial to prove his innocence just because  Anwar filed interlocutory applications. The AG-C and UMNO accused Anwar of delaying tactics and then rationalised that to mean that Anwar is guilty. Such easy deductions.

Or is there something more that the A-G is fearful about  that will be disclosed in the trial – for example, Rosli’s allegations that Musa Hassan was working with the gambling syndicate or that Gani had consorted with questionable characters like Shahidan Shafee during Haj trips like how former Eusofe Chin went on holiday in New Zealand with VK Linggam?

There may be explosive revelations during the trial beginning April 6 before Judge Su Geok Yam where Rosli has sued the MACC and its officers for conspiracy to injure him. Perhaps A-G Gani Patail is afraid that the conspiracy will be revealed especially since all the newspapers have admitted that they were fed information by sources within MACC.

Perhaps that is the reason A-G Gani Patail has engaged Cecil Abraham to block the trial from proceeding. There are just too many possibilities merely because the delaying tactics by A-G Gani Patail is perplexing.

I say to Gani Patail – stop all these tricks! Go to trial and prove your innocence. Don’t hide behind the cloak of immunity. Be a gentleman, fight fair and square. After all what is there to fear? Rosli is just a private lawyer without any political patronage nor any godfather backing him. He has faithfully fought all his legal  battles within the system and therefore Gani should face him squarely in court.

I say to all Malaysians let us pray for Rosli that he will get the justice that he deserves. In the face of the might of the whole establishment, he has stood unwaveringly by his faith and he has given us hope by the small victories that he has achieved thus far. The machinations by men cannot overcome the will of God.  Man proposes but God disposes.  Let us pray for Rosli on April 6 until the conclusion of his trial - dinmerican 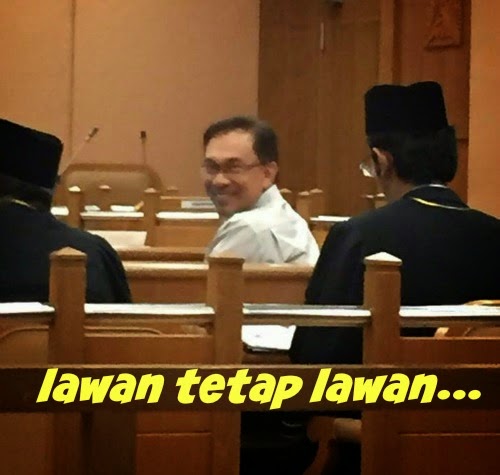