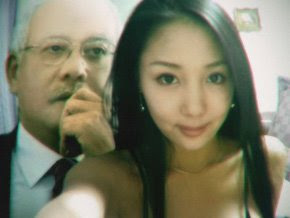 Four private television stations have been ordered not to name political analyst Abdul Razak Baginda when reporting the Altantuya Shaarriibuu murder case. Malaysiakini has learnt that the top management of Media Prima Berhad - the owner of the four TV stations - had issued a directive on the matter. The media giant, which is believed to be linked to ruling party Umno, controls the country’s four free-to-air private TV stations - TV3, ntv7, 8TV and tv9.

The directive was part of an email sent on behalf of the group director of news and current affairs, television networks, Kamarulzaman Zainal. Kamarulzaman was press secretary to Abdullah Ahamd Badawi when the former premier was deputy PM. He was appointed to helm Media Prima soon after Abdullah took power in 2003. The email listed four ‘don’ts’ involving news reports relating to the high-profile murder case of Mongolia national Altantuya, who was mistress of Razak Baginda (left).

The TV stations were ordered not to mention Razak Baginda's name and ignore all news background related to him.

Editors were instead told to focus their reports on the two accused in the murder trial, who were sentenced to death last week. Razak Baginda, a close confidant of newly-minted Prime Minister Najib Abdul Razak, was charged with abetting the murder but was later freed. The controversial court decision had sparked off a fresh round of speculations that the powers-that-be had a hand in the acquittal. 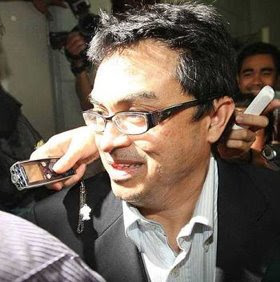 Not only that the political analyst's name should not be mentioned, visuals showing him in previous trials and after his release are also banned, according to the email. The other two restrictions were related to the new premier.

The TV stations were barred from reporting that Najib and his wife, Rosmah Mansor, were linked to the grisly murder case. Also, statements from those accusing Najib and Rosmah of being involved in the case were also prohibited.

It is not clear whether Media Prima has been instructed by government officials to ‘cleanse’ the three key personalities from the Altantuya case. The email, which has been widely circulated in the company, was sent last week to editors of all different language sections within the Media Prima group. An assistant from Kamarulzaman's office told Malaysiakini that his boss was currently overseas and would not be available to comment on the directive. There is also no response to an email sent to Kamarulzaman.

The Media Prima ban came hot in the heels of a blackout by state-owned RTM on reporting the on-going political crisis in Terengganu. Malaysiakini has reported on Wednesday that RTM blacked out news on the apparent boycott of the Terengganu state assembly sitting by 10 state representatives earlier this week. This was however denied by the government.

Last week, two police special action force personnel - chief inspector Azilah Hadri and corporal Sirul Azhar Umar - were sentenced to death by the Shah Alam High Court for murdering Altantuya. The two, who were part of a security detail to protect VIPs including Najib, have since appealed to the higher court. Since the case hit the headlines, Najib has been forced to repeatedly deny having any links with Altantuya and the murder case.

When Najib was defence minister, a company controlled by Razak Baginda was awarded a 'commission' of RM534.8 million for the purchase of two Scorpene submarines from France. The government has denied that the contract given Perimekar was a hefty commission but for the compnay "to prepare support and coordination services" for a period of six years.

The opposition has been exploiting both issues to attack Najib's integrity, especially during the three key by-elections earlier this month. This had prompted the police to issue a gag order on all political ceramah from raising the controversial murder case.

Maybe, soon bloggers too will be ordered not to write or put up picture of Najib, Big Mama, Razak Baginda & Altantuya........wow!!!

If the PM says he is innocent why is this unnecessary censorship?