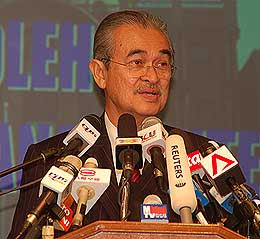 The premier issued a warning that appear to indicate the possibility of an ISA arrest for the maverick politician at press conference at Putrajaya this afternoon to announce a reshuffle of cabinet portfolios.

He has become a threat to the economy and possibly (national) security," he said. This in itself provides sufficient grounds for the authorities to invoke the tough security law, which provides detention without trial against Anwar.

And when asked what action the government would take against him, Abdullah refused to reveal his cards, saying: "I will not indicate what plan I will take, what I do will be in the best interests of the people and the country."

"Because of Anwar's actions, there are fund managers who have reported that Malaysia is purportedly no longer a good place for investment because of the unstable political climate."

Abdullah said the opposition leader has lied a lot about the country's economic status, even claiming that there is no Foreign Direct Investments (FDI) coming in. On the contrary, the premier said FDI is still flowing in and Malaysia is popular among investors.

"Anwar wants to destroy the country and exploit the people’s trust and tarnish the country’s image abroad."

Using the ISA against Anwar would undoubtedly have severe repercussions but such a move would not come as a surprise after three individuals, including an opposition politician, were nabbed under the draconian law last Friday.

James Chin, a political analyst from Monash University's campus in Kuala Lumpur, said Abdullah's comments were a clear warning that Anwar could face arrest under ISA.

"If they arrest Anwar under ISA, it will not be accepted by both Malaysians and the international community," he told AFP.

The two-time ISA veteran claimed that he has enough ruling MPs willing to cross over into the opposition alliance Pakatan Rakyat in order for him to form government with a simple majority.

Anwar had failed to initiate the coup yesterday, Sept 16 - the date which he had set - but reiterated that he had the numbers and the toppling of the BN-led government was imminent.

The 61-year-old politician had also requested to meet Abdullah to discuss a transition of power plan and urged the premier not to resort to drastic measures, like declaring an emergency, to thwart the takeover.

Abdullah, however, rejected the meeting again today and dismissed the takeover claims as lies. He accused Anwar of "lying to the public and confusing the people".

"There is nothing to discuss," said the prime minister.

Though Anwar's 916 passed without any fanfare,yet it forced Pat Lah to switch the Finance portfolio with the Defence portfolio from Najib. Why the sudden change, if not for some ulterior motives or another sign to overcome his weakness...............

With the stern warning coming from the man himself, is Anwar going to be roped in under ISA? Only time will tell..........

Blogger Kickdefella is being detained under the Sedition Act in Kota Baru..............