Muhyiddin, being honest doesnt pay in UMNO,time to move..... 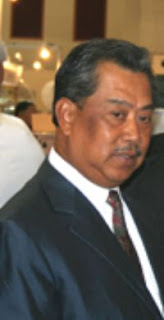 Muhyiddin Yassin today warned that the ruling party and the coalition it has led for half a century faces oblivion at the next elections if it fails to reform. The Barisan Nasional coalition, helmed by the ruling Umno, has floundered since March elections which saw a resurgent opposition score unprecedented victories.

Muhyiddin, who has called for PM Abdullah Ahmad Badawi to stand down before his planned departure in 2010, said the party must address internal conflicts and the opposition threat.

"It is a situation which is very serious. It is of concern not only to Umno members but to the country at large, to the Barisan Nasional and people who cares about what is happening to the government," he told a press conference.

"If nothing happens then I am not too sure if the lifespan of Barisan Nasional, of Umno in particular, can sustain beyond the year 2013," he said, referring to the scheduled date of the next general election.

Abdullah has defied calls to quit despite being confronted by rare criticism from within his cabinet, as well as a challenge from opposition leader Anwar Ibrahim who says he has enough defectors to topple the government.

Muhyiddin made another attack on Abdullah's plan to hand over to his deputy Najib Abdul Razak, saying Umno members should decide on the future leadership in internal elections that begin next month.

"What has been agreed upon is only a convention. There is no such provision in the constitution," he said.

If Abdullah steps down as premier, Najib is widely tipped to replace him, with Muhyiddin as his new deputy. - AFP

Mahyuddin's warning about the demise of UMNO is timely. UMNO is on the brink of destruction, not because of its wavering supports of the Malay masses, but by the leaders themselves who preaches the politics of patronage,nepotism, croynism and etc,etc........

The reason can be best be described in Mahathir's own words..."Merdeka has brought power and wealth to the new Malay elite. Politics is found to be the panacea. It provides a shortcut to everything. It makes possible the attainment of positions of immense power. These Malays are in a position to acquire riches. These few Malays - for they are still only a very few - have waxed riches not because of themselves, but because of the policy of a Government supported by a huge majority of poor Malays. It would seem that the efforts of the poor Malays have gone to enrich a select few of their own people. The poor Malays themselves have not gained one iota."

That was Mahathir in 1969 and he was 100 % right. But when he came to power he shitted on whatever principles he held then.

Najib's preference as his deputy wont be Muyiddin but Hishamuddin Tun Hussein. Will Muyiddin suffers the same fate as Tengku Razaleigh?

Its better for Muyiddin to abandon the sinking ship or be another Tengku Razeligh, sampai ke tua apa pun tak ada.........

Muhyiddin better crossover now before its too late. But dont be too ambitious lah in PR. Minister boleh lah. Proof that you are good in PR govt, no money politics ah. Dont bring over the bad traits of Umno into PR ya.