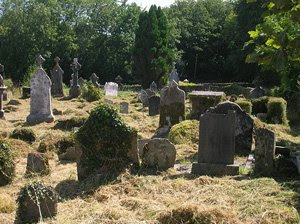 Stealing from the dead - R. Nadeswaran and Terence Fernandez

First they pinched land from the poor. Then they pilfered playgrounds from children. Now, they are even stealing from the dead! One administration handed over land acquired for a cemetery to a private developer. The succeeding administration destroyed a forest reserve to replace the stolen land.

What was meant for a cemetery bordering Bandar Utama had been handed over by the Tan Sri Abu Hassan Omar-led Selangor government to developers. Subsequently, the Datuk Seri Mohammad Khir Toyo-led government decreed that there is no land left for graves and de-gazetted the forest reserve in Kota Damansara to compensate the blunder made by its predecessors. But both never believed that two wrongs don’t make a right.

Not only has the illegal alienation of the cemetery land robbed original land owner – Damansara Jaya Bhd – of its legal rights to develop the land, it has also resulted in residents of Bandar Utama and its surrounding areas being deprived of a burial ground.

However, of grave concern is that because the original burial land was “sold” to developers by the previous state government, part of the Sungai Buloh Forest Reserve was de-gazetted as an alternative site for the cemetery plot.

According to official records, during Tan Sri Muhammad Muhammad Taib’s stewardship of Selangor in 1986, the state government had acquired 17ha from Damansara Jaya Bhd for the purpose of a cemetery for Muslims, Christians and Bahais at a cost of RM3.25 million or about RM17 per sq ft – far below market rates.

Subsequently, under Abu Hassan’s administration, about 16ha was alienated to Nayaka (M) Sdn Bhd which subsequently entered into a joint venture with Cekap Corporation Bhd, a subsidiary of the Metro Kajang Group to develop a commercial and housing complex – Pelangi Damansara.

According to the acquisition notice filed under the Land Acquisition Act, Damansara Jaya Bhd which was developing Bandar Utama at that time, was compelled to surrender that parcel of land and was to have been paid RM3.25 million – a sum which is now in dispute.

(This is the same developer who had later surrendered land for a balai raya, schools, food court, telecommunications exchange and fire station to the state government under the Abu Hassan administration which – as theSun had reported over the past fortnight – had instead been sold to businessmen, a Penghulu Kampung, as well as the MIC and Gerakan.)

However, instead of honouring the purposes for which the land was surrendered, the state government sold it to Metro Kajang Sdn Bhd for a massive commercial-cum residential project worth RM450 million.