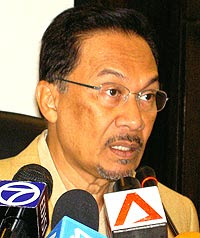 Anwar Ibrahim says Pakatan Rakyat (PR) leaders have written a letter to Prime Minister Datuk Seri Abdullah Ahmad Badawi requesting him to convene an emergency Parliament session no later than Tuesday to deliberate a motion of censure against the current federal government .

The parliamentary Opposition Leader said his request is in accordance with Article 11(3) of Parliament’s Standing Orders (SO) and warranted an immediate response, given the gravity of the current political impasse.

"The SO is quite clear that the request is to be given to the prime minister to convene the session. We will notify the Speaker (Tan Sri Pandikar Amin Mulia). We have sent the letter to the prime minister and he will have to inform the Speaker to convene the emergency session," he told a press conference in Parti Keadilan Rakyat’s headquarters today.

"A delay in Abdullah’s response will be interpreted as nothing short of a further sabotage of the democratic process and abuse of Executive Power. The prime minister’s haggling on the syntax of our first letter is puerile at best.

"The intent of our meeting as described in the letter was clearly to discuss the future course of the nation’s leadership, though in deference to his position and in accordance with acceptable norms, we remain considerate and polite in our approach," he said.

Anwar said he found Abdullah’s comment about him on Wednesday to be reckless and irresponsible in light of the disastrous outcome of last Friday’s Internal Security Act (ISA) raids.

"As the incumbent prime minister actively holding office and exercising all executive powers and as the outgoing finance minister, we hold him fully accountable for the current political turmoil and mismanagement of the nation’s economy.

"His (Abdullah) accusation that I have had an adverse impact on the nation’s economy is entirely without basis," he said.

"Abdullah has conflated what is essentially an issue of democracy, freedom and the rule of law with national security. The use of the ISA to harass and detain duly elected political opponents is a grave transgression of the law and its continued use would further erode confidence in the current government and exacerbate political instability," he added.

To a question, Anwar said if Abdullah refused to call for the session, he will immediately hold an emergency meeting with all Pakatan Rakyat (PR) leaders and that he did not discount the possibility of seeking an audience with the King, which he described as the last resort. 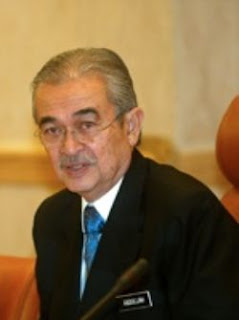 "We have to exhaust all institutional and legal procedures ... unless the prime minister is willing to listen and concede, but he has refused to have a meeting," he added.

On why PR had refused to disclose the list of Barisan Nasional (BN) MPs who were willing to defect, Anwar said: "The prime minister only has to know that we have the majority of MPs and we have told him, and if he wants to know the details, he should convene the emergency session."

Asked why PR cannot wait until Oct 13 when the parliament meeting resumes, he said the country’s economic situation could not afford to wait as "any responsible government should by now have a task force to deal with the crisis".

"We do not have (such task force) and we have to deal with it immediately," he said.

When pressed for the list to be made public, Anwar said: "We are not in an all-democratic environment, so we will have to protect them (the MPs). So I want the assurance from the prime minister that the MPs, including Teresa Kok (Seputeh MP, who is now detained under the ISA), be given the right to appear on Tuesday and vote (in the emergency session).

"The MPs have requested that their names remain a secret until the moment we appear together and I have to respect that," he said.

To a question, Anwar said the number of MPs who have agreed to defect has not decreased.

Asked if he was worried about the possibility of being detained under the ISA after Abdullah described him as a threat to the country on Wednesday, Anwar said: "Home Minister Datuk Seri Syed Hamid Albar has promised no more ISA detentions."

Meanwhile, Pat Lah rejects 'no confidence' session as he says ,"I don't see the need as the Parliament will sit after Ramadhan," Abdullah told reporters after chairing an Umno supreme council meeting at Putra World Trade Centre today. The Parliament is set to resume its sittings on Oct 13.