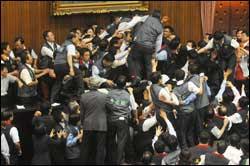 THERE are many among us who believe that our Members of Parliament are wasting their time on their tour to Taiwan on a lawatan sambil belajar. They say it’s their money, and NOT the people’s money. Despite perceived notions on what comes out of their mouths with some of our politicians, let’s take their word for it. If they had touched taxpayers’ money, then, there’s every reason for us to feel angry and bitter that they deceived us yet again. But then, the cost of the holiday is coming out of their own pockets, we must assume they must have considerable wealth or they must be highly paid. But there are quarters who believe someone is "investing for the future". Without any substantiation, such thoughts must be dismissed.

It’s not weekend money for rojak as one former finance minister put it, but the trip is costing big bucks. Hotel rooms don’t come cheap in Taiwan and neither do the karaoke sessions, if they find the time after all the visits to fruit orchards and animal farms. Maybe, after washing up, like all humans, they too need to unwind. Didn’t they say that all work and no play makes Jack a dull boy? 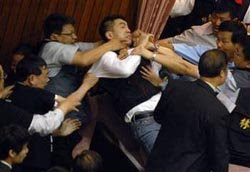 But didn’t the government, not too long ago, ask the people to be prudent and careful with their spending? Weren’t we told to tighten our belts with the fuel price increase? So, if lawmakers don’t set an example by practising what they preach, then we, the ordinary rakyat have everything to complain about. All these points are irrelevant if MPs have been given special dispensation and exempted from such advice or it can be viewed as their collective defiance against the wishes of the government.

Yes, they are going on this holiday to Taiwan so that they have better knowledge on agriculture and this, according to the leader of the pack, will enable MPs to "educate", "inform" and "prepare" them for quality debates in Parliament. If we are in Standard Two or Three, we will believe them hook, line and sinker. But we are not kids, and what is the need to kid us?

If the rakyat thought that only members of the Selayang Municipal Council go to Mauritius and South Africa to graduate with a diploma in toilet inspection (one of them is now a deputy minister), we now have to believe that many of our MPs would become farmers or will be experts in the area. For a start, this will allow them (and give them an unfair advantage) to apply for state land for farming and then use their influence to change the land use from "agriculture" to "housing" and sell the land at a premium. Who knows, by now, some developer is already eyeing a parcel of land, and has made substantial investments for which some returns would be expected.

No, we are in no way suggesting anything sinister, but we foresee that there’ll always be a long queue of opportunists who will seize this trip and make it worthwhile for a friend in a three-piece suit, who is often seen chauffeur-driven with an "Ahli Dewan Rakyat" insignia on the bumper of his Merc. 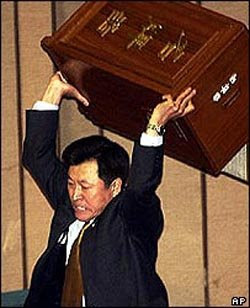 By the way, we hope that the Taiwanese Parliament is not in session because our MPs can learn another trick or two. While some are apt at using their hands and fingers to gesticulate their animal instincts, others have in their vocabulary words that would make even sailors blush; the parliamentarians in Taiwan have shown their expertise in kung-fu for the world to see. Let’s hope such antics are not brought to the Dewan Rakyat.

THE CROOKS have retreated into their cocoons. There are too many of them and there’s not enough place to hide. The shredding of documents in the early hours of March 9 has not helped their cause. Files, letters and other correspondences (including those from lawyers) are still floating around. And at regular intervals, they are finding their way to the office of theSun.

Those who thought they can continue with their shenanigans under the new regime have to accept the bitter truth – money, after all, cannot be a leveller at all times – although mutterings have been heard of one or two who have been blinded by security paper – wads of them, in the colour purple.The people who were in power who thought their invincibility gave them the right to break all the rules will now have to face the music. Hopefully, the long arm of the law will not spare them.

To the givers and the recipients of goodies; to the people who sponsored lawatan sambil belajar for elected representatives, their spouses and sometimes even the extended families, it’s only a matter of time before you are exposed. To those who stand up and claim to be whiter than white and at the same time are involved in dubious deals; to those who have been beneficiaries of the crooked system and to those who acted as middlemen and go-betweens or Mr Fixits, the end is nigh. To quote Mulder and Scully (of X-Files fame): "the truth is out there" – and it is only a matter of time before everything is in the public domain.

---------------------
Just 4 days before the final countdown,PKR had initiated a move by sending 4 high ranking members over to Taiwan to meet these MPs. This study tour has become the laughing stock of the nation. I suppose they are there to learn some tricks how parliamentary sessions can be turned into a boxing and kung fu fighting ring that often can be seen in the Taiwan Parliament,as in these pictures indicates, here and watch video here.

Taiwan's "parliament" is notorious for fistfights, with many lawmakers enjoying the media attention when scuffles break out. Chairs and shoes have also been known to fly across the chamber on occasion.

But what puzzles me is,how are they going to meet these BN MPs since our SBs are there too,spying every movement the BN MPs makes.....

Or probably,those BN MPs has given notice for the 4 PKR members to meet them there and strike a deal.......