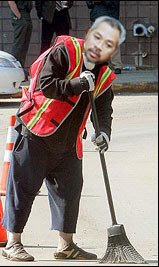 Terence Fernandez in his Friday Down 2 Earth column wrote.........

First it was low-cost land alienated to the wife of an assemblyman to build their mansion. Then, land earmarked for a food court was given to a town councillor to establish a commercial complex. Elsewhere, school reserve land was leased for a beer garden. Now we have seven parcels of land meant for public amenities – including that for a surau (is nothing sacred anymore?) – given away to political parties and businessmen.

Hot on the heels of these revelations, we have a businessman and former senior government servant who with the blessings of City Hall and the Federal Territory Land Office built a bungalow on the cul-de-sac of a public road! This home owner probably wanted to have VIP neighbours since nearby are the homes of a bank’s top official and a senior member of the government.

Then we have poor families being evicted from land they have been squatting on for three generations, only to be crammed into a two-bedroom flat. A farmer who has been cultivating on government land for 20 years is one day told that his Temporary Occupation Licence has expired and he would have to move.

Over in Petaling Jaya, lease on several parcels of land are coming to the end of their tenure and it would cost homeowners in the region of RM100,000 to RM500,000 to renew them. Yet, Parti Gerakan Rakyat Malaysia (Gerakan) and the Malaysian Indian Congress (MIC) managed to obtain prime real estate in swanky Bandar Utama, the former at far below market value.

Ownership of the Tamil school land is in dispute notwithstanding MIC president Datuk Seri S. Samy Vellu’s "I stole it, it’s my grandfather’s land" outburst. The party has since said that the whole thing was an "administrative error". But this does not change the fact that land meant for a school has been alienated to a major political party.

This, ladies and gentlemen, is the legacy of the previous Selangor state administrations. From far back (as far as investigations show) as Tan Sri Abu Hassan Omar to his successor Datuk Seri Dr Mohamad Khir Toyo

BPR, apa macam? You acted on newspaper reports as in the case of Nallakaruppan whose press statement on a RM60 million payment to Anwar prompted your officers to record a statement from him with immediate effect. The only snag was BPR didnt read this........

What about this land deal,that involved component parties of the gomen,MIC and Gerakan,when will BPR act on it? Is BPR practising double standard when faced with the gomen and without taking away the credit they certainly deserves, BPR should be consistent or rather seen to be consistent. Here, this will help BPR in case the local media forgot to publish it.........