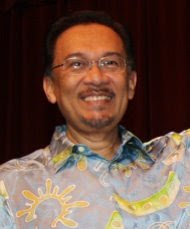 Malaysia marked its 51st birthday yesterday with a mammoth parade that did little to mask the uncertainties a re-born opposition poses to the government’s uninterrupted hold on power since independence from Britain in 1957. Thousands of people marched in the historic Merdeka (Freedom) Square, watched by Malaysia’s king and government leaders. Fighter planes and helicopters roamed the sky above. But beneath the pomp and gala, Malaysia’s embattled government is heading into major political turbulence.

Opposition leader Anwar Ibrahim says he is seeking to win over 30 defectors from the ruling Barisan Nasional coalition to form a new government by his self-imposed deadline of September 16. Anwar said on Saturday his opposition alliance would not use money or blackmail to woo defectors.

“The MPs can see the trend among the people who are demanding change,” he said. “That’s why they are keen to support a party that is fair to all races.”

Anwar’s Pakatan Rakyat alliance, which made unprecedented gains in March general elections, has 82 seats in the 222-seat parliament. It needs 30 more to win a simple majority.
The prospect of a power struggle has alarmed foreign investors and unnerved the financial markets. The Malaysian currency, the ringgit, is near an 11-month low, and the stock market hit a 20-month low last week.

Government leaders have played down the prospects of their MPs crossing over to Pakatan. But that has not stopped them from scare-mongering about Anwar. Deputy Prime Minister Najib Razak said the country could lose its independence if the Barisan government loses power. “If we do not safeguard the nation’s independence, we will only be left yearning for it if we lose power,” he said on Saturday in his home state of Pahang.

Anwar is banking on Barisan MPs from the eastern states of Sabah and Sarawak on Borneo. The two resource-rich states have complained that their grouses have often been overlooked by the federal government. 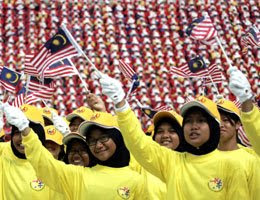 In a major setback to Prime Minister Abdullah Ahmad Badawi, several of his MPs from the two states have refused to sign a petition launched last week pledging support for him.

Abdullah moved to appease the Sabah and Sarawak state governments by proposing major infrastructure projects in his 2009 Budget speech in parliament on Friday. In his National Day speech, Abdullah asked Malaysians to rally behind his government to face “all enemies and challenges”.

Anwar rejoined parliament on Thursday after a 10-year absence and immediately clashed with the government, leading an opposition walkout.

Anwar, once the protege of then Prime Minister Mahathir Mohamed, was forced from office in 1998 on corruption and sodomy charges he says were part of a conspiracy to ruin his career. Asked if he was still on track in his quest to topple the government, Anwar told reporters on his first day in parliament on Thursday: “Yes”.

At the same time Anwar must fight a new sodomy charge, which he says is politically motivated, at a trial that begins next month. If the new sodomy prosecution is successful, Anwar could get 20 years in jail, effectively ending the 61-year-old’s political career. Even if he is not found guilty, months in court could overshadow his push for power.

There has been important progress on Darfur in the past two months. We agreed on the deployment of a robust UN/African Union force and the start of peace talks. But the situation remains completely unacceptable. In the coming weeks and months, we commit as leaders to redouble our efforts to make further progress.
------------------------
adolfo
Internet marketing