We have just heard a Pas official say, "support BN and PH, go to hell", then this official apologized. Before that, Lebai Razman from Perak said, "If Anwar is supported as PM, Anwar will allow men to marry men, women to marry women".
Most recently, lebai Hadi said that he was worried because DAP fielded many Malay candidates. Previously, Lebai Hadi was worried because PH was controlled by the Chinese from DAP. When DAP puts a Malay candidate, he worries too. Don't you see how stupid and racist Hadi is?

What is he not worried about? He is not worried if a Muslim-branded party puts an infidel as a candidate. If he puts a non-Muslim candidate, the law is halal. If the DAP party places a Muslim candidate, the law is 'haram' and worrisome. Those are the signs of misguided and misleading religious sellers.
It's strange, miraculous, a person like Hadi can make a fool of many of his supporters, including the Ustaz. That's Hadi's advantage, which is that he can fool people to be on par with his brain. - Wfauzdin NS
Kalu PH memerintah,terancamkah kedudukan orang2 Melayu? Video di atas ini menjawab dakwaan di atas dan berhujah PH bukan sahaja memperjuangkan Melayu, bahkan kesejahteraan dan keadilan rakyat Malaysia seluruhnya... 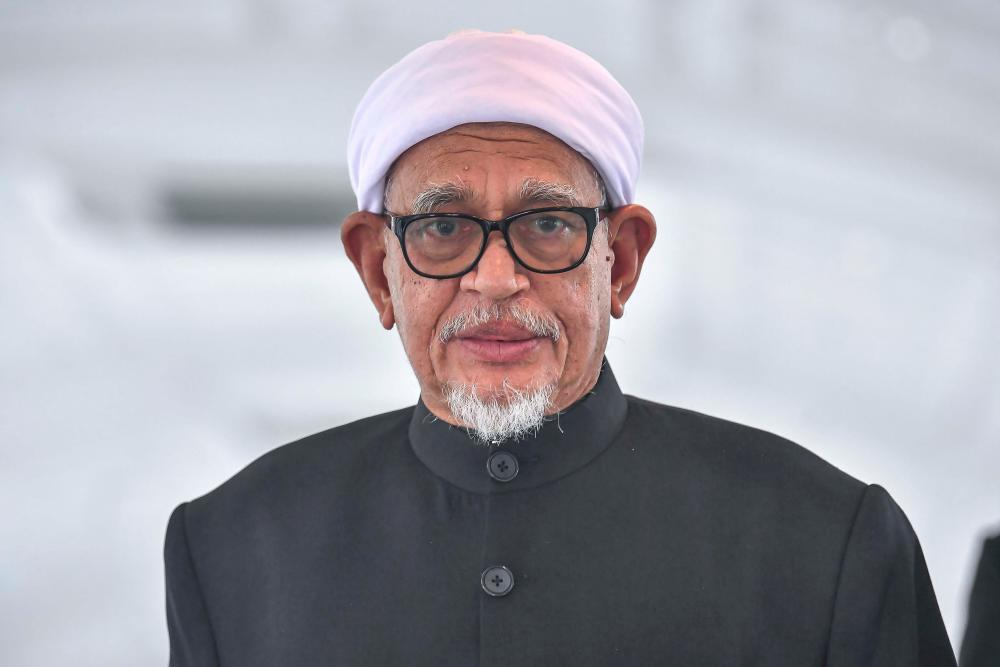 “Day after day Hadi provides us
more reasons why he’s unfit to be PM”...
There are four candidates vying to be the 10th prime minister (PM) of Malaysia – UMNO president and Barisan Nasional (BN) chairman Datuk Seri Ahmad Zahid Hamidi; Bersatu president Tan Sri Muhyiddin Yassin; PAS president Tan Sri Abdul Hadi Awang and Pakatan Harapan (PH) president Datuk Seri Anwar Ibrahim.There is no fifth candidate for the 10th PM of Malaysia – not even Datuk Seri Ismail Sabri, although he is the “poster boy” of the UMNO/BN coalition in the 15th General Elections (GE15).
I do not believe Ismail himself privately thinks that he is going to be the PM after GE15 should UMNO/BN win the general election, seeing how his UMNO ministers were culled and not put up as candidates, and the recent statement by Zahid that it is the unquestioned prerogative of the Yang di-Pertuan Agong to decide who will become PM.
The results of voting on polling day this Saturday (Nov 19) will decide who between Muhyiddin and Hadi will be the contender for the post of the 10th PM of Malaysia for Perikatan Nasional (PN) – depending on whether Bersatu or PAS wins the most parliamentary seats between them. As for Gerakan, I expect all of them to lose in the GE15; the only question is how many of the Gerakan candidates will lose their deposits.
Anyway, Hadi is providing more reasons every day as to why he is unfit to be PM of Malaysia, regardless of the number of PAS MPs elected on Nov 19. A Malaysian PM must be a man of his word and a model of integrity and probity. He cannot be openly spreading lies and untruths.Hadi has accused the DAP of being anti-Malay, anti-Islam and anti-royalty. Has he got any proof and why he has not produced said proof?
Recently, he made frequent attacks on the DAP, even alleging that DAP leaders are communist and godless. He further alleged that Malay leaders contesting on DAP tickets as candidates in GE15 are being used by the DAP to win Malay-Muslim votes. How can Hadi aspire to be PM when he is prepared to tell lies and does not understand the meaning of ordinary terms? 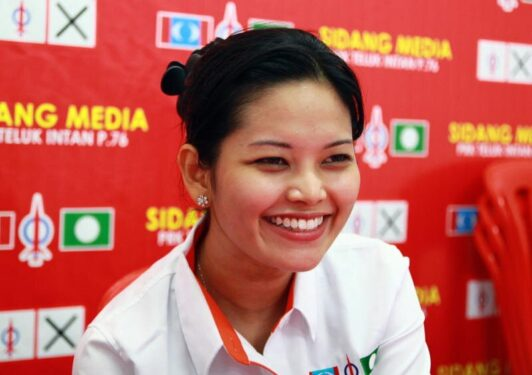 Do you remember what you said in Teluk Intan? Does Hadi remember what he said during the Teluk Intan by-election in May 2014? Hadi had praised Dyana Sofya Mohd Daud (pix,above), the DAP candidate for the Teluk Intan by-election, for making DAP her political party of choice despite being a Malay. At the time, Hadi hit back at detractors who criticised PAS  for choosing to partner with DAP, saying PAS has more in common with DAP than with UMNO.
He reportedly added: “We feel that Dyana is brave to be a candidate, more so a DAP candidate”; Dyana’s detractors have labelled her a “traitor to her race” and an ingrate for joining DAP, especially when her mother herself is an UMNO member.
Besides that, Hadi once reminded PAS members that DAP had helped PAS when the BN coalition tried to oust the Islamist party from ruling Kelantan during the 1977 Kelantan Emergency. He said although there are so many things different between DAP and PAS – like what is halal (permissible) and haram (forbidden), alcohol and pork and hudud – the two parties agree with each other in eradicating poverty, cruelty and corruption, among others.
Hadi should tell Malaysians what happened after the Teluk Intan by-election in 2014, where the PAS leadership did a somersault and decided that they have more in common with UMNO, and supported Datuk Seri Najib Razak and his 1Malaysia Development Bhd (1MDB) scandal.
Does Islam teach its leaders to tell lies and untruths and to cooperate with those guilty of corruption? I do not think so. Like all great religions, Islam stands for truth, freedom and justice. Furthermore, Hadi insults the intelligence and morality of the DAP’s Malay leaders and candidates by alleging that they are used by the Chinese.
For Hadi’s information, in the DAP, we are all Malaysians, although we are also Malays, Chinese, Indians, Dayaks and Kadazans, or Muslims, Buddhists, Hindus and Christians. However, nobody makes use of another for their own interests. 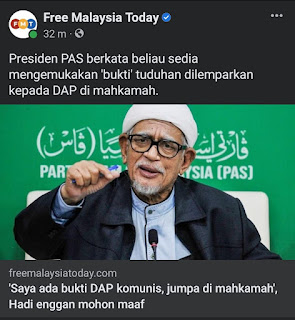 DAP has produced a leader who had crossed the racial and religious divide to defend the dignity of an underaged Malay girl, paying the price of being jailed for it – i.e. former Penang chief minister Lim Guan Eng.
Has PAS produced any leader who had gone to jail for the rights and dignity of a Malay, let alone cross the racial and religious divide to defend the rights and dignity of a Malaysian of another race or religion?
Here’s what being “secular” in Malaysia means.Hadi also does not understand the meaning of “secular”, for the word does not mean anti-religion or godless, but, as entrenched in the Federal Constitution and Rukun Negara, it means that Islam is the religion of Malaysia but other religions can be practised freely and in peace.
It is unfortunate that Hadi is trying to interpret “secular” as ‘godless” or “anti-religion” when this has never been the meaning in Malaysia.
I have been an MP for some 50 years and Opposition leader in Parliament for some 30 years. I never knew I was a communist. When did Hadi discover that I am a communist?  I am interested to know what made me a communist after the Teluk Intan by-election in 2014.
The Royal Malaysian Police Force’s (PDRM) Special Branch does not know that I had been a communist. Did Hadi brief the Special Branch that I am a communist, with all the supporting documentation? If not, Hadi has failed his duty as a citizen of Malaysia.
Instead of looking for factors and reasons to unite Malaysia of many races, religions, languages, cultures and regions, Hadi is trying to invent new reasons to divide Malaysians. Is such a person fit to be the 10th PM of Malaysia? - Lim Kit Siang
Sapa yang lebih komunis DAP or UMNO...
Mail 2 kupang terlupa kot...
Kekecohan yang dicetuskan oleh Pemuda BN Bagan Datuk.Mereka menjerit memaki hamun. Salah seorang mereka membawa parang. Inilah sikap samseng Sarip Dol penyokong BN di Bagan Datuk. 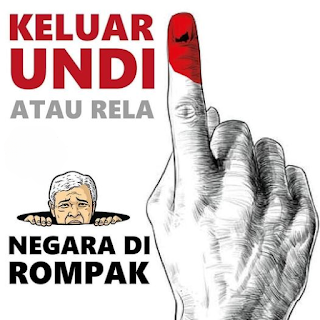 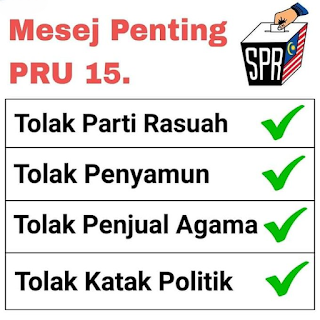