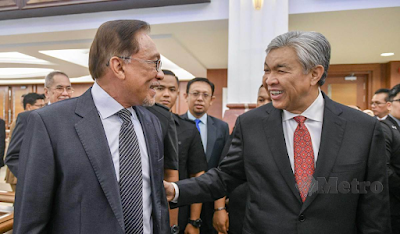 I'm sceptical and cynical of the speculations that the Prime Minister, Anwar Ibrahim, would appoint Umno President, Ahmad Zahid Hamidi, as Deputy Prime Minister, or for that matter to any government post. But if he does, he would be performing a harakiri. He would lose the support of his own supporters and drive away fence sitters who are beginning to warm up to him.
He had made a positive inroads into the hearts of the people with his popular moves like not taking the PM salary, refusing to use a brand new Mercedes Benz S Class bought by the previous government and promosing to reduce the size of the Cabinet drastically.
But should he bring his old friend into the Cabinet, he would, with a stroke of a pen, jeopardises his growing image as a reformist and one who stands for good governance, transparency and accountability.
Any decision to include people with questionable character would be an affront to the sensibilities of all Malaysians who supported the Pakatan Harapan in the last two general elections in the belief that the coalition would provide a clean government.
The Barisan Nasional would not have done so badly in two consecutive general elections had it been led by trustworthy leaders. So let's pray and hope that Anwar would choose to prioritise the people's interest and country's integrity over short-term political consideration and self-interest. Having comes this far, he shouldn't throw away this golden opportunity. - A.Kadir Jasin
Should Zahid Hamidi be DPM?
To flesh out this question, we hear from two people with wildly differing opinions: Kadir Jasin who said that Anwar would be committing ‘harakiri’ if he appointed Zahid Hamidi as DPM, and Tian Chua, who sees it as a bitter but necessary move... Accepting Zahid as DPM
is not an issue anymore...
I will explain five strong reasons why Zahid is the obvious choice for a leadership position in the new Unity Government. Remember, this is a Unity Government, not a PH government. This government has Anwar as its PM and PH as a majority component. The rakyat are given a chance to rule again with PH at the head but it must accommodate, accept and nurture the other parties of BN, GPS and GRS.
This is a new world. This is uncharted territory. Principles of morality are fine in peace time but in a crisis and in war, difficult and hard decisions must be made and must be lived with. If grumblings occur and dissent follows, then all of us will sink and Mahiaddin and Hadi will be the new PM and DPM.
My first reason is that it was Zahid who single-handedly fought to keep BN intact and denounced the secret SDs by the ten MPs who had dishonestly made pacts against their own declaration to the chairman of BN. How can we trust those who do not know how to honor their own pledges? Zahid held together this understanding that I am sure had given much confidence to the YDP Agong to ask for a PH-BN unity government. Once Zahid had secured the BN, then GPS and GRS followed suit. Thus, Zahid and BN played a key and crucial role in the birth of the present Unity Government.
Secondly, Zahid needs to show his strength in the Umno election in December and if he falls, what do you think will happen to the Unity Government? I think those like Ismail and Hishammuddin who wanted Zahid to fall will easily make deals with the PN. No doubt absolutely in my mind. We can kiss our Unity Government goodbye and replace it with an extremist and greedy government of probably 90 ministers and deputies. So far, Zahid can show off that he has delivered Perak and Pahang as a win for BN as well as at the federal level. The icing would be the DPM.
Thirdly, Zahid has the most to lose if this Unity Government fails. His career will end before his corruption trials come to a conclusion. A man who has everything to lose will fight better than those who want to see him fail who would just make deals here and there and everywhere. Zahid needs Anwar and Anwar needs Zahid and the two will fight together or will fall together along with the hopes of Malaysians.
Fourthly, appointing another BN candidate as DPM will open the door to secret pacts with PN to make the DPM the new PM. We have seen this in the case of Ismail Sabri where immediately after being appointed DPM, he assumed the PM role with dealings and understandings. To Anwar Ibrahim, the leadership as PM is a responsibility in Islam and is not a coveted position. But to most politicians in Malaysia, the PM seat is prized as it is the key to untold wealth, power and position unchecked by a weak and unprofessional civil service.
Fifth, Zahid’s trial is still ongoing. Lim Guan Eng’s trial and that of Syed Sadiq are still ongoing. I do not see a problem if any of these MPs are appointed to minister or DPM posts. If they are found guilty, then they vacate the post-lah. What’s the problem? In Malaysia, we have real corruption that is not MACC checked and we have imagined corruption that the MACC charges. I have never had any faith in the MACC at all. If it were up to me, I would have disbanded this unit. It seems to serve itself and not the conscience of the rakyat
In conclusion, it is still up to Anwar to appoint and he has made it clear that it should be suggested by BN and GPS parties. If BN chooses Zahid, then Anwar and we Malaysians must accept. This is a battlefield promotion where when one commander dies, there is not much deliberation on who is next in line. Civil society and Malaysians can talk politics but they must know that they do not have political wisdom or instinct.
Principles of good practice are for a nice day in a seminar room but when fires are raging on all sides, bombs are exploding every other minute, instinct and opportunities are the only two survival skills and principles may need to be interpreted within a new and harsh context. As I have written before, we are in uncharted waters and we must stand firm with our leader whom we trust, or we might as well drill holes ourselves so all may drown ‘principally’ together. - Prof Dr. Mohd Tajuddin Mohd Rasdi 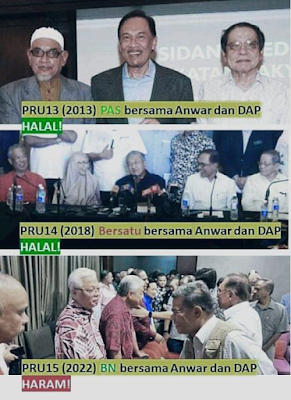