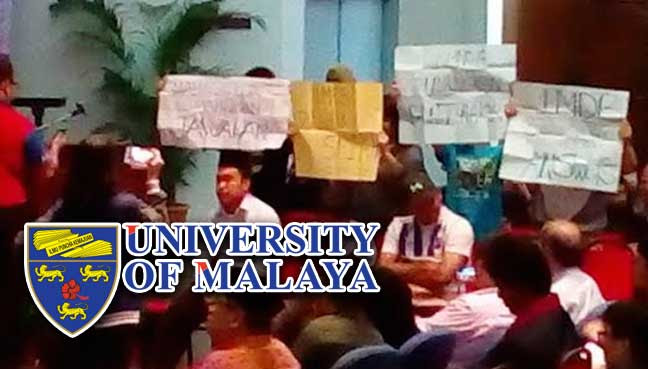 Student body says 1MDB event with Arul Kanda was ploy to brainwash students, as they were not allowed to express their views.

The students were merely stating their stand on the issue with the placards, he said.

“Every citizen, including the freshmen, are guaranteed under the Constitution the right to speak and express themselves freely,” he said in a statement.

The closed-door town hall meeting titled “1MDB and the Country’s Current Issue” was jointly organised by the Communications and Multimedia Ministry’s Special Affairs Department (Jasa) and Student Affairs and Alumni Division, UM, as part of Jasa’s series of roadshows.

Ho said the town hall session was a ploy to brainwash students over the 1MDB issue. If this were not so, he added, 1MDB’s fiercest critics, DAP’s Tony Pua and PKR’s Rafizi Ramli, would also have been invited, to give a balanced view.

“They have been following the development of the1MDB issue since the beginning, but were not invited.

“People were also prohibited from recording any video during the programme. It just proves the organisers were conspiring with Umno to brainwash the students.”

Umany has urged the organisers to hold another town hall event with the presence of Pua, Rafizi and Arul Kanda for students to hear views of both parties.

“There is no problem if the organiser wants to be Umno’s puppet, but the students will not allow the oldest varsity to be a campus of Umno.” - fmt

Among them was Arul's claim that auditing firm Deloitte was forced to withdraw as it could not complete its audit of 1MDB's accounts ending March 2015 due to missing documents confiscated by the authorities.

"As highlighted during the Public Accounts Committee (PAC) meetings, these documents can be accessed by making a request to the authorities. But 1MDB made no such attempt because it was a convenient excuse.

"Also, some documents like bank statements can be reproduced by the respective banks, but 1MDB still refused to give them to either the PAC, auditor-general or Deloitte. Why?" asked Pua.

The Petaling Jaya Utara MP also accused Arul of "hiding facts" when he did not mention to the students that Deloitte had disowned its audits of 1MDB for 2013 and 2014.

"Why did Deloitte disown them? Simply because Deloitte realised belatedly they have been led stupidly on a jolly-merry-go-round with fake documents and tall tales by the 1MDB management.

"And this is what the students meant by there's no one present at the talk yesterday to check Arul's 'facts'," said Pua in support of criticism by student groups about "brainwashing" by 1MDB.

"This one isn't 'hiding facts'. This is a blatant lie. Edra assets were acquired for RM12.1 billion and sold for RM9.83 billion.

"Arul said the sale wasn't a loss because the power assets paid dividends to 1MDB for two to three years.

"Check the Companies Commission of Malaysia audited accounts for the power subsidiaries. No dividends were declared to 1MDB. Not a sen," he added.

Pua said even if Arul's claim that Edra paid RM2 billion in dividends to 1MDB was true, he failed to mention that the subsidiary assets were acquired through loans costing more than RM1 billion a year in interest.

"Hence even if dividends were taken into account, they couldn't even pay the interest of the loans i.e. the losses would be greater.

"Arul admitted as much during the PAC meeting but again he tried to hoodwink students and Malaysians in this one-sided affair," he added.

The DAP leader described the UM talk last night, including Arul's insistence that he was not out to brainwash students, as "hogwash".

Pua argued that if students were allowed to “make up their minds” on the 1MDB imbroglio, he too should have been invited to “present the facts”.

“Surely, if I'm wrong with my ‘facts’, Arul can slam dunk and humiliate me in front of all these bright Malaysian students? No?” he asked.

The UM talk was part of the "Jelajah Kampus" roadshow organised by the Department of Special Affairs (Jasa) at different campuses.- mk

Dr Mahathir Mohamad has accused Prime Minister Najib Abdul Razak of attempting to unleash a gastronomical blow to weaken his will.

Recounting how the government withdrew the police escort for him, the former premier claimed there is now a plan to change his officer and cook.

He also alleged that his acquaintances, especially those in the business sector, are being threatened using the Inland Revenue Department.

"If they had paid their taxes, additional taxes are imposed," he said in a blog posting.

Apart from this, Mahathir alleged that those in Proton are disallowed from communicating with him, and businessman linked to him are not permitted to conduct business with the national car manufacturer.

"Najib's aim is for Proton to be bankrupt so that it can be sold for a song," he added.

The former premier claimed the plan is to sell Proton in full to foreigners in order to eradicate the national car industry.

"Only imported cars can be sold in Malaysia.

"Let there be nothing which was started by me. Let the local industry be destroyed as long as Najib is satisfied," he added.- mk 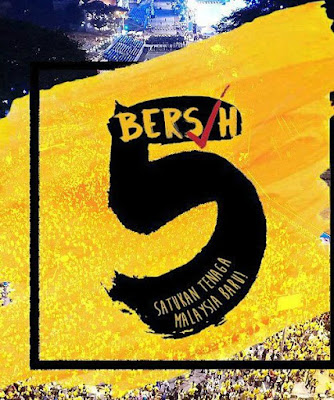 Hope for the Best,Prepare for the Worst.