Slew of police reports to be filed over 'keling' remark...

An NGO will file a series of police reports nationwide against Permatang Pauh Umno chief Zaidi Mohd Said for using a derogatory word during his speech at the Umno general assembly last week.

Tamilar Action Force (TAF) kickstarted its campaign with a police report filed in Klang this afternoon.

"This is not just for the Indian community, but for everyone," Malaysian Indian Progressive Association (Mipas) secretary-general S Barathidasan told Malaysiakini.

By using the term "keling", he said Zaidi had "deeply hurt and insulted" the entire Indian community in Malaysia.

Section 504 deals with “intentional insult with intent to provoke a breach of peace”.

"Zaidi did not only insult the Indian community, but also…the harmony of this country," he said.

'Why wasn't he ticked off?'

The Umno delegate also courted brickbats when he said the Chinese in Penang were successful due to illegal businesses but later claimed that he was misquoted.

Barathidasan said Zaidi's remarks showed that the Umno delegate did not respect other BN component parties and Umno leaders' call not to raise sensitive issues at the assembly.

Umno secretary-general Tengku Adnan Tengku Mansor had a few days before the assembly warned delegates not to play up sensitive issues related to race and religion.

Barathidasan (right) is also disappointed that nobody reprimanded Zaidi for using a derogatory term.

"The speaker should have stopped him. He has the right to stop a delegate from hurting other community's feelings.

"He should have stopped him immediately. But he did not do that. Why not?" he asked. - mk 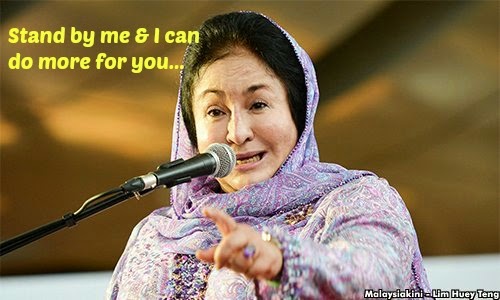 Rosmah Mansor has asked government-funded NGOs to become information technology-savvy so that they can protect her against "nasty people".

"You better teach them IT, to know how to answer back to those nasty people," she told more than 1,000 participants who completed their skills training programme.

"(If you) stand by me, then you happy, cannot-lah.

"Stand by me means you have to protect me, be in front of me and protect me, please," added the prime minister's wife.

Rosmah was at the graduation ceremony of the New Affirmative Action Movement (NAAM), a MIC friendly NGO which had been allocated RM37 million in government funds for two years, to train the public in various skills such as sewing, cooking and in agriculture.

She also urged some of the female entrepreneurs to follow her overseas to expand their professional network. "I can open the door, but you have to walk through," she said.

Rosmah then emphasised the importance of being focused and attentive in striving for business success.- mk