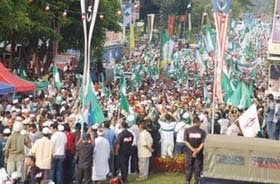 The federal government today awarded a whopping RM15.8 million worth of small infrastructural projects today to 583 class-F contractors through a computerised ‘bidding’ system.

The contracts were awarded to Terengganu-based contractors through the Implementation Coordination Unit (ICU) at a function at the Wisma Darul Iman, Kuala Terengganu.

At the function, the contractor or a representative would be invited on stage to prompt a computer to randomly select a project for the company. The nature and value of the project would then appear on a big screen.

Deputy Prime Minister Najib Abdul Razak, who officiated the event, said that the event today was a ‘world record’ where every participant was able to obtain a contract.

"In this lucky draw, everyone wins. Everyone gets a contract," he said.

Najib said that the computerised system was the most transparent and proudly noted that the system was designed by a Terengganu-born.

"Why only are roads being tarred now? Why are there goodies being given to the voters only now?

"The message they are sending is that you must vote for me because I tarred your roads and gave your kids lap tops," he said. 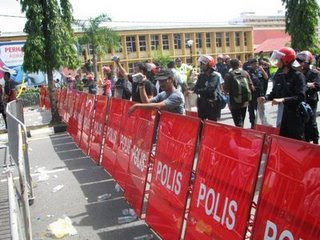 PKR is upset that the police failed to issue the party with a permit to hold a ceramah yesterday, ostensibly because Friday and Saturday were holidays in Terengganu.

"It is strange that with 6,000 police personnel, they cannot administer the issuance of permits," PKR information chief Tian Chua told a press conference in Kuala Terengganu today.

Chua said it was inexcusable for the police to use the holiday as a reason to shirk their duties. "Can you imagine, if you lost your identity card? Will they say ‘Today is a Friday and because it is a holiday, and I’m not taking this report’. I regret that the police have this attitude," he lamented.

Chua added that under normal circumstances, for example during the Permatang Pauh by-election, party workers merely had to inform the police on the details of the ceramah and did not need to obtain a permit.

"But we still respect the police and followed procedures. But for two days, we were told that it was not a working day and the office was closed," he said.