The battle for Kuala Terengganu begins....... 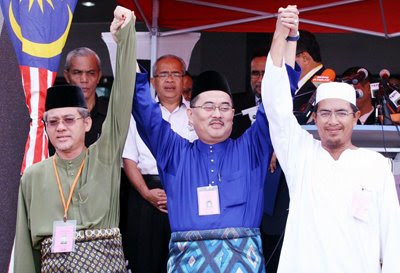 The Kuala Terengganu parliamentary by-election on Jan 17 will see a three-corner fight among Barisan Nasional (BN), PAS and an independent candidate. The BN candidate, Datuk Wan Ahmad Farid Wan Salleh, will face Mohd Abdul Wahid Endut of PAS and independent candidate Azharudin Mamat alias Adam. Returning officer Datuk Mat Razali Kassim made the announcement after at the nomination centre at the State Stadium after the objection period ended at 11am. He said four objections were received but they were all rejected. 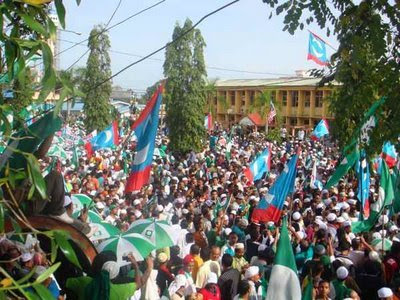 Azharudin, 46, a businessman caused a stir when he turned up at the nomination centre at 9.27am to submit his nomination papers because his candidacy was unexpected. He was proposed by Ahmad Affendi Shah Mamat alias Adam and seconded by Zakaria Abdullah. 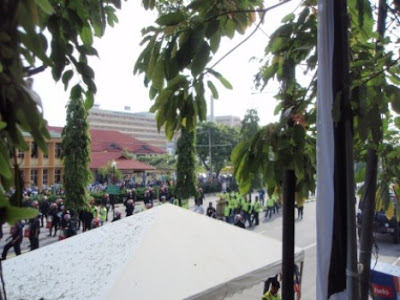 Harun Alias Ab Rahman Mohamad of Angkatan Keadilan Insan Malaysia (Akim), who had expressed his intention to contest earlier, arrived at 9.20am but did not submit his nomintion papers. Another potential candidate, Isma a Airfath Hassanuddin, did not show up.

The party supporters started converging on the area near the nomination centre as early as 6am.Several roads near the stadium were closed by police to facilitate traffic control. Police helicopters hovered above to monitor the situation. It was reported that 6,000 police personnel would be deployed to ensure public order during the by-election which is being held following the death of incumbent Datuk Razali Ismail on Nov. 28 2008.

According to Election Commission records, there are 80,229 voters in the constituency. The weather was fine throughout the nomination process.