Lingam pula lupa: "It looks and sounds like me but its isnt meee...

On the video clip;

When asked whether he was the man in the video, he said: “It looks like me, it sounds like me.”

DPP Nordin Hassan then reminded Lingam that previous witnesses had testified that it was him in the video.

“No matter what people, my answer is still the same - it looks like me, it sounds like me.”

He said he would not go beyond this until the original video clip is produced.

“I have consulted my experts, and the only way to determine the truth is to examine the equipment that took the video and the original tape.”

However,a sampling test done in a Spanish laboratory has verified that the voice of the person in the controversial video clip matched that of Datuk V.K. Lingam, the five-member Royal Commission of Inquiry was told today.Cyber Security Sdn Bhd’s senior analyst at the forensics digital division, Mohd Zabri Adil Talib, said the known source of voice sample belonged to Lingam, a verification that was made after the samples were sent for analysis at the Biometric Agnitio S.L. laboratory in Madrid on Jan 8,2008. Read here.

ACA's head of the forensics and IT unit Supt Wan Zulkifli Wan Jusoh also took the stand and testified that he downloaded the alleged video clip recording from the website www.anwaribrahim.com. The downloaded recording was copied into his computer hard disk and later copied onto a CD before it was sent to CyberSecurity Sdn Bhd for an analysis.

Interestingly, now Lingam & Co., are disputing that the analyzed video clip was not the original one. Nor wonder this Lingam guy got the guts to say, "It looks like me, sounds like me". 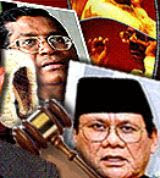 Who are you speaking to in the video clip?

Lingam also expects us to think it wasn’t Ahmad Fairuz as widely speculated at the other end of the phone line. Ahmad Fairuz's name was mentioned explicitly in the video by this crook who looked and sounded like Lingam. He must have taken a cue from his buddy Tengku Adnan Mansor who believes that he was either 'mabuk' or 'gila'.

Like his master,Mahathir, Lingam too endures memory lost, but his irony is, after six years he can still remember details like "three to six bottles of red wine and one to two bottles of whisky or brandy",however, he could hardly ascertained whether the guy in the video clip is really him and to whom he spoke with on the phone on that particular night. Can you believe this bullshit crook? Mind you this guy is still under oath. 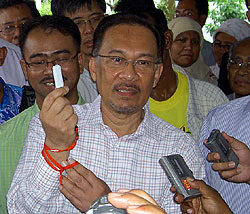 As for Anwar, he is wondering why he had yet been called to testify by the commission. He had already been subpoenaed by the commission and was the fifth on the witness list. He told reporters, “But now the commission wants a written submission (from my lawyer) as to why I should be heard - this is rather odd,” , adding that this raised questions on the conduct and the integrity of the commission.

Btw,wouldnt it be right if the first witness that the RCI should call is the person who exposed the video clip but until today that never happened. Is the commission being selective in whom they want to hear?

Probably the best may come last or otherwise,the RCI got to do some damage control now as Pat Lah's gomen is in the midst of asking for a new mandate from the rakyat. After all it was Pat Lah who selected the panel members.