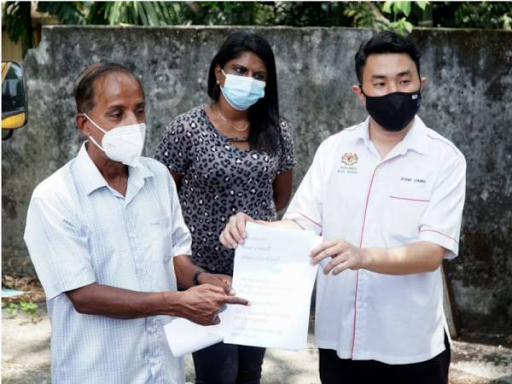 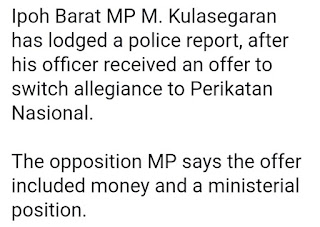 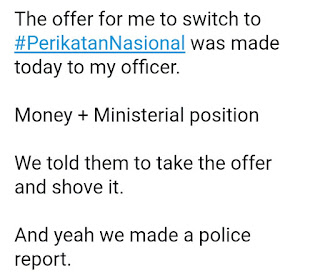 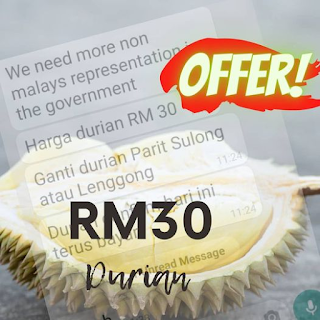 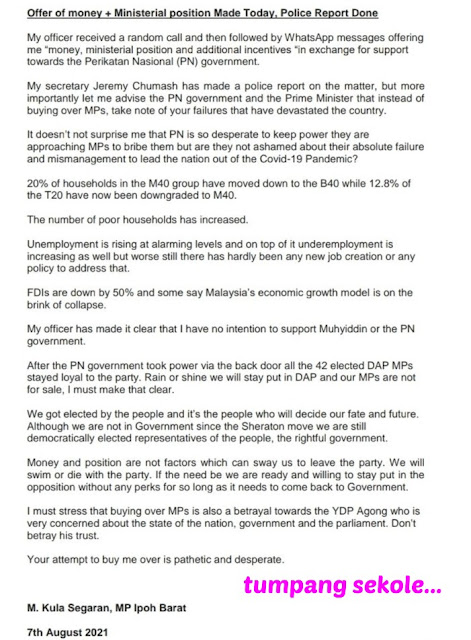 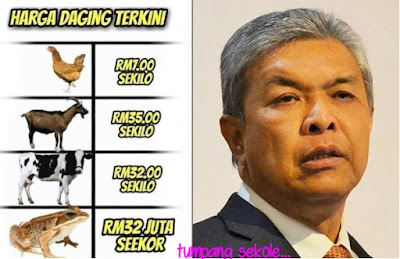 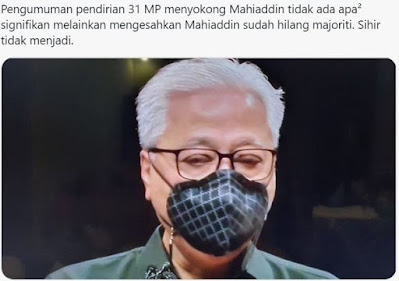 Sabri confirms govt has collapsed,
Muhyiddin doubts his own support...
Deputy Prime Minister Ismail Sabri Yaakob, probably thought he was doing his new boss – Prime Minister Muhyiddin Yassin – a great favour, has paraded some lawmakers today (August 6) to show support for the government. Mr Sabri said that 31 MPs from the UMNO-led Barisan Nasional (BN) coalition will continue to support the government until the coming vote of confidence in September.
However, “turtle egg” Sabri might not realize that he has done more damage than good with his latest silly stunt. He has committed at least three biggest blunders. First, by officially announced that 31 out of 42 BN MPs are supporting the prime minister, it’s an admission that the Muhyiddin administration is not only illegitimate, but has effectively collapsed.
Muhyiddin, whose Perikatan Nasional government was struggling on a razor-thin majority of 113 seats in the 222-seat Parliament, is now left with 102 votes, less than the 111 minimum seats required to command a simple majority (after deaths of 2 MPs). All the 11 MPs from Barisan who rejected Muhyiddin are from UMNO, the biggest party in the Perikatan Nasional ruling coalition.
The second blunder – only 21 out of 31 MPs (including 2 MCA MPs, 1 MIC MP and 1 PBRS MP) were present on stage during a press conference with Ismail Sabri today, with claims that the remaining 10 MPs have pledged their support in absentia. Coincidentally and conveniently, top guns like Khairy Jamaluddin and Hishammuddin Hussein were “not free” to join the beauty parade.
Clearly, UMNO warlords like Khairy and Hishammuddin deliberately skipped the political drama as they cleverly play a safe game of not wanting to be seen as either supporting the prime minister or betraying their own party UMNO. In fact, both cunning politicians have been keeping a low profile and pretending to be busy with Covid-19 pandemic since a plan to topple Muhyiddin began.
The third blunder – like Muhyiddin, who had cheated by duplicating names of MPs he claimed of supporting him as the prime minister during the “Sheraton Move” evil plot last year, the idiot Sabri also did the same. At least 3 MPs who had appeared with UMNO president Zahid Hamidi during a press conference to withdraw support for PM Muhyiddin were included in Sabri’s list. 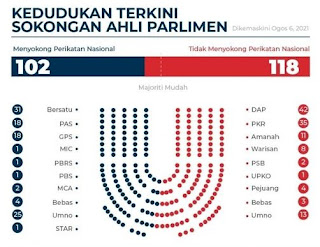 Hours after Deputy PM Ismail Sabri cheated, UMNO MPs – Noh Omar and Azeez Abdul Rahim – stunningly revealed that their signatures were not a pledge of support for PM Muhyiddin, but merely to indicate their attendance at a meeting earlier today which was organized by Sabri, who is also UMNO vice-president. It means without the 3 duplicate names, only 28 BN MPs support Muhyiddin.
Essentially, the support for the illegitimate prime minister is actually at a pathetic 99 votes. But it gets worse as another UMNO leader, Higher Education Minister Noraini Ahmad, has joined the rebels and resigned today, further slashing the number of BN lawmakers who supported the government to just 27 MPs. This reduces Mr Mahiaddin alias Muhyiddin’s votes to 98 in the Parliament.
Now, if the 10 BN MPs who did not attend Sabri’s ceremony suddenly make a U-turn, Mr Muhyiddin’s support will further plunge to just 88 votes. But the best part was the panic remarks spewed by both Sabri and Muhyiddin. The clueless Sabri, infamous for his screw-up in managing the pandemic, has tried to play the royal card in an attempt to intimidate the Opposition.
Ismail Sabri had wanted to spin and twist his gang’s support for the illegitimate PM, claiming that they were the good guys by upholding King Sultan Abdullah’s decree for the Perikatan Nasional government to continue ruling the country until its legitimacy is ascertained in Parliament in September. But his clumsily and recklessly hatched justification backfired.
Agong’s consent, assuming there was indeed one to begin with, was related to the tabling of a motion of confidence in Parliament. There was no royal statement, let alone a royal decree, that says every lawmaker must blindly support the existing government until Parliament reopen again in September. Sabri was trying to put words in Agong’s mouth, which can be treated as treason.
Likewise, PM Muhyiddin, who had previously said he was confident that he still commands the support of a majority of Members of Parliament, appears to have doubts about his own chances today. He questions whether a new government could handle current problems and more issues – suggesting that his regime should be allowed to keep ruling even if it has lost its majority.
Perhaps the traitor hasn’t realized that under his leadership, the country recorded more than 1.2 million infections and more than 10,000 deaths due to Covid-19 in just 17 months since he snatched power in March 2020. At the rate his administration mishandles the pandemic and mismanages the economy, any new government will easily perform better than him. 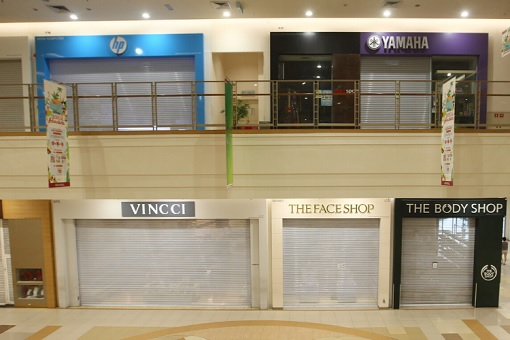 Under Perikatan Nasional, unemployment rate has skyrocketed to 4.8%, foreign direct investments (FDI) has dropped by 68%, some 32,000 small-and-medium-businesses have closed down, Fitch Ratings’ has downgraded Malaysia’s credit rating from A- to BBB+ and the economy – GDP – has plunged by 5.6%, the worst contraction since the 1998 Asian Financial Crisis.
As of June 2021, 30% of shops at shopping malls had closed down and 300,000 workers in retail industries nationwide had lost their jobs over the past 16 months due to failure of the government in containing the pandemic. SME Association of Malaysia also warned that at least 50,000 more small-and-medium-enterprises (SMEs), especially in retail and food and beverages, may be out of business.
In early July, Minister of Entrepreneur Development and Cooperatives Dr Wan Junaidi Tuanku Jaafar admitted that up to 580,000 businesses – representing 49 % of the micro, small and medium enterprise (MSME) sector – are at risk of closing down by October. Malaysia’s MSME sector accounts for close to 40% of the country’s GDP.
IBM, Hyundai, Shell, T‑Systems, Citibank and HSBC are just some of the companies that had either retrenched or relocated to neighbouring countries due to the government’s incompetence and uncertainty over its policies. Heck, even chambers of commerce of German, Japan and the Netherlands had written to express their displeasure over Muhyiddin government’s half-baked SOPs.
Thanks to the arrogant and power-crazy, yet clueless and incompetent government, not only people becomes jobless, poorer and struggle to put food on the table, but hundreds are also dying everyday due to Covid-19 and suicide. Hospitals are overwhelmed while ambulance services could not cope. Which part of these failures that Mahiaddin does not understand?
While the King might have consented to Muhyiddin’s request for his legitimacy to be tested in Parliament, it does not mean the date has been cast in stone. In fact, nothing has been fixed or firmly established. What if everyone rejects the prime minister before September, leaving him with just a handful of MPs, hypothetically speaking? Will Agong be silly enough to say everyone must still wait?
Yes, the monarch may agree to the proposal initially because of confusion and discrepancy in claims from both Zahid and Muhyiddin. The UMNO president showed 11 MPs had retracted their support, but the Bersatu president insisted he still has the support. But the King’s decision was made on Wednesday, before “turtle egg” Sabri’s silly admission today that he has only 31 votes. 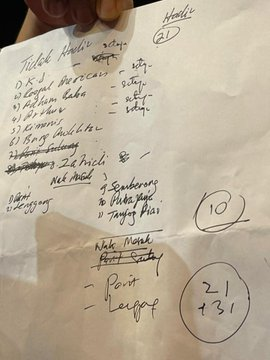 Is this the list that supports PN or
the list of those attending the durian party?...
The impression, or rather lies, created by Ismail Sabri before the meeting between Agong and Muhyiddin was that up to 40 Barisan Nasional MPs were supporting the government. Therefore, the King may have been misled into believing that probably only 2 out of 42 BN MPs rejected Muhyiddin. That would mean Muhyiddin still possessed 111 MPs, a razor-thin one vote majority in Parliament.
In fact, it was not only Ismail Sabri, vice-president of UMNO, who had lied to the King. Nazri Aziz and Deputy Communications and Multimedia Minister Zahidi Zainul Abidin had similarly scammed Agong that 40 Barisan Nasional MPs have signed a statutory declaration to supporting Muhyiddin. Shahidan Kassim had even claimed all 42 BN MPs supported the PM.
However, today’s development, which saw Sabri capable of commanding a mere 31 votes, only to be reduced to 28 after rejections from Noh Omar and Azeez Abdul Rahim, and the sudden resignation from Noraini, clearly shows a totally different picture than that on Wednesday. It’s as clear as daylight that Muhyiddin, armed with only 98 votes, does not enjoy any majority at all.
With the country getting worse every single day, the King cannot disregard the latest facts that the premier whom he had chosen and sworn in as the 8th Prime Minister on March 1 last year is no longer legitimate. As the illegal regime uses the police, anti-corruption agency, taxman and Registrar of Society (ROS) to intimidate oppositions, is the monarch willing to be part of the evil and corrupt scheme?
As exposed by Deputy Speaker Azalina Othman today, the regime may table the motion of confidence “after” the Agong’s royal address, scheduled on September 6, to both trap the Opposition and legitimize the illegal government. Because the royal address is prepared by the government, it would mean recognizing and legitimizing Muhyiddin if the Opposition votes for it.
But if the Opposition votes against the royal address, the evil regime will stir up racial and religious sentiments. Playing 3R cards (race, religion and royalty), it will  accuse the Opposition of not only rejecting the King’s government, but also insults the Malay, Islam and Malay Rulers. PAS Islamist party will scream that the “Chinese, Christians and Communists” are against the Malay Rulers.
Therefore, the motion of confidence must be conducted “before” the King’s royal address (Sept 6). And since self-described stupid Prime Minister Mahiaddin has declared that he was not afraid of any motion of confidence, the monarch should decree for an earlier date, preferably this month, to test his legitimacy – if the PM refuses to resign. It’s as simple as calling a special sitting under Standing Order 11(3). - FT 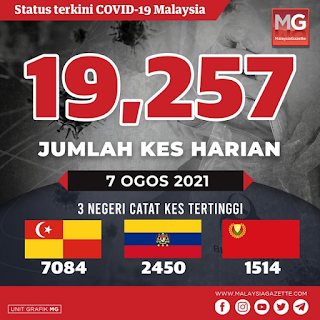