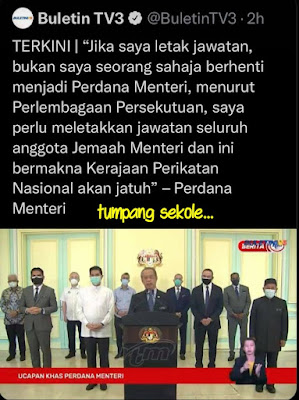 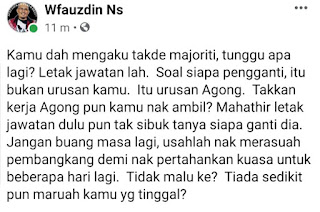 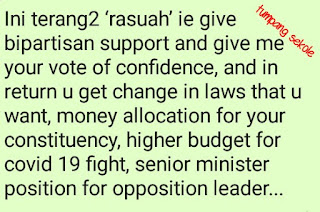 The Federal Court had already ruled that evidence of loss of majority other than that established in the legislative assembly was legally acceptable to compel the Perak MB to resign. In its unanimous judgment on 9th Feb 2010 on the Nizar vs Zambry case in Perak, the 5-member panel even ruled that then incumbent MB Nizar and his Exco were deemed to have vacated their seats when they refused to resign.
This Federal Court ruling remains the law, unless and until it is overturned.Hence, the Agong can legally appoint a new prime minister when he has in his possession sufficient evidence that Muhyiddin has lost his majority, even when Muhyiddin refuses to resign. - kim quek 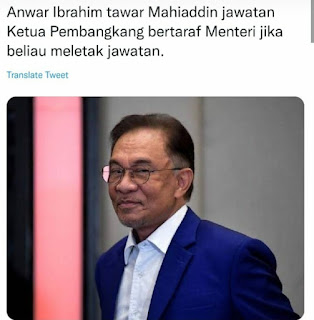 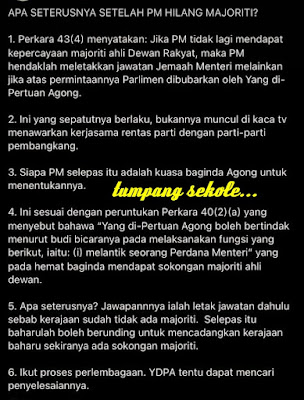 Din now begs for Opposition’s support
in exchange of money/positions/reforms...
The emergence of a letter from House Speaker “Art Harun” Azhar Azizan Harun dated August 3 to the King Sultan Abdullah, informing the Palace that Prime Minister Muhyiddin Yassin had only support from 106 MPs, was the last straw that broke the camel’s back. August 3 was the same Tuesday UMNO president Zahid Hamidi announced the withdrawal of support for the PM.
Including UMNO MP Shamsul Anuar Nasarah, who had earlier resigned as the energy and natural resources minister before Zahid’s announcement, at least 12 UMNO MPs have quit. They are Zahid Hamidi, Najib Razak, Azalina Othman Said, Abdul Azeez Rahim, Noh Omar, Nizar Zakaria, Ahmad Mazlan, Tengku Razaleigh, Ramli Mohd Nor, Ahmad Maslan and Ahmad Nazlan Idris.
Exactly how the despicable and corrupt Speaker Harun arrived at the 106 figure is quite a mystery because “106+12” is 118. But the ruling Perikatan Nasional government had never possessed 118 MPs in the Parliament. Because there were 107 Opposition MPs, the government had only 113 votes at most, after the death of 2 MPs in the 222-seat Parliament.
If the genius Speaker calculated 106 MPs “before” Zahid’s announcement, it means the regime had collapsed much earlier. If he got the number “after” Zahid’s announcement, it means the Speaker had lied to Agong (King). Either way, the prime minister effectively lost his simple-majority as early as August 3 – some ten days ago – therefore, he must resign.
In short, the power-hungry Mahiaddin alias Muhyiddin has been walking around as an illegal and illegitimate prime minister for the last 10 days. That’s why the Palace had sent another letter to the House Speaker on August 9, seeking confirmation from the Lower House of Representative (Dewan Rakyat) again in regards to the latest support possessed by the prime minister.
However, the latest numbers are worse. The scoreboard says at least 120 votes against Muhyiddin’s 100 votes. Clearly, Muhyiddin is 11 votes short of the magic number. With the referee – the King – having flashed the red card numerous times, it’s getting harder, if not impossible, to bribe and buy Opposition MPs to switch sides and join the sinking ship.
Even Federal Territories Minister Annuar Musa, the loudest cheerleader of the backdoor PM, appears to be ready to jump ship. Annuar has urged Art Harun to clarify the letter, which the House Speaker has refused to either acknowledge or deny. Instead of defending his boss, Annuar said if the letter is authentic, then Muhyiddin has lost support and must resign immediately. 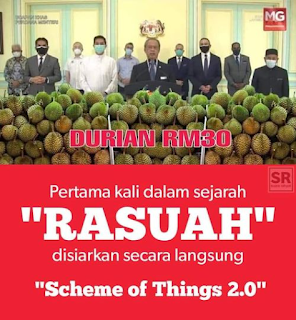 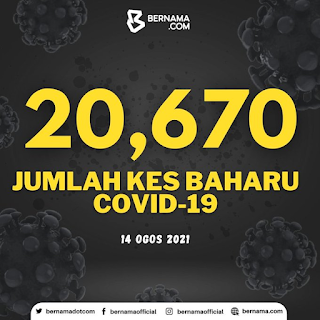