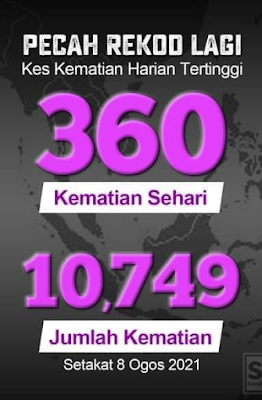 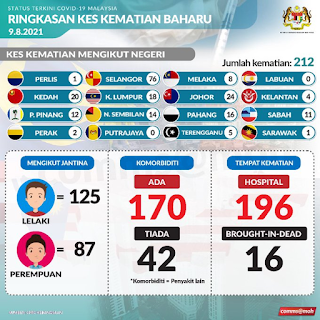 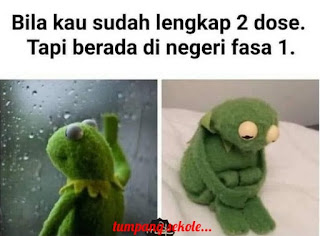 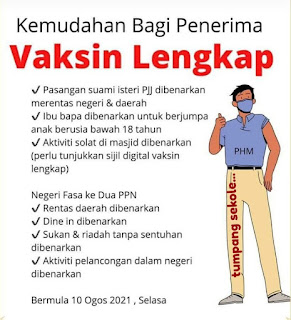 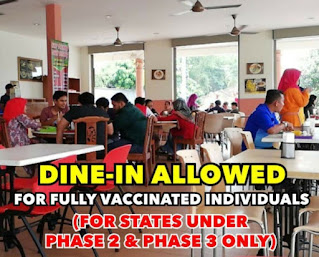 Too soon to announce
easing of restrictions, says MP...
The timing of the government’s announcement to ease restrictions for fully vaccinated individuals cames a bit too soon, according to Gopeng MP Dr Lee Boon Chye, who is a former deputy health minister. He said it would only be fair for restrictions to be eased once everyone registered for vaccination had received their first dose.
A substantial number of people had still not been vaccinated and the relaxed restrictions announced today would expose them to the Covid-19 virus more easily, he said.  “Based on the current rate of vaccinations, all those who have registered will be vaccinated with their first dose in the next two to three weeks. The government should have waited until then to make their announcement,” he said.
Lee said he feared that Covid-19 cases will continue to surge even higher and bring more risk to people who were still unvaccinated. Earlier today, the government announced that movement restrictions would be eased from Aug 10.
Universiti Malaya epidemiology specialist Dr Sanjay Rampal said there was never a safe time for the government to ease restrictions. Sanjay said it has been a very challenging time for the management of the pandemic in Malaysia; despite prolonged restrictions, the country has sustained increased Covid-19 transmission. 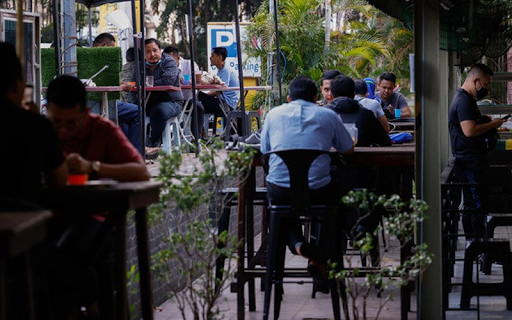 Is it safe to resume dine-in services,
say restaurant owners...
Meanwhile, restaurant associations have questioned whether it is safe for restaurants to be reopened for dine-in service, given the record number of Covid-19 infections and deaths.  J Suresh, president of the Malaysian Indian Restaurant Owners Association, told FMT that while some owners would welcome the easing of movement restrictions from Aug 10, he believes it may not be the right time to do so.
“We were asking to reopen when the number of cases was still around 3,000 to 4,000. Now, when there are more than 20,000 new cases on some days, finally they let us open for dine-ins?” he said. He expressed his personal concern over the reopening of eateries, in view of the high number of cases and deaths, even while more people are being vaccinated.
“I leave it to the individual restaurants to decide whether they feel it is safe to reopen, it’s up to them,” he said. Earlier today, the government announced the resumption of inter-district travel and dine-in services at restaurants in Phase 2 states from Aug 10.
However, Suresh said that restaurants that choose to reopen may struggle to do so, because of the lack of workers. The many months of movement restrictions, leading to low levels of business, has resulted in many restaurants losing the foreign workers they once employed. - fmt 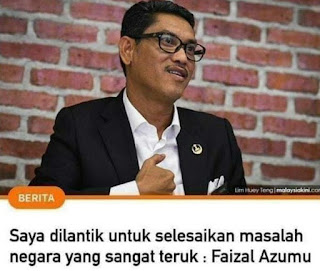 Muhyiddin is scraping
the bottom of the barrel...
This has been a brilliant week for Malaysian gutter politics, although not for the rakyat; but the cherry on the cake has to be the appointment of Ahmad Faizal Azumu as Prime Minister Muhyiddin Yassin's Special Adviser, with ministerial status. One can forgive Muhyiddin for being desperate, but did he have to scrape the bottom of the barrel?
Ever since Dr Mahathir Mohamad's tenure, Malaysian politicians celebrated the art of mediocrity, but did Muhyiddin have to sink this low? Many of his advisers and ministers are thicker than the condensed milk that we liberally pour into our teh tarik every morning.
Does Muhyiddin have to torture the rest of the nation with a man as incompetent, mediocre and devoid of talent as Ahmad Faizal? He could not have done a worse job dragging Malaysians into the gutter. Ahmad Faizal (above) lost the vote of confidence in the Perak State Legislative Assembly, when he was the menteri besar of the state and to all and sundry, he is a failure. Only Muhyiddin thinks otherwise.
The former Perak mentri Besar is living proof that you don't require a degree, competence, hard work or experience to excel. You just need to "ampu-bodek". Within a few years, Ahmad Faizal has risen from junior assistant in a government department, then to Mukhriz Mahathir's aide, to MB and now to a federal minister. The other frogs will be croaking with rage. He has jumped higher than them.
Perakians were subjected to 32 months of Ahmad Faizal's tenure as the Perak MB. Logging contracts worth several hundred million ringgit were allegedly handed to cronies. New cars were bought for the Perak state executive members despite advising the rakyat to tighten their belts. He squandered many opportunities to attract talented Perakaians who had fled to Penang, Selangor, Singapore and overseas, to return and rebuild the Perak economy. So, how will Ahmad Faizal benefit Malaysia?
Is Ahmad Faizal fair? Under him, the Orang Asli were treated like illegal tenants in their own ancestral lands. Like the Musang King durian farmers' scandal in Pahang, vegetable farmers in Chemor were given notices to quit the land that they had tilled for four generations because the land was given as a reward, to players of the Perak football team, just because Perak won against Terengganu in a match.
Does Ahmad Faizal have a head for numbers? He bled the Perak Treasury dry, by propping up the white elephant called the Movie Animation Park Studios (MAPS) theme park. The MAPS was on life support and he was advised to sell it, but he claimed he could make it profitable. He failed. 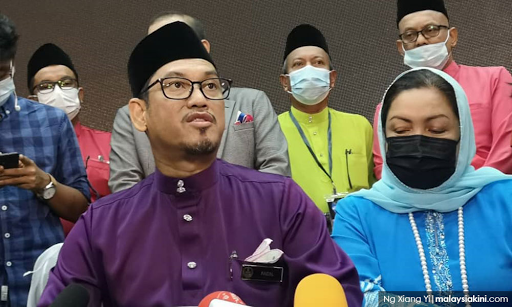 Does he have a flair for business? He could not even complete his studies and yet when he was made MB, Ahmad Faizal gave everyone the impression that he was a business graduate from Edith Cowan University in Perth. He lied about his degree and when the revelations about several elected representatives faking their degrees were exposed, he told a radio station in Ipoh that he had come clean with a press release. To this day, I am still searching for that statement.
Does Ahmad Faizal know the meaning of loyalty and teamwork? How can one trust a man who stabbed his own coalition partners in the back? During campaigning for the Tanjung Piai by-election in November 2019, a video showed snatches of conversation in which he chatted with Umno-Baru members, badmouthed DAP, complained about ministers bickering and boasted that he was the only one defending the Malays (in Perak).
During the video (3.47 to 4.30 minutes long), Ahmad Faizal said that he could not reveal too much at the time, but told the disgruntled people gathered there that a solution would be found soon. This makes me think the Sheraton Move was being planned, and he was privy to it. So, what is Muhyiddin's end-game? Will he promote all the politicians who are good at ampu-bodek and make them ministers?
Why should the taxpayer pay vast sums of money to people who are incompetent to run the country? Why should they enjoy the salary, perks, allowances, cars, drivers, aides, maids and travel perks of a minister? What happened to austerity at a time when the nation is struggling to keep afloat and many people are in the depths of despair?
There are many good, able and competent people in Malaysia, but Muhyiddin cannot count on them to be his aides or his ministers. Anyone with a modicum of intellect would soon outshine him. The job of a reporter is to write without fear or favour. They seek the facts. They try to uncover the truth and write about it. The role of a minister is to act in the interests of the rakyat.
Today, some former editors-in-chief, and former ministers, are crowding social media with their analyses, their comments and their solutions to the Muhyiddin-induced problem. All aim to remain relevant and make their mark, but why didn't they speak out 40 years earlier? If they had not remained silent then, we may not be in this terrible pickle and trying to claw our way out of it.
So, if the current batch of civil servants, heads of industry, union leaders, the inspector-general of police, the attorney-general, army chiefs and academicians are listening, will they speak up now? They are in positions of power - and have more influence than most people - to effect change. Will they? Or are they hoping to become ministers, too? - Mariam Mokhtar 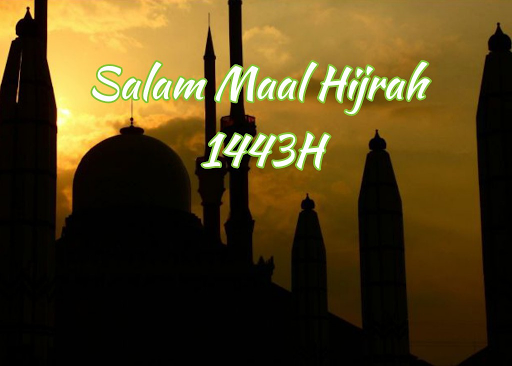 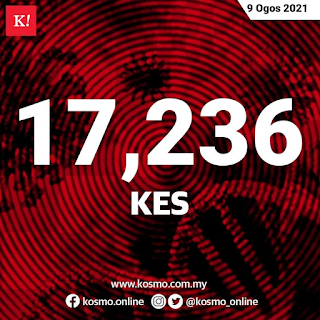