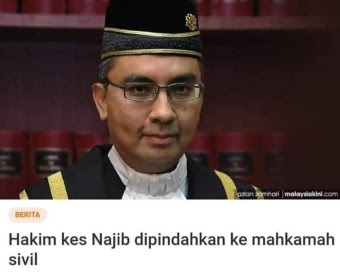 Story kat sini...
Judge Nazlan Ghazali’s learned written judgment convicting Najib earlier impressed me as one of the finest I have read. That this gem of the Malaysian judiciary is now abruptly taken off from a series of impending high profile corruption cases (mostly involving 1MDB) is an unmistakable signal that the dirty tentacles of politics have taken hold of our judiciary to enact political trade-off for the regime’s survival.
Following a series of acquittals of political bigwigs of the BN era, Nazlan’s transfer now confirms that we are firmly on a trend rolling back to the darkest days of Malaysian judiciary. There is no doubt in my mind that we have yet to see the worst of governance without principles and without direction under Muhyiddin’s leadership. - Kim Quek
Malaysian Bar president Salim Bashir and a retired judge both say the transfer of judge Mohd Nazlan Mohd Ghazali is a “normal” matter. Nazlan had found former prime minister Najib Razak guilty of seven counts of corruption last year, making Najib the first former prime minister to be tried and convicted on criminal charges for actions taken while in office. Najib has filed an appeal.
A Bar Council memo yesterday stated that Chief Judge of Malaya Azahar Mohamed had directed Nazlan’s transfer from the Kuala Lumpur High Court (Criminal 3) to the Kuala Lumpur High Court (Civil 2) effective March 1.
“It’s a normal administrative transfer,” Salim told FMT. “The judge is required to finish off his part-heard matters before his transfer date, and if he cannot, then he will need to report to the CJM (Chief Judge of Malaysia) on the status of the part-heard cases for further direction. 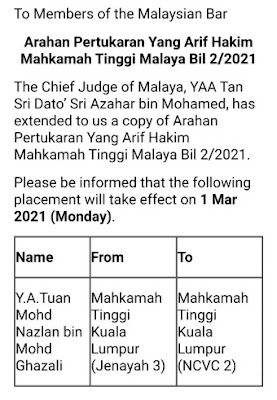 “If the matter is before him and it is part-heard, he needs to speed up hearings on all such matters before the March transfer order.”
The High Court is set to deliver judgment on Feb 3 on whether former Felda chairman Isa Samad is guilty of corruptly receiving about RM3 million from the purchase of a hotel in Kuching six years ago in a case being heard before Nazlan. Nazlan was initially scheduled to preside over the RM6.6 billion criminal breach of trust (CBT) case of Najib Razak and former Treasury secretary-general Mohd Irwan Serigar Abdullah this September.
However, the case will now be heard before High Court judge Muhammad Jamil Hussin according to a letter received by the prosecution from the High Court deputy registrar on Oct 7 last year. - fmt 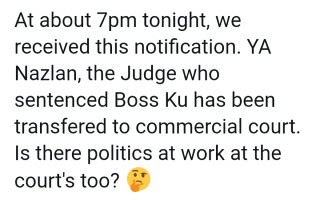 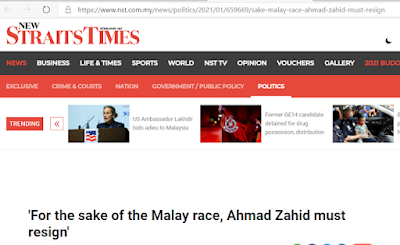 Story kat sini...
UMNO is ignorant
that they are doomed...
At this point in history Umno is facing the threat of going extinct. There are two possible ways that Umno will go extinct.  The first method is if they are in power - which they were for 62 years and they lost GE14. Now they are back in power and they will likely lose GE15. Or not win a majority. This is because when they were / are in power they continue with their usual self - the party leaders become rich and they will work for their own interests. Thats how they lost GE14 and thats how they will lose again.
The second method they will go extinct is when they lose power. Because UMNO is so dependent on money, the moment they lose power they run out of money and the party will just die like a fish out of water. Without money they are out of their element. So either way Umno is doomed.
Making matters worse for this party is their continued insistence on appointing or electing really dumb people to important positions in the party. One such character is Ahmad Maslan IQ 3.85.  Ahmad Maslan continuously makes stupid statements that make him the butt of jokes and ridicule. And since he is now the Secretary General of the party, his antics also reflect on the generally low opinion the majority of voters seem to have about Umno.
From moronic statements like 'only PhD holders would understand the need for a general election now' to his latest suggestion that MPs petition the King - which has been ignored by most UMNO party leaders  "Umno secretary-general Ahmad Maslan’s call to petition the Yang di-Pertuan Agong to hold a special Parliament session has been met with lacklustre support from party MPs." Is the UMNO party too dumb to understand that having these clowns as party office bearers at this lowest point in the party's history will hammer the final nails into Umno's coffin?
The Emergency and the MCO has given Mat Maslan and his boss the lame duck Zahid Hamidi the excuse to postpone the Umno assembly that was scheduled for end January 2021.  Rumour has it that had the assembly been held Zahid, Mat Maslan and others would have come for a serious shelling and possible eviction from their posts. 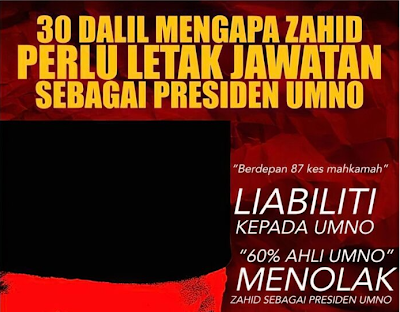 Recently another chicken shit book has been going around "37 Dalil Mengapa Zahid bla bla bla".   This is back to Umno's chicken shit culture of surat layang, backstabbing, secret deals and the usual crap that gets them nowhere.  The party has not changed.
Their president is facing 87 criminal charges in Court and the party still has got no teloq to just tell their president to take a hike.  Instead they have to resort to writing chicken shit books, surat layang and such crap.
They do not know what is leadership anymore. They dont even know how to ride RM45,000 bicycles - they fall into potholes. On a bicycle? The party of doom. - Syed Akbar Ali 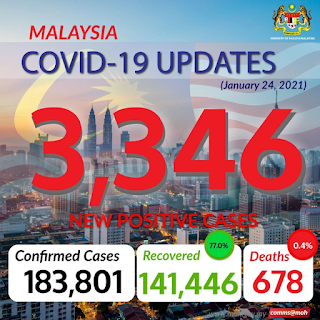 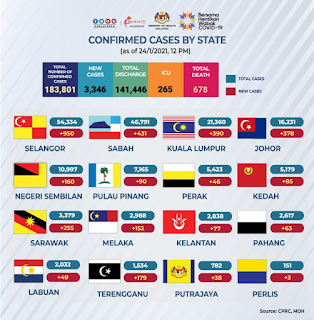